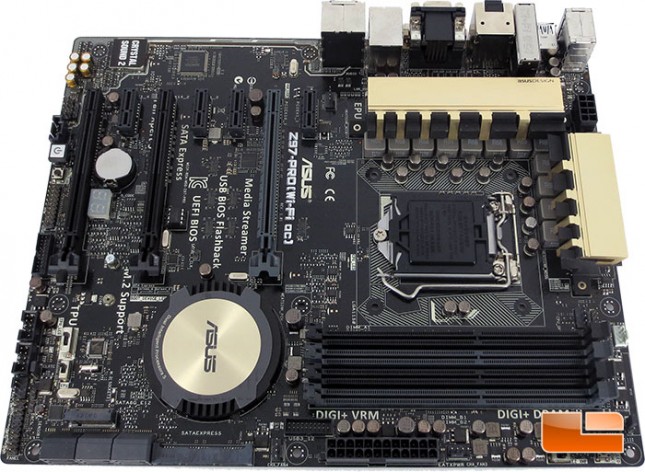 The last generation of Intel motherboards used a golden color scheme to them. That was the first set of boards that may have prevented me from using them strictly due to the colors. I am extremely pleased that ASUS navigated away from the black and excessive amount of gold on their boards for the Intel Z97 series. ASUS is stating that the color is Pewter, but to me that’s pretty much a gold when I look at it. The ASUS Z97-Pro [Wi-Fi ac] does have a dash of gold to it, but the majority of the board is black or grey. This generation is much sharper looking, but ultimately it comes down to function over form for me. 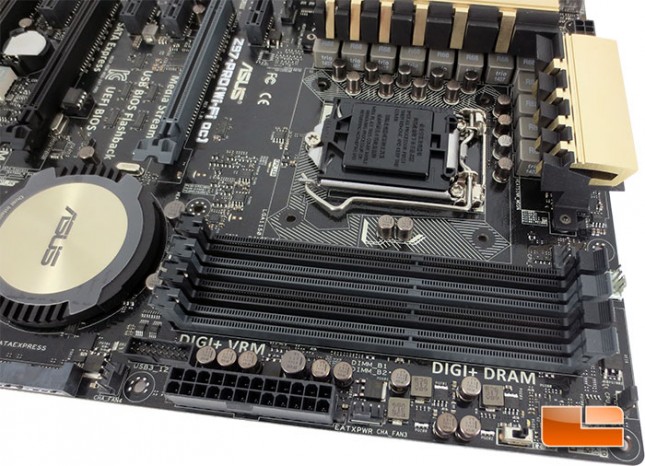 Taking a closer look at the first corner of the ASUS Z97-Pro, there are a couple of things that stand out to me. ASUS continued their use of the single side lock DIMM slots, I have personally become a fan of this style of DIMM slot. When I have other boards on the bench, I’m always a little disappointed that they have the traditional DIMM slots with two locks on them. The ASUS Z97-Pro will support up to 32GB of DDR3 at 3300MHz (O.C.)! On the upper right corner of the DIMM slots is a pair of 4pin fan headers, the white 4pin is the CPU fan header, the grey 4pin is the secondary CPU fan header. Looking along the right edge, there is a jumper that I haven’t come across in the past, it’s labeled CPU_OV. The CPU_OV jumper is a jumper that will allow for higher CPU Over Volting in the BIOS. If you are spending some quality time with some liquid nitrogen or helium, you may be able to use a tad more voltage than some one rocking a all in one water cooler. Hidden behind the LR watermark is the MemOK! button and the EZ XMP switch can be seen to the left of there. Sticking out like a sore thumb is the 24 pin ATX power plug with a 4pin fan header on either side of it. At the top left corner of the 24pin plug is one of two internal SuperSpeed USB 3.0 headers. 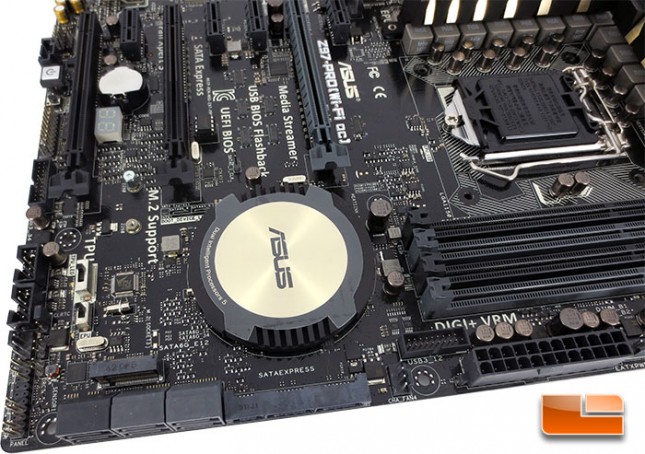 Rotating the ASUS Z97-Pro around, perhaps the most prominent features here is the heatsink, the ASUS logo dead center certainly stands out. Along the bottom edge of the ASUS Z97-Pro we can see a handful of SATA ports, we’ll touch on those more in just a moment as well as the header just behind there. Along the left edge of the PCB, we have the pin out for the front panel switches and LED’s, a 4pin fan header, a pair of internal USB 2.0 headers, the second of two internal SuperSpeed USB 3.0 headers. Just to the inside of the previously mentioned features along the edge, we can see the TPU, and EPU switches and the jumper to clear the CMOS.

The Intel Z97 chipset has six SATA III 6Gbps ports built into it. The ASUS Z97-Pro has eight SATA III ports onboard, the two on the left (dark grey) are from a third party controller, an ASMedia ASM1061 to be exact. The remaining double stacked SATA ports belong to the Intel Z97 chipset. The two remaining SATA ports and the smaller port are all required for SATA Express. If you aren’t planning on running SATA express, the two SATA ports can be used individually as well. 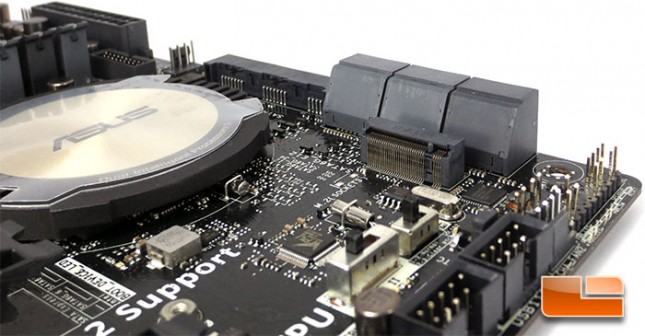 It seems that mSATA is all but dead and gone now, in its place is the latest and greatest M.2 socket. The M.2 socket runs over the PCIe lanes for a much faster interface, but the trade off is losing two PCIe x1 slots as those two lanes are used for the M.2 socket when enabled in the UEFI. 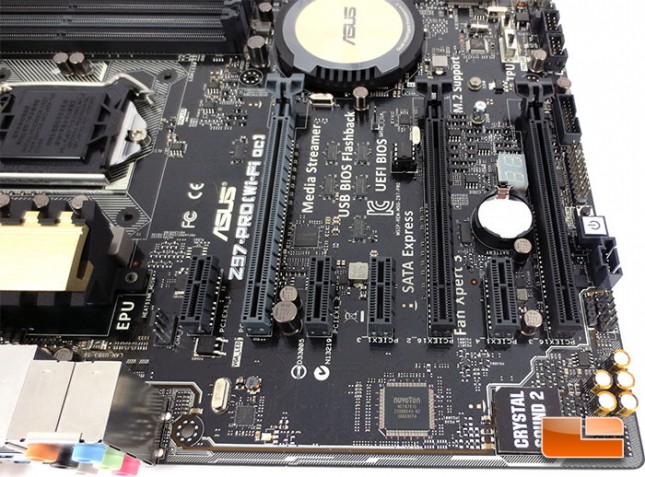 Spinning the ASUS Z97-Pro around once again, the expansion slots are easily one of the most notable features on this corner of the board. The ASUS Z97-Pro features three PCIe x16 slots and four PCIe x1 slots. The pair of PCIe x16 slots on the left are both PCIe Gen 3 and share the 16 lanes while the remaining PCIe x16 slot is PCIe Gen 2 and shares lanes with the PCIe x1 slots. Picking up along the edge of the ASUS Z97-Pro where we left off before, we can see the TPM header, BIOS Flashback button, power switch, and the ThunderBolt header. Separated from the rest of the board is the integrated audio solution. The chip that ASUS is using on the ASUS Z97-Pro is the Realtek ALC1150. The ALC1150 has proven itself as a great chip that delivers great sound, sure it’s not a discrete level card as some prefer but for most it does a great job! On top of the Realtek ALC1150 audio codec is the ASUS EMI protection cover to shield the chip from interference.

This isn’t the greatest picture I’ve ever taken, but sticking a flashlight behind the ASUS Z97-Pro [Wi-Fi ac] shows exactly where the audio is separated from the rest of the PCB. This helps to reduce any electrical interference from the rest of the board and cuts down on any static from it. 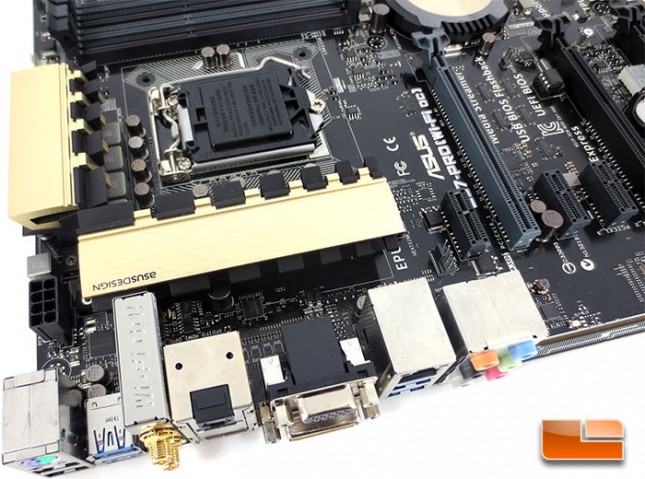 Taking a look at the last remaining corner of the ASUS Z97-Pro much of the excitement will be on the next shot. Though not all of it, the design for the heatsink assembly is pretty slick looking. Typically I’m not a fan of gold, but this isn’t very gaudy or over done. The flat brushed finish rather than a polished finish certainly helps with that. Along the left we will see a familiar sight, the usual 8pin CPU power plug is being used here, with Intel Haswell processors there really isn’t a need for dual 8pins plugs.

The I/O panel on the ASUS Z97-Pro is pretty typical by todays standards. Going left to right, the ASUS Z97-Pro is equipped with a single PS2 port, a pair of USB 2.0 ports, a pair of SuperSpeed USB 3.0 ports, Wi-Fi AC, Bluetooth 4.0, HDMI, DisplayPort, Optical SPDIF, VGA, DVI, Intel Gigabit LAN, a second pair of SuperSpeed USB 3.0 ports, and six 3.5mm audio jacks. The Intel Gigabit LAN is controlled by an Intel I218-V chip tucked on to the PCB. 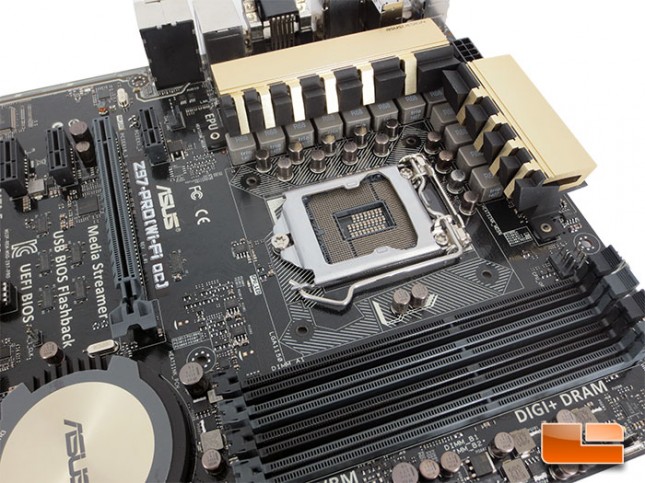 The ASUS Z97-Pro features the Intel LGA1150 socket that is powered by a DIGI+ 12-phase power delivery system. Surrounding the CPU socket is a series of 12 chokes and a handful of high quality solid capacitors, these are all part of the DIGI+ 12-phase CPU power delivery.