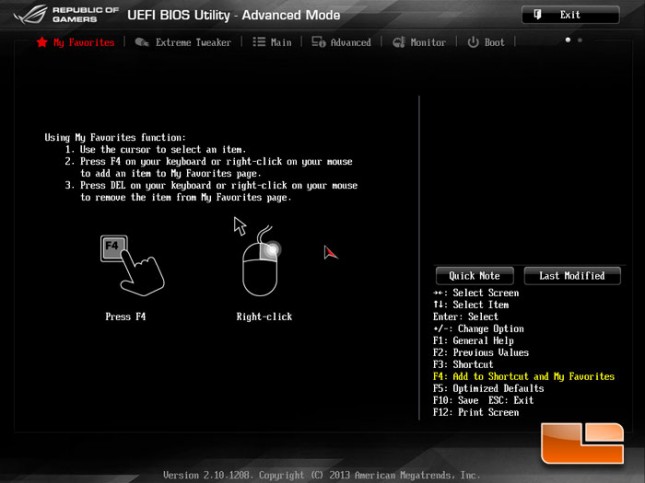 ASUS brought in a bit of an UEFI BIOS update for the Rampage IV Black Edition, like the board, BIOS are blacked out. I’ll admit that I like the overall look and feel of the UEFI BIOS on the RIVBE, though I’ve liked the ASUS UEFI BIOS since they launched them with the original UEFI on the Intel Sandy Bridge platform and P67 chipset. The above page is a recent addition to the ASUS UEFI, it’s a ‘My Favorites’ page and it loads up first. This page lets us add various settings to this page. If you’re overclocking you can add the CPU multiplier, vCore, XMP Profiles, or anything else you may need. I did play with it while overclocking and it was really convenient not having to go to the various pages to get the settings I was looking for.

The two galleries above feature the Extreme Tweaker pages from the ASUS Rampage IV Black Edition. The Rampage IV Black Edition has just about every option under the sun when it comes to system settings, and anything to do with overclocking, DRAM, System timings, Voltages, Digi+ III or any number of other system settings can be found on these pages.

The first picture in the above gallery is the ‘Main’ Page of the ASUS Rampage IV Black Edition UEFI BIOS. This page gives us the basic info about the system and hardware that we are using. The remaining images in the gallery are from the advanced tab of the UEFI BIOS. These pages include the CPU Configuration, SATA configuration, USB configuration, as well as several others including the ROG Effects that control the onboard LED’s.

This gallery features the Monitor, Boot, Tools, and the Exit pages of the ASUS Rampage IV Black Edition UEFI BIOS. From the monitor pages you can tweak and monitor your fan speeds and monitor your system voltages. The tools page allows you to update the UEFI BIOS, see the memory SPD’s, utilize the ROG SSD Secure Erase, access your overclocking Profiles and configure the ROG OC Panel H-Key.