Following our standard motherboard overclocking procedure, within the BIOS we adjust the CPU Core Ration to Sync All Cores, and adjust the CPU Core Ratio Limit to do some simple overclocking.  We will adjust it to start at 45 (4.5GHz), once we boot successfully, we will run several benchmarks to check for stability.  Assuming these are successful, we will increase the multiplier by 1, until we get a failure. 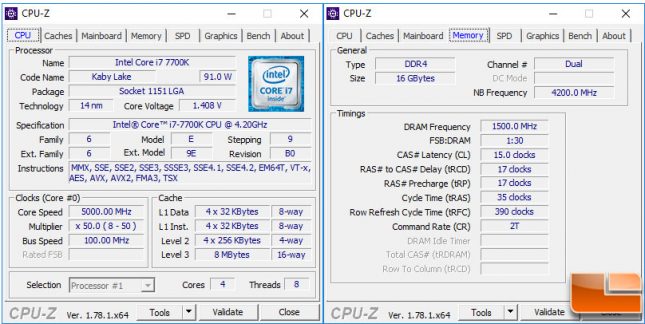 The ASUS Prime Z270-A was able to easily achieve a 5.0GHz overclocked with the Intel i7-7700K processor.  The CPU voltage was set to Auto, so it pulled what it needed, which turned out to be 1.408V, according to CPU-Z.  We took the CPU to 5.1GHz, which caused Windows to fail to boot, setting the voltage to 1.45V we were able to boot into Windows, however several of the benchmarks were unsuccessful.  Changing the voltage back to Auto, we tried 5.2GHz, however the ASUS Prime Z270-A failed to post.  So far, it seems that 5.0GHz is the fastest we can push this particular hardware set.

The Kingston HyperX Fury DDR4 kit, has an XMP profile of 2666MHz which was configured in the BIOS correctly.  Overclocking the memory, we took the memory to 3000MHz, and everything ran successfully.  Going beyond that to 3100MHz, the system was unstable and would blue screen at various points.  On the previous generation motherboard, Z170, this memory kit was able to go beyond 3000MHz on very few motherboards.  For the most part, the average was 2933MHz for the Z170 chipset.  We believe that overclocking the memory is limited to around 3100MHz

Let’s get to running some benchmarks and see how the Intel i7-7700K and the ASUS Prime Z270-A work together.