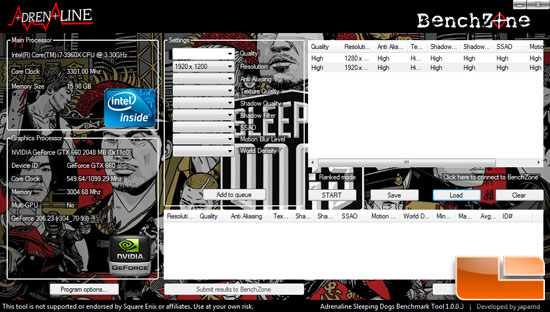 Benchmark Results: With ‘High’ image quality settings both the ASUS ARES II and the NVIDIA GeForce GTX 690 were able to run Sleeping Dogs without and issues. The difference at 1920×1080 was minimal, but we found the ASUS ARES II to be ~41% faster at 2560×1600!

Since both cards were able to run this game title fine with ‘High’ settings we figured we’d crank it up to ‘Ultra’ and see what happens. Benchmark Results: With ‘Ultra’ image quality settings both the ASUS ARES II and the NVIDIA GeForce GTX 690 took rather significant performance hits. On our Dell 30″ monitor running a screen resolution of 2560×1600 we found the performance gap between the two cards got even larger! In this benchmark we found the ASUS ARES II to be 57.6% faster than the NVIDIA GeForce GTX 690!