We’ve never included results from mining Ethereum in a gaming GPU review before, but let’s face more miners are buying video cards right now than gamers and many gamers have been mining to get a little extra income or pay for their expensive gaming graphics card. 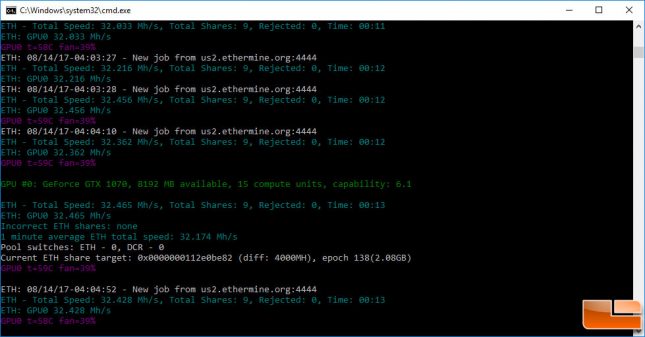 We fired up Claymore’s Dual Ethereum AMD+NVIDIA GPU Miner v9.8 and did some quick testing on DAG epoch #138 (2.08GB) with the latest drivers for each card. 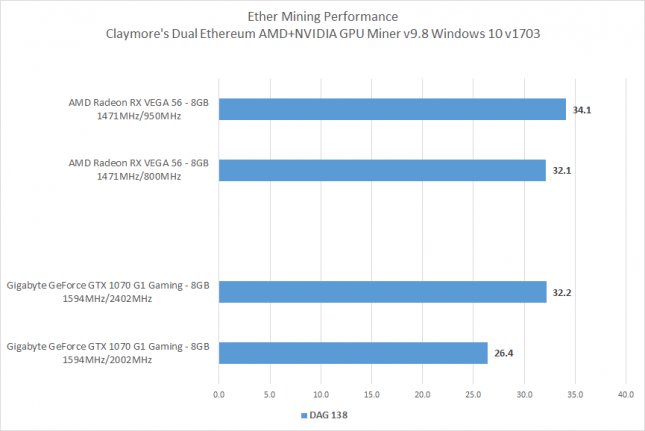 We aren’t going to get into too much detail here since the focus of this article is gaming, but the AMD Radeon RX Vega 56 gets around 32 MH/s out of the box versus around 26.5 MH/s on the GeForce GTX 1070. If you overclock the memory on both cards you can improve significantly, so with the memory pushed to the max on both card we were getting 34 MH/s on the Vega 56 versus 32 MH/s out of the GeForce GTX 1070. With the overclocked settings we were getting 367 Watts at the wall on Vega 56 versus 183 Watts on the GeForce GTX 1070 and that was done with the power target/limit reduced as far as we could on each cards respective overclocking utility.