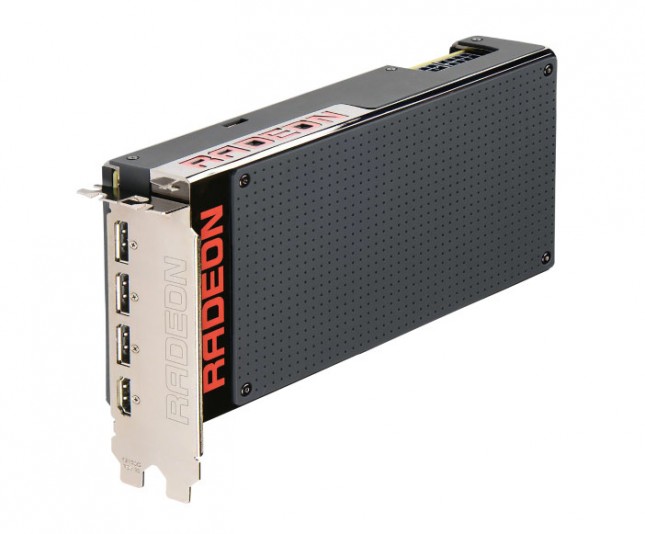 The AMD Radeon R9 Fury X features the brand new AMD Fiji GPU and is the first graphics card to hit the market with High-Bandwidth Memory (HBM) technology. We’ve been talking about this card so much in recent weeks it really feels weird to be writing the launch article as there really isn’t anything new to tell you besides our own internal benchmark results that were done independently by us. We’ve already given you an in-depth look at High-Bandwidth Memory, given you an overview of the Fury X, completely torn down the Fury X, and even shown you the benchmarks that AMD did internally and published. AMD had so many leaks on this card that last week they allowed all the information in the reviewers guide to be published last week! 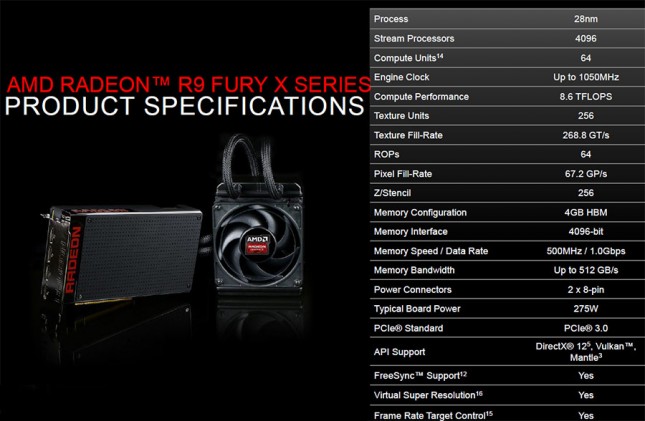 Since there is a chance that you don’t know what the AMD Radeon R9 Fury X is, we’ll do a quick recap. The AMD Radeon R9 Fury X video card features the brand new AMD Fiji GPU that features 4096 stream processor and has 8.9 billion transistors. This is the first GPU that utilizes HBM Gen 1 technology from SKHynix and the card has four 1GB memory stacks located around the GPU die on an interposer. The total number of transistors on the interposer is over 10 billion! The AMD Radeon R9 Fury X is clocked at 1050MHz on the core and 500MHz on the HBM, which is good for 8.6 TFLOPS of power. The 4GB of HBM1 operates on a very wide 4096-bit memory interface and the 500MHz clock speed allows for up to 512 GB/s of memory bandwidth. Interestingly, AMD increased the number of texture units on the card to 256, but kept the number of ROPs at 64. This puts the texture fill rate at 268.8 GT/s and the pixel fill-rate at 67.2 GP/s.

When it comes to pricing we have been told that the AMD Radeon R9 Fury X will be priced at $649, which just happens to be the same price as the NVIDIA GeForce GTX 980 Ti. The nine new cards announced by AMD in June 2015 with announced suggested retail prices can be found below. 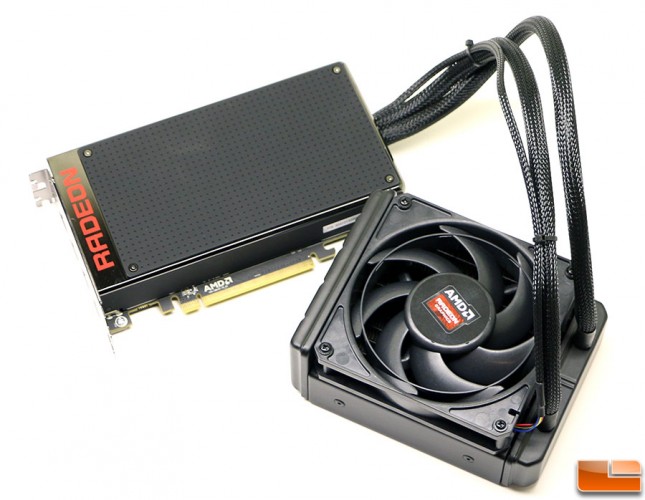 The AMD Radeon R9 Fury X measures 194mm in length or 7.64-inches in length and utilizes a closed loop water cooler that features a 120mm radiator and fan. The water cooler was designed by Cooler Master specifically for this video card. The cooler features anti-kink plastic water tubing that is 400mm in length and has been individually sleeved, so youll have three 400mm long connectors going between the card itself and the radiator. AMD went with a Scythe Gentle Typhoon 120mm Fan for the AMD Radeon R9 Fury X reference design. The exact model number is D1225C12B7AP-29 and it tops out at 3,000 RPM. This 120mm fan has a stabilizing ring on the fan blades to help keep noise down and to handle high resistance when used on radiators in applications such as this. 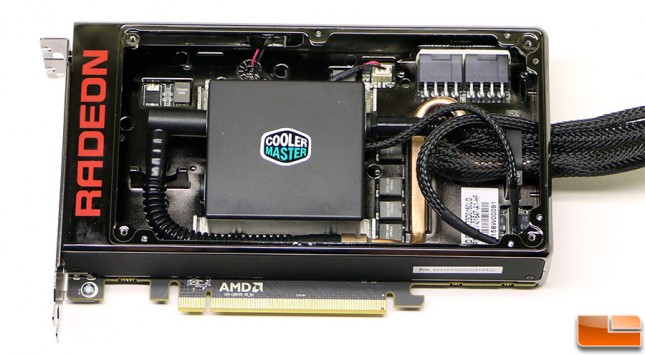 AMD improved the build quality of the Radeon R9 Fury X video card and moved to a multi-piece aluminum die-case construction with soft-touch side plates that are removable. The exposed metal is all black nickel aluminum that has been polished. AMD is thinking about releasing all the data needed to 3D print your own side covers and we hope they do as that would be need to make your own side panels for the card. AMD sleeved the fan separately from the cooling tubes to allow enthusiasts to change out the fan if they desire to do so at a later time. You can better see this with the side cover removed. The radiator uses the standard 120mm mounting configuration and should fit in most any case sold on the market in recent years. 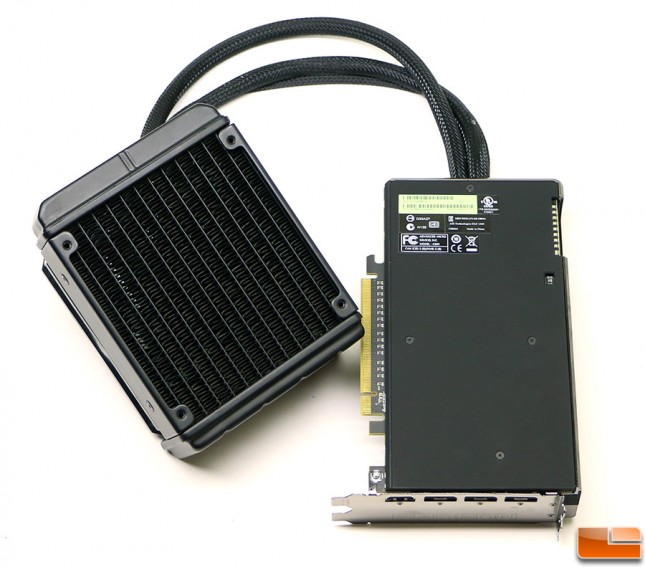 One other new feature on the AMD Radeon R9 Fury X that has never been used on a GPU before is the addition of the GPU Tach. AMD soldered down nine LEDs on the back of the card just below the power connectors that allow you to see the GPU load level. There are two DIP switches on the backplate that allow you to enable or disable the GPU Tach and allows you to change the color of the LEDs between red and blue to go with your case theme better. Eight of the LEDs are for the GPU load level and can be red or blue. The ninth LED light is green and when it is lit up it visually lets you know that the GPU is in AMDs ZeroCore power mode. 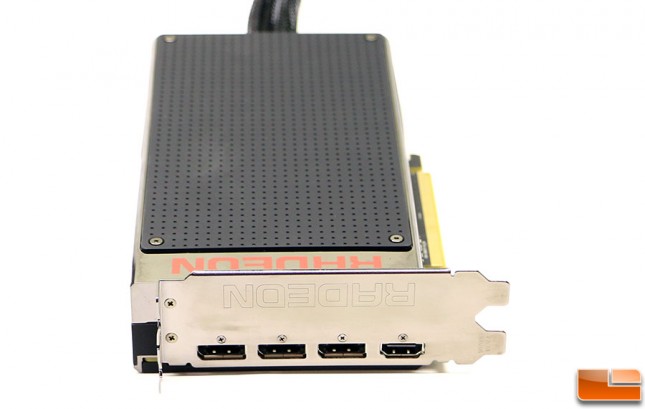 The AMD Radeon R9 Fury X features three DisplayPort 1.2a connectors and one HDMI 1.4 connector when it comes to display options. For some reason AMD did not add support for HDMI 2.0 on this graphics card, which means you won’t be able to run a 4K Ultra HD panel at 60Hz over HDMI. It is for this reason that AMD recommends using DisplayPort for 4k60 content. 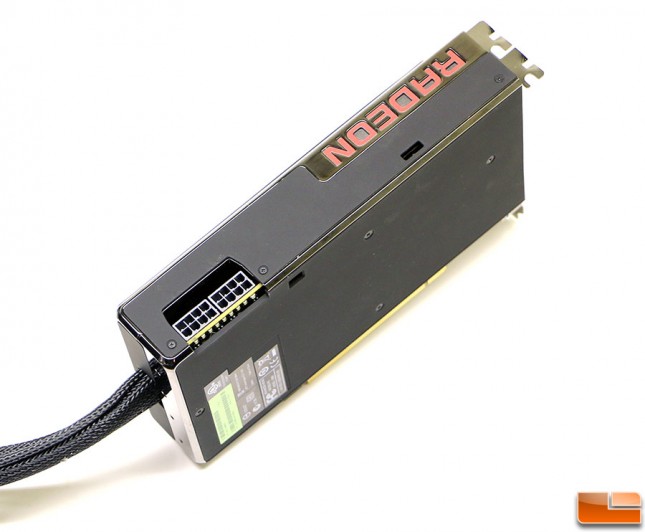 The AMD Radeon R9 Fury X is a 275W card that has two 8-pin PCIe power connectors on it. The Radeon R9 Fury X has a 6-phase power design that is capable of delivering up to 400 Amps of power to the Fiji GPU. The water cooler is rated at up to 500W, so it should be large enough to allow for some decent overclocks. Overclocking should not be limited by the power to the GPU or the reference GPU cooler! 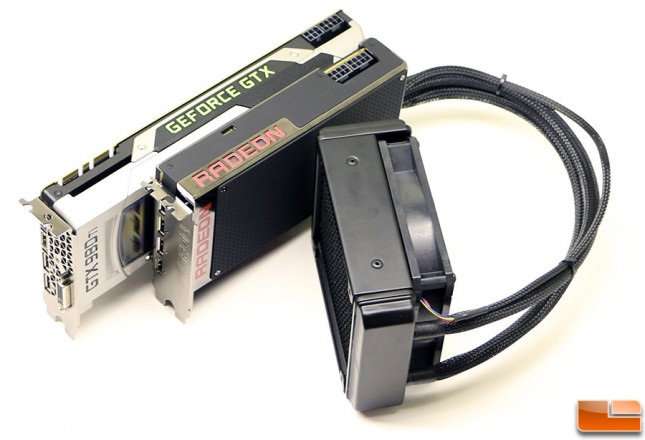 Let’s move along and take a look at the Radeon R9 Fury X does against other cards like the GeForce GTX 980 Ti!