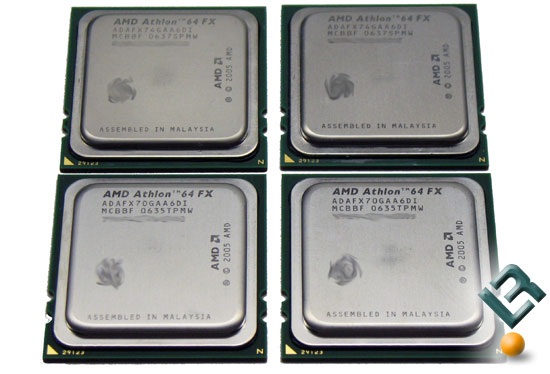 The AMD QuadFX FX-70 test system ran very well and overclocks better than expected for a system that is running two processors for a total of four cores.  Sadly, even when overclocked the pair of FX-70 processors just didn’t have enough to pass up the non-overclocked Intel Core 2 Quad QX6700 processor. It is now crystal clear that the dominance Opteron based platforms once had has been clearly uprooted by Intel’s Core 2 microarchitecture and taken to the next level with their quad-core solution.

When it comes to building a QuadFX system there is only one motherboard available to use and that is the ASUS L1N64-SLI WS. The ASUS L1N64-SLI WS motherboard will set you back $419.99, which is pricey to say the least.  AMD also recommends using the expensive PC Power & Cooling 1000W power supply (or equivalent) to ensure the system has enough power. With a pair of FX-70’s and the ASUS L1N64-SLI WS motherboard one will find that it will set you back ~$1120 for both. Keep in mind there are two processors to cool and each processor has two banks of memory to fill.  If one wants to improve cooling then two water blocks or heat sinks will be needed, which doubles the heating or cooling bill in many situations.  In the same price range one could also pick up an Intel Core 2 Quad Q6600 processor at $879.99, which has numerous motherboards and chipsets that can be used from the $100 price range to the $400 price range. By overclocking the FX-70 processors we were able to improve the price versus performance ‘value’, which does help bridge the performance gap between the AMD QuadFX and Intel Quad-Core Kentsfield solutions.

The AMD QuadFX platform is a success in the sense that it works and has helped bridge the performance gap that was present before its launch. AMD has already annouced that the QuadFX platform will support their first quad-core processors that are code named K8L (greyhound)and planned for later in 2007. Greyhound is rumored to be the first quad-core AMD chip to use the HyperTransport 3 bus, and the memory controller will support both DDR2 and DDR3. It looks like K8L couldn’t get here fast enough!

The Legit Bottom Line: On 32-bit Windows XP Pro the QuadFX platform hangs close, but just can’t keep up with Intel’s Quad-Core processors right now.  Our $4,000+ QuadFX test system is a pricey system for something that offers dubious benefits.