Processor Performance on Pov-Ray 3.7 Beta 13a: 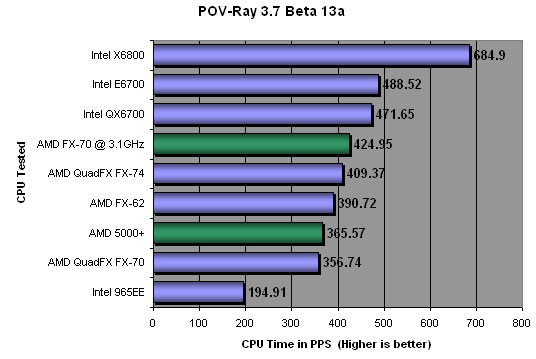 The pixel rate counter (PPS) in POV-Ray is based off of the number of pixels rendered in the current frame divided by the total amount of time spent on the whole animation. This gives the effect of dividing the true pixels per second by the current frame number. With POV-Ray 3.7 Beta 13a we are able to look at a recent SMP benchmark to judge the differences between AMD and Intel dual-core processors. The benchmark shows that the Intel Core 2 Extreme Processor X6800 is over three times faster than the previous generation Intel Extreme Edition processor. The old Pressler core is no match for Conroe in this benchmark! In a benchmark that AMD used to own it is now getting beat. The QuadFX FX-70 system that we are looking at today comes in near the bottom with a score that isn’t too impressive. 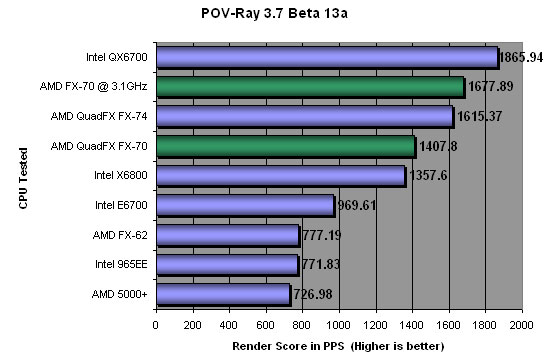 Looking at the overall render score the winner is clear by a long shot.  The Intel Core 2 Extreme processor QX6700 blows the other processors away and more than doubles the performance levels seen on the AMD FX-62 processor, but once again take note that the Quad FX system places second and third.  When our system was overclocked from 2.6GHz to 3.1GHz we saw a nice increase in the score.