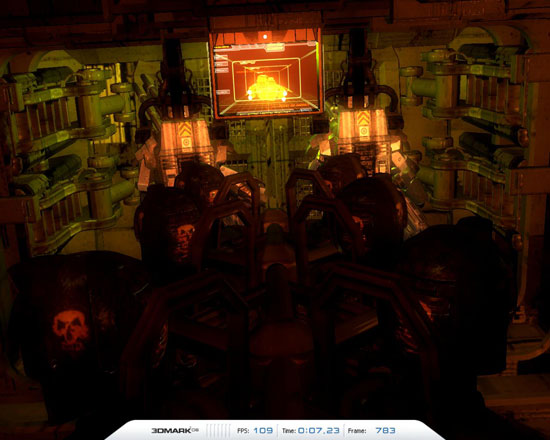 3DMark06 includes an array of 3D graphics, CPU and 3D feature tests for overall performance measurement of current and future PC gaming systems. With this broader design approach, 3DMark06 has become the benchmark of choice for all PCs with top-of-the-line graphics hardware and CPUs. 3DMark06 is the first product from Futuremark using the AGEIA PhysX software physics library in two very complex, game-like threaded CPU tests conceived to measure properly performances of single processor, multi-core and multiple processor systems in next generation of games. In addition to using real-time physics, both CPU tests also employ multi-threaded artificial intelligence algorithms. By combining the results of the two CPU tests and four graphics tests, 3DMark06 enables users to get a 3DMark score which reflects the overall gaming performance of their PC. 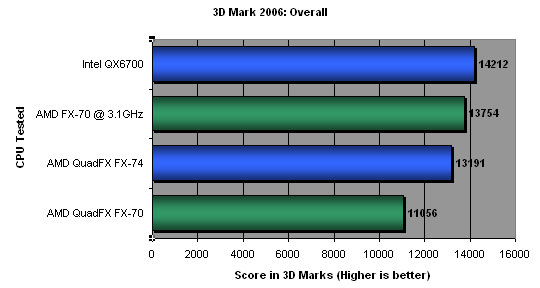 With both processors at stock speeds we were happy to see both processors and platforms hitting overall 3D mark scores like the ones above. These GeForce 8800GTX’s can take every CPU MHz you can give them and with the QuadFX platform overclocked we saw a nice gain. 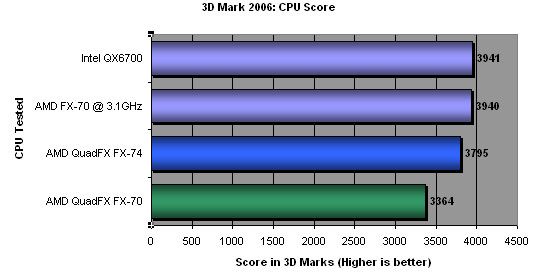 In the CPU test the Intel QX6700 was able to best the QuadFX FX-74 platform by nearly 600 points, but when we overclocked the FX-70’s the score was identical.