Legit Reviews was e-mailed by one of the developers over at POV-Ray to see if LR could include real-time raytracing in our performance analysis of Kentsfield and Quad FX.  After spending a bit of time to get the beta software to work correctly LR has some of the only real-time raytracing numbers available for Conroe, Kentsfield and Quad FX platforms.

E-Mail From POV-Ray — I thought I might ping you about an experimental feature we’ve added to the POV-Ray SMP beta: real-time raytracing. It’s mostly useful to folks who have multi-core systems and in fact is something that I’ve wanted to do for years but the hardware just wasn’t there (at least not in the consumer price range). It works best on a kentsfield or later, but a core 2 duo should be sufficient if you don’t mind sub-10fps frame rates.

If you want to try it out it please feel free to grab it from:  http://www.povray.org/beta/rtr/

This experimental software by POV-Ray was a welcomed addition to our testing and was able to spread the work load across the four processors as seen above. The number that is used to gauge performance is shown in the status bar at the bottom of the main window as seen in the above image of with Intel Core 2 Extreme QX6700 taking care of the rendering. 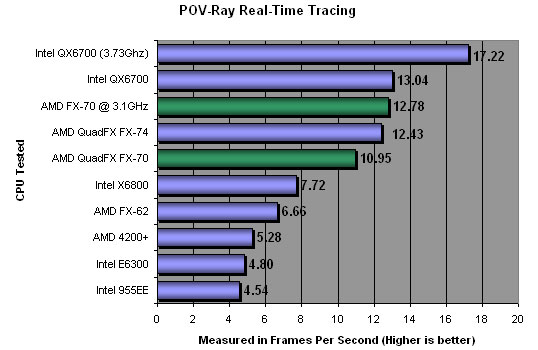 The Intel QX6700 processor takes the lead at default clock speeds and when overclocked it shows without a doubt what CPU is the best on this benchmark.  The AMD QuadFX FX-70 test system did well and came in at 10.95 Frames Per Second. When overclocked it was able to pass up the more expensive QuadFX FX-74 system thanks to the 7MHz boost on the front side bus during the overclock. Here we see where an overclocked to the max QuadFX system still can’t touch the 2.66GHz Intel QX6700 at all default speeds.