That changed last month when Samsung’s Elpis 8-channel controller was introduced on their flagship 980 Pro drive series. The only problem is that this is yet another high-end controller and is only currently available on Samsung branded products. The Samsung SSD 980 PRO 1TB SSD was introduced at $229.99. When will there be a good budget solution for those that are waiting for the best bang for their buck? There has to be a PCIe Gen4 drive coming to market that features better performance than PCIe Gen3 drives have to offer at a great price point.

Well, today is your lucky day as the XPG GAMMIX S50 Lite SSD was introduced exactly one month ago and the first sample just arrived here at Legit Reviews last week. This drive uses the brand new Silicon Motion SM2267 PCIe Gen4 4-channel controller! It costs less to manufacture since it only has 4-channels, so the XPG GAMMIX S50 Lite 1TB drive has an MSRP of $149.99 and the 2TB model has an MSRP of $299.99. This is the first time that a PCIe Gen4 NVMe SSD has launched at $0.15 per GB!

When it comes to performance the XPG GAMMIX S50 Lite series delivers sequential speeds up to 3900 MB/s read and 3200 MB/s write on a motherboard with a PCIe 4.0 interface. If it is run on a PCIe 3.0 motherboard, the S50 Lite will be a little slower and will top out at 3400 MB/s read and 3000 MB/s write. Random 4K performance peaks at 490,000 IOPS read and 540,000 IOPS write thanks to the Dynamic SLC Caching and DRAM Cache Buffer. XPG says these performance numbers are more than enough for video editing, animation and gaming.

Another nice thing about the XPG GAMMIX S50 Lite is that it is backed by a 5-year warranty and has healthy endurance ratings since it uses IMFT 96-layer TLC NAND Flash. You are looking at endurance ratings of 740 TBW for the 1TB model, 1480 TBW on the 2TB. 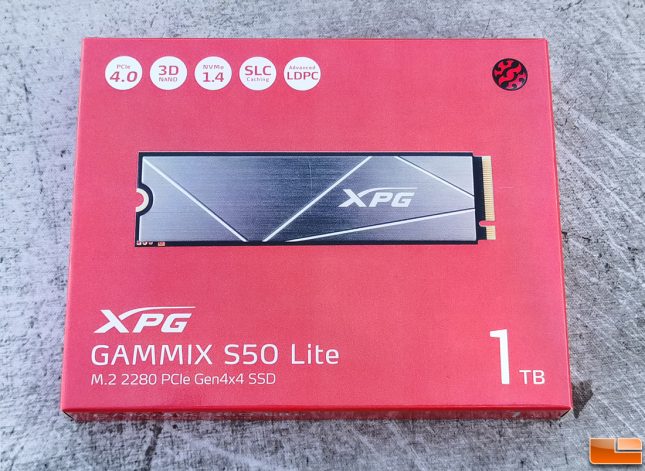 ADATA Technologies sent over the XPG GAMMIX S50 Lite 1TB NVMe SSD for us to test on our AMD Ryzen X570 platform. The part number on the drive that we received was AGAMMIXS50L-1T-C and is just now becoming available to purchase at many retailers and etailers.

The XPG GAMMIX S50 Lite 1TB and 2TB models are double-sided M.2 2280 NVMe SSDs that come come clad with a pre-applied aluminum heatsink on the top. ADATA claims that the heatsink helps reduce temperatures by up to 20 percent on their test platform that consists of the MSI X570-A Pro motherboard running Windows 10 v1909.

The back of the drive has a label with all the drives general information along with the usual regulatory markings. Nothing else was included with the drive, so you get the S50 Lite in the box! 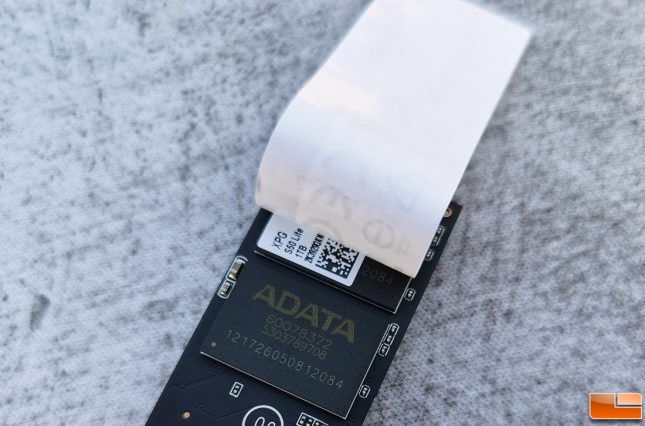 We peeled back the sticker off the top of the drive to see what the TLC NAND Flash looks like and we discovered ADATA branded IC’s. So, you have two of these chips on the front and two on the back for a total of four Micron 96-Layer TLC NAND Flash chips – Micron B27B for curious minds. 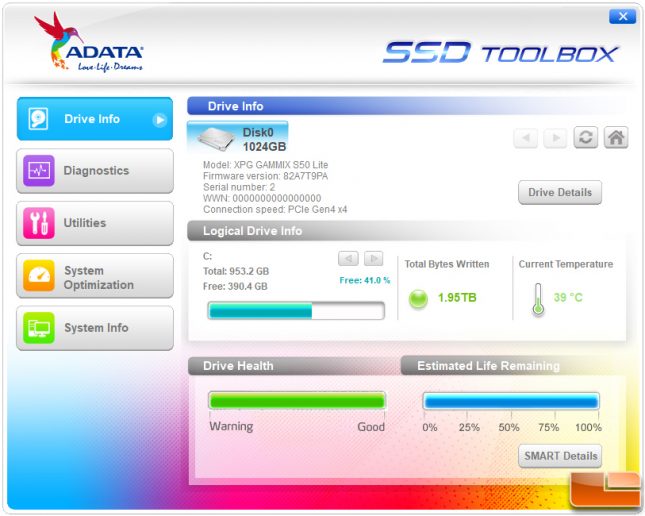 The ADATA SSD Toolbox works on the S50 Lite series, so be sure to download the free utility if you’d like to manage your drive. You also have access to a build of Acronis True Image HD, which is a popular disk migration utility with the purchase of this drive. These two programs will ensure your drive is running smoothly with the latest firmware version and will ensure data migrations are stress free!

Let’s take a look at the test system and then show you how the XPG S50 Lite did on a bunch of different performance tests!