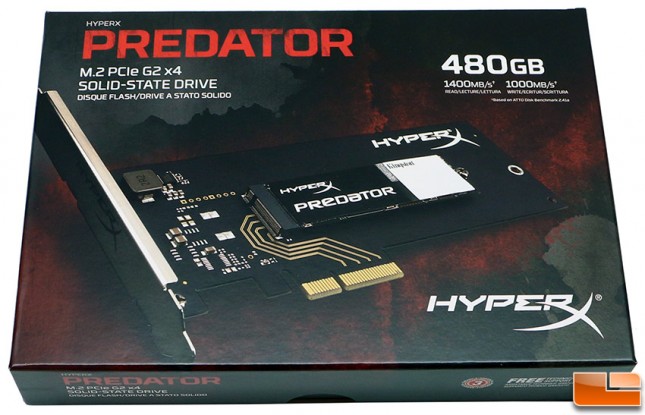 It is fairly clear that M.2 (formerly NGFF) SSDs that use the PCI Express interface is going to be the sweet spot for enthusiasts, gamers and power users. The SATA interface isn’t going to go away, but SATA III has most certainly become a bottleneck issue and SATA Express with its new connector has failed to take off since being introduced in early 2014. We are still in the infancy of PCIe SSDs, but the prices and performance are now right for the enthusiast market. Storage drives that are using the M.2 form factor are pretty nifty as most brand new motherboards on the market today have a M.2 socket on them and you no longer need power or data cables for your SSD. This makes for a clean installation that looks pretty stealthy. For those that don’t have a desktop PC that has native support for a M.2 SSD you can always go with the PCIe add-in card in order to use a drive like this. Kingston let us know that the Boot ROM code is on the HyperX Predator PCIe SSD and that it should be bootable on pretty much any system as look at the BIOS supports a bootable device on the PCIe slot you are wanting to place the card in. Kingston has tested the HyperX Predator PCIe SSD back to boards using the Intel P67 chipset with great success, but found Intel 5 series chipsets were a bit hit and miss. If you have an Intel P55/H55/H57 board you might want to update your core system before plopping in a cutting edge storage drive like this anyway!

Performance on our Intel Z97 platform was excellent with sequential file transfers topping out at 1429 MB/s read and 1001MB/s on benchmarks like ATTO. Those performance numbers are more than what you could get from a RAID 0 array and a pair of high-end SSDs just a few years ago, so we are in a really exciting period of time with regards to PC storage options. The 4K read/write performance numbers of the HyperX Predator PCIe SSD are comparable to other SATA III SSDs as random 4K performance has yet to be limited by the SATA III interface. 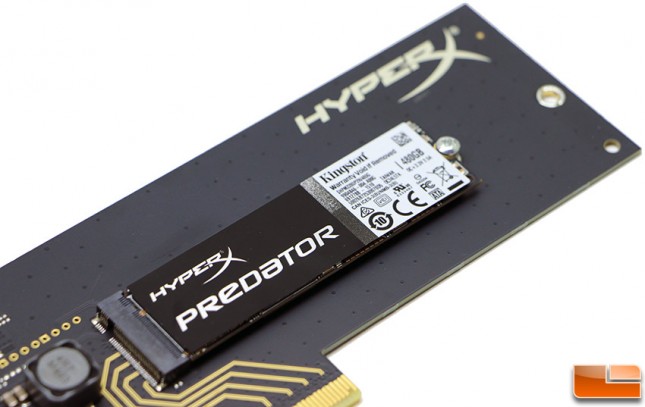 When we first learned that the HyperX Predator 480GB M.2 PCIe SSD was going to run $764 without the PCIe add-in card we were honestly a bit disappointed. Not too many enthusiasts are able to justify spending nearly $800 for a 480GB SSD no matter how awesome the performance is. The good news is that this is just the MSRP and on launch day the HyperX Predator 480GB M.2 PCIe SSD could be purchased for $458.74, which comes out to being $0.96 per GB! The model we looked at today is $469.74 as the add-in card apparently adds about $11 to the retail price. This price point is very competitive with products like the Plextor M6e 512GB M.2 SSD with the add-in adapter that runs $516.78 shipped. Kingston is the easy choice though as they are using a newer Marvell controller, has better performance numbers and costs less. The only place where Plextor is able to look better is on the warranty. Plextor has a 5-year warranty and Kingston has a 3-year warranty. Kingston is being very conservative with the warranty period on their flagship HyperX drive for some reason. Hopefully Kingston will become more competitive on the warranty front as most all high-end SSDs have at least a 5-year warranty.

At the end of the day the HyperX Predator PCIe SSD was found to be a great little SSD that should appeal to high-end users that are building a new system or are looking to try out their very first PCIe SSD. The performance on the drive is pretty solid, but it is lacking NVMe support. The Advanced Host Controller Interface (AHCI) will soon be replaced by NVMe. NVMe was designed from the ground up for PCI Express SSDs and helps improves the latency and parallelism in the host hardware and software for more efficient storage performance. Only Windows 8.1 and Windows 10 offer native NVMe support though and you’ll also need a motherboard that has a proper UEFI update that supports NVMe. Right now there isn’t a consumer NVMe product on the market, but they are coming. The next HyperX Predator PCIe SSD will likely have NVMe support and feature PCIe Gen 3.0 x 4, but that is way down the road and might not even be coming to market in 2015.

Legit Bottom Line: The HyperX Predator 480GB M.2 PCIe SSD is the fastest consumer SSD that we have ever tested!