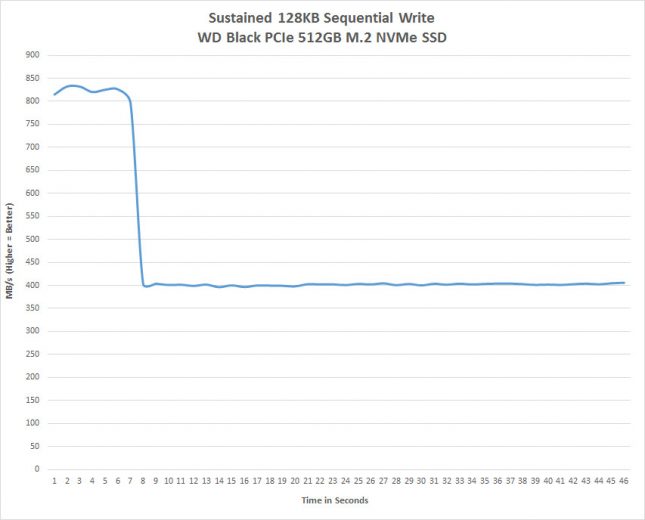 We secure erased the drive before running this test and found that the performance started out at around 815 MB/s and them improved up to over 832 MB/s after a short time. After about 7 seconds the performance went from ~800 MB/s down to around 400 MB/s, so this is the point at when the WD Black PCIe SSDs small SLC cache filled up and the data began being written directly to the TLC NAND Flash. Looking at our data it appears that WD went with a 5.5-6GB cache on this particular model When you average the test results over the 45 second period the average speed is 465.64MB/s.

Not bad performance and the WD Black PCIe 512GB SSD finishes just ahead of the Intel 600p that is it priced slightly higher than. 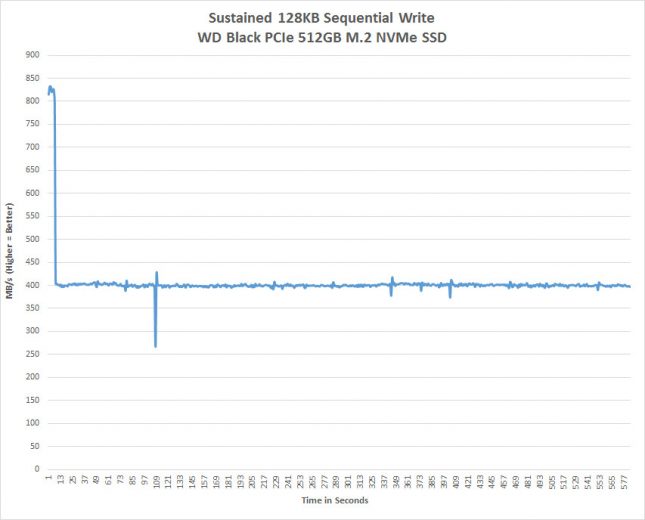 A quick look at the drives temperatures showed that we were hitting just 44C and that was with a 120mm case fan sitting directly over the WD Black PCIe 512GB M.2 NVMe drive blowing cool air over it. Before we started the sustained write test we were bouncing around 26-27C on the drive at idle. We set the polling rate to 30 seconds for this test and you can see how the drive heats up in this test below.

We are pretty impressed with the thermal performance on the WD Black PCIe SSD and this single-sided M.2 PCIe NVMe drive looks like it will work well in laptops and mobile designs in addition to desktops.