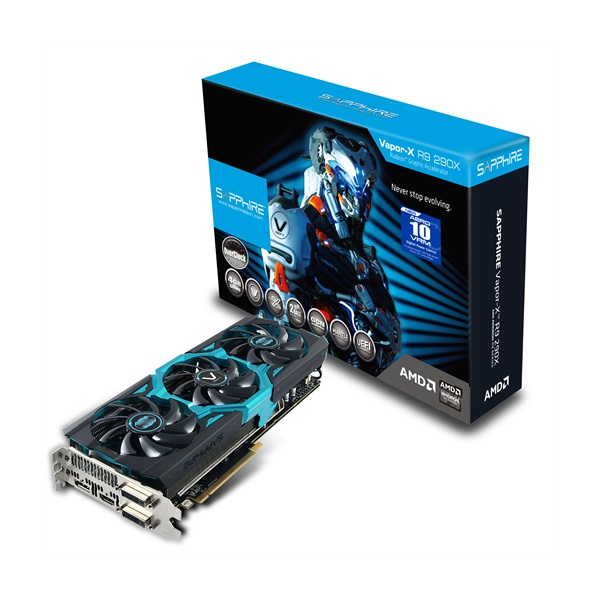 The Sapphire R9 290X Vapor-X OC 4GB graphics card is a very balanced graphics card. The designers of this card beefed up pretty much every aspect of this card and came up with a  card that looks great, is powerful and very quiet. When looking for a Radeon R9 290X graphics card to purchase you’ll want to pay close attention to the cards VRM temperatures and they were excellent on the R9 290X Vapor-X. The combination of the Vapor-X base plate and and Tri-X heatsink and fan structure did the trick!

When it comes to overall peformance the Sapphire R9 290X Vapor-X OC performed well on our 4K Ultra HD monitor at 3840×2160 and should run like a champ at 2560×1440, 1920×1080 or on most any AMD Eyefinity setups. The AMD Hawaii GPU with GCN is a very powerful GPU and will do great when put to the task of gaming or mining litecoins. The overclocking performance of the Sapphire R9 290X Vapor-X OC was decent, but nothing to write home about. We were able to get the core up to 1140MHz and anything over that we were starting to get artifacts. This card is a loaner card from Sapphire and the box was opened when we received it, so we aren’t sure how much punishment it was given by someone prior to its arrival in our labs. There is certainly some headroom available for those that want to overclock further though.

Sapphire’s Radeon R9 290X Vapor-X OC 4GB graphics card is sold under part number 100361VXSR for $629.99 shipped with a 2-year warranty. This puts the 290X Vapor-X right in the middle when it comes to pricing, but it offers some of the highest core and memory clock speeds that are available today. If you are looking for an AMD Radeon R9 290X graphics card that is balanced and doesn’t have any glaring issues, the Sapphire Radeon R9 290X should be on the top of the short list of models that you are looking at.