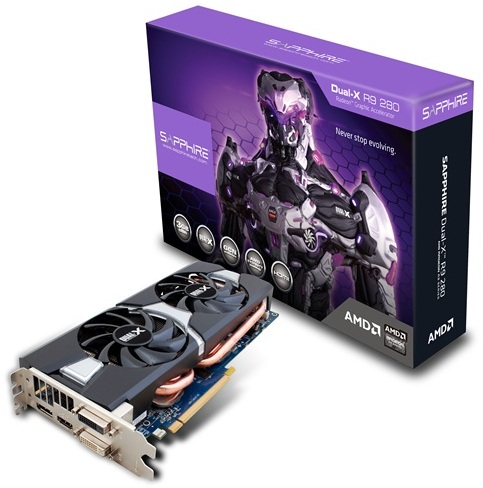 Sapphire provides a small factory overclock on the Dual-X R9 280, taking the reference design from 827Mhz (933Mhz boost) to 850Mhz (940Mhz boost).  Which should provide a small boost to performance compared to other 280 cards based on the reference design.  Overclocking isn’t limited to the factory overclock, we were able to successfully take the Sapphire Dual-X R9 280 up to 1075Mhz without any issues.  The fun stopped there, at 1100Mhz the card totally crashed and has now gone to the video card graveyard.

Sapphire has integrated their Dual-X cooling solution on the R9 280.  It is similar to the Tri-X cooling system used on their higher end cards.  Multiple heatpipes are used to wisk the heat away from the GPU which are then cooled by two fans.  In our testing, the Dual-X cooling solution was able to obtain a 33C temperature when the test system was sitting idle, which increased to 63C when the card was under a heavy load.  The fans do a decent job at cooling, however that comes at a price, the two fans are a little noisy and could be heard once they reached 50% speed.  Keeping in mind that is from 12 inches from the side of the case with the side panel removed.

It is widely known that the R9 280 is based on the R7950, and the some of the benchmarks showed little difference between the two GPUs.  Some benchmarks (such as Battlefield 4 and Batman: Arkham Origins) show the improvements that were made to the R9 280.  The R7950’s were rather expensive at the time, where the price on the R9 280 is much lower, to where a mainstream user might consider the card.  Heavy gamers and those wanting the best performance would be better suited looking at the R9 290 cards such as the Sapphire Vapor-X R9 290 OC.

The Sapphire Dual-X R9 280 Overclocked edition is available under part number 11230-00-40G and can be found online for $245.99 shipped which includes Sapphires 2 year warranty, which is about average for the lower end of the price scale for this series.  At that price it is meant for mainstream users and casual gamers, but provides the performance of the previous generations enthusiast level card, 7950.  If you are running an older video card it might be time to take a look at a new card that should run the latest games with ease at 1920×1080.  The Dual-X cooling system keeps the card cool enough so overheating and throttling shouldn’t be a concern.

Legit Bottom Line:  For mainstream users the Sapphire Dual-X R9 280 is a great choice for those that want to play the latest games at a decent graphics level and resolution.  Be careful of overclocking as our review sample went from running smoothly to becoming a brick after pushing the overclocking a bit too far