The Intel Z370 platform that we used to test the storage drives was based around the ASUS ROG STRIX Z370-F Gaming motherboard with BIOS 0614 that came out on February 2nd, 2018. We used Intel Chipset Driver v10.1.1.45, Intel Management Engine Interface v11.7.0.1045 and Intel RST v15.9.0.1015 drivers. This is important to point out as they include some of the fixes for Meltdown and Spectre design flaws that have recently rocked the PC Market. The Corsair Vengeance LPX DDR4 16GB 3200MHz memory kit was run with CL15 memory timings and a Samsung SSD 850 PRO 512GB SATA SSD was used as the primary drive.

The readout on CrystalDiskInfo 7.6.0 shows that the Samsung SSD 970 PRO series supports S.M.A.R.T. and the NVM Express 1.3 standard. The drive we received had firmware version 1B2QEXP7 installed and that is the version that we used for general testing and benchmarking. We should note that all reviewers were sent pre-production samples of the 970 PRO and were told that Samsung reserves the right to make changes to products, information and specifications prior to its retail release. The retail release of the Samsung SSD 970 PRO series is on May 7th, 2018. 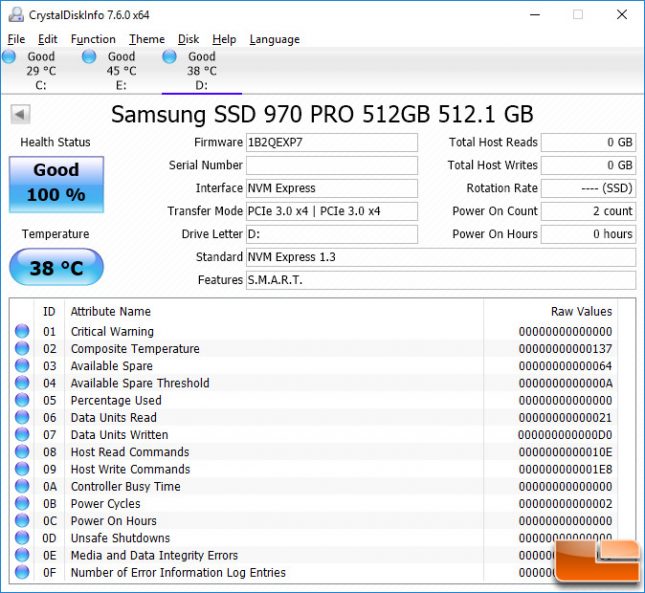 The overall capacity shows up as 476GB on the Samsung SSD 970 PRO 512GB drive in Windows 10 version 1709. Please remember that 1GB = 1,000,000,000 bytes. A certain portion of capacity may be used for system file and maintenance use, thus the actual available capacity may differ from the labeled total capacity. 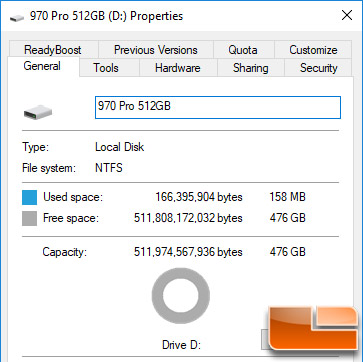 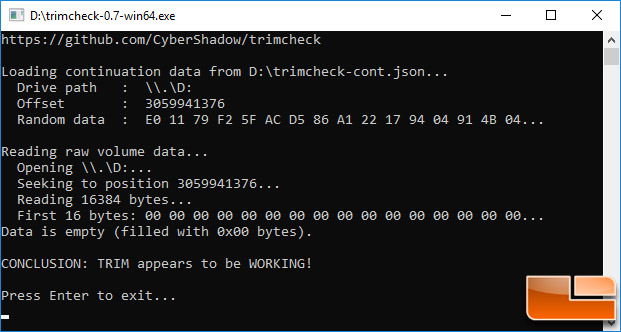 According to TRIMCheck v0.7, the Samsung SSD 970 PRO drive that we are testing today does properly execute the TRIM command correctly as the random data that was written to the drive was properly cleaned.