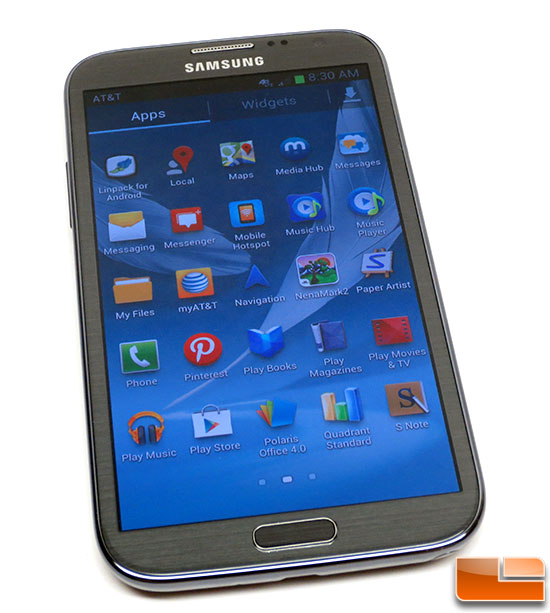 The Samsung Galaxy Note II looks very familiar as it basically looks like a larger Samsung Galaxy S III smartphone. With physical dimensions of 151.1 mm x 80.5 mm x 9.4 mm the Note II is rather large, but still manages to fit in your pocket. This is one of those devices that you need to go into a local phone carrier retail location and physically pick it up and use to see if you’ll like it. If you have small hands or short fingers this might not be the right phone for you!

Let’s take a look around the Smartphone and show you some of the features. 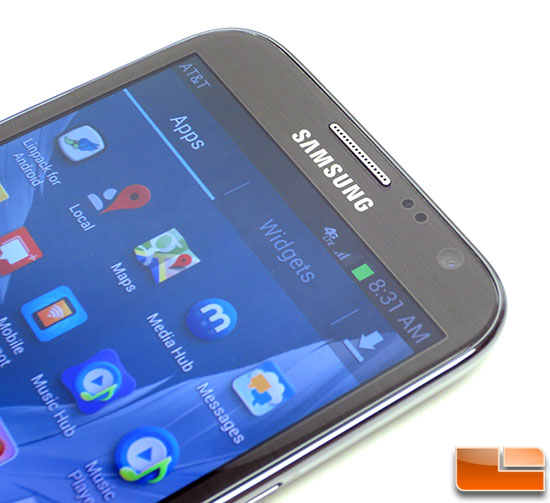 Along the top edge of the Samsung Galaxy Note II we have a hidden LED notification light on the left side, the earpiece, light & proximity sensors, and then the 1.9-megapixel front facing camera. The front facing camera shoots video at [email protected] You can use this camera for video calls and vanity shots. Lately, we’ve been seeing many using a mirror app to fix makeup or their hair with this camera.

The Galaxy S III has a physical home button located smack dab in the middle along the bottom edge of the Smartphone.  On each side of the home button are the capacitive menu and back keys, which have a soft white glow during use. The home button also
activates the S Voice app by double tapping it, and it also activates
the multi-tasking menu by executing a long press. By pressing and holding the home button and the power button at the same time you can take a screen shot.

Speaking of the power button, it is located on the ride side of the smartphone.

On the left side of the phone you have the volume rocker and that is it.  The only three physical buttons on this phone are the power, volume and the Android home button! 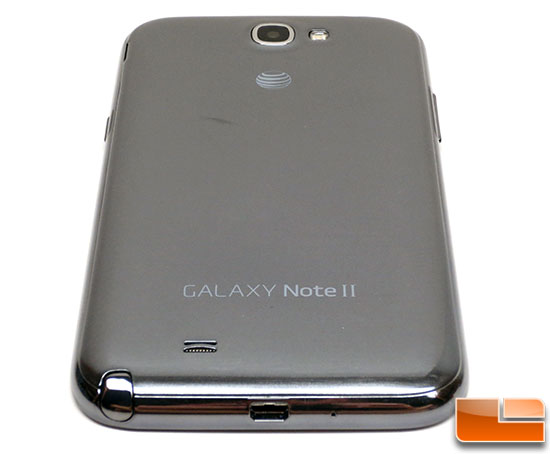 Along the bottom edge of the Galaxy Note II you’ll fine the tiny hole for the microphone, microUSB charging and data transfer port, S-Pen slot and the speaker. 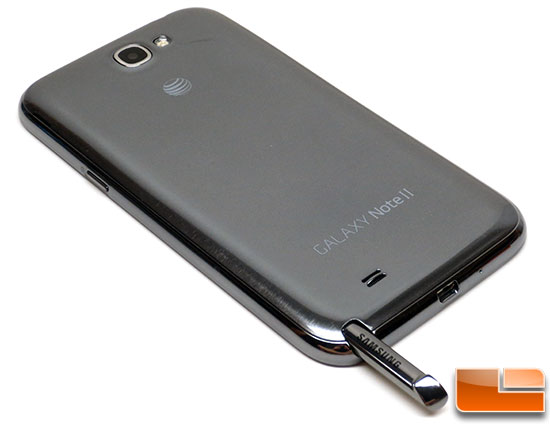 To remove the S Pen (stylus) you just pull it out and start using it.  The Note II detects when you pull the stylus out and launches the S Pen page for you to start working. 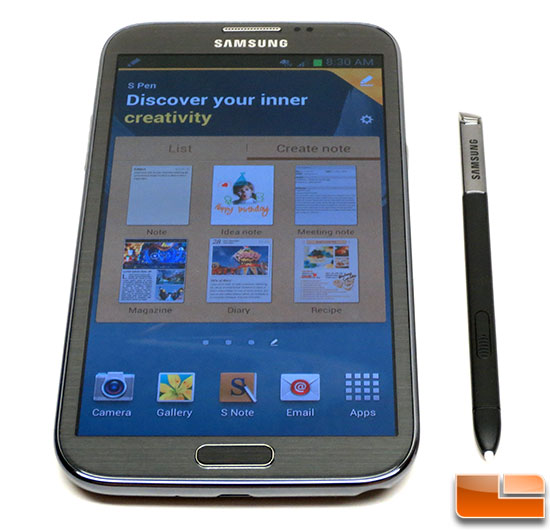 Here is a look at the S Pen and the page that comes up on the screen when the stylus is removed. As you can see it contains shortcuts to various S Note templates. This is a nice feature and saves you from having to search for something to launch. The headphone port also works like this, so when you plug in a pair of headphones it detects them and launches the multimedia player. Having a smartphone that anticipates your next move is very nice and something you get used to quickly. 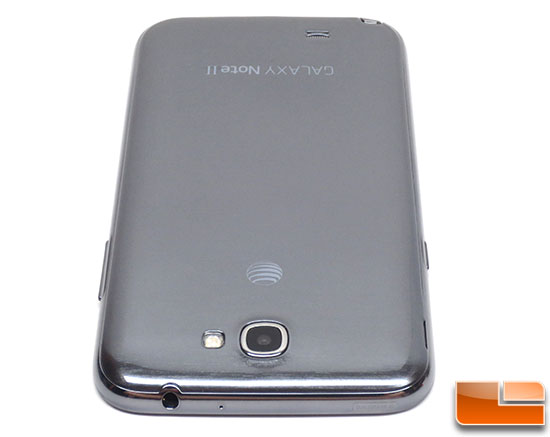 Along the top edge you’ll find a 3.5mm headset jack if you would like to use a wired headset to listen to music. The Samsung Galaxy Note II also features Bluetooth 4.0, so you can easily connect wireless bluetooth devices as well. Speaking of wireless technologies, this phone supports Wi-Fi 802.11 a/b/g/n, GPS, Wi-Fi Direct, Bluetooth 4.0 LE (Low-Energy), TV output, AllShare Case along with Near-Field Communication (NFC). NFC is a emerging technology that is starting to take off thanks to Google Wallet, Samsung TecTiles and more.

The back of the phone has a rear facing 8-megapixel auto-focus camera that’s able to shoot 1080p videos. The default resolution for the images are 3264×2448 pixels and the HD videos are shot at [email protected] You can simultaneously shoot HD video and record images. This camera has 4x digital zoom and has a decent LED flash as well. The back plastic has a high gloss finish on it that resembles brushed metal again. It looks pretty good, but we have learned that the gray finish shows more finger smudges than the white version. 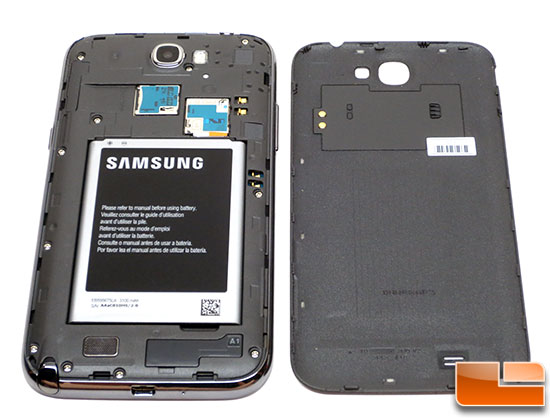 Removing the back plastic cover is simple and once removed you can see the Li-ion 3,100 mAh battery, microSIM slot, and microSD card slot. The Note II has expandable memory, so you can install up to a 64GB microSD card  for additional storage space.  The Near-Field Communication (NFC) hardware is embedded into the handset’s back cover, which is rather odd and why the batter cover has two copper posts on it. If you like to buy larger aftermarket batteries that comes with a new cover you’ll lose the NFC functionality as it is sonic welded to the cover. 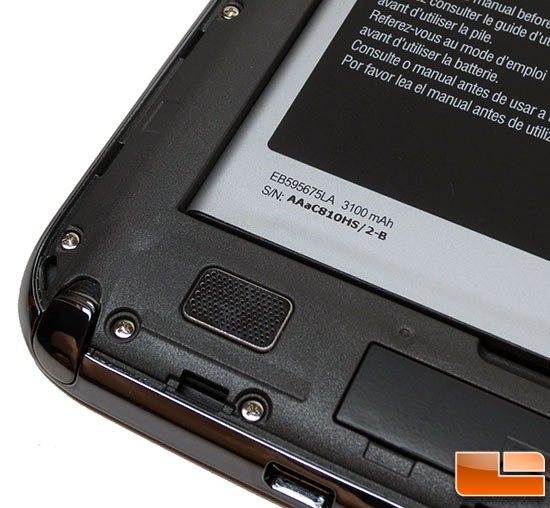 Here is a closer look at the 3100 mAh 3.8V Li-ion battery that is rated at 11.78 Wh. AT&T rates the Note II as having 15 hours of talk time and a standby time of up to 12.5 days. Notice the speaker just below the battery. It doesn’t look like much, but this speaker was found to be quite good, even at full volume. When playing music we found it to be offer crisp sound and did not have the distortion that you’d expect with the volume all the way up!

The build quality of the Samsung Galaxy Note II appeared good with no glaring defects or issues. When you hold the Note II in your hand it feels nice with good weight balance. Now that we have taken a tour of the Note II we can run some benchmarks to see how it performs!