Are you looking for a low cost entry-level M.2 PCIe NVMe drive and don’t need a ton of storage capacity? The Patriot Scorch Series of M.2 PCIe NVMe drives might be what you are looking for. Patriot Scorch drives are rather affordable as you can pick up the smallest 128GB model for $49.99 or for those that are needing a little more storage space the 256GB model can be purchased for $84.99 shipped. Patriot has a Scorch 512GB coming to market soon, but for right now there are just the 128GB and 256GB drives on the market.

A good number of SSD brands no longer offer 128GB drives, so Patriot is able to target a small niche of the market that is looking for the lowest priced drives around. You can find SATA III SSDs for less than M.2 PCIe NVMe drives, but PCIe NVMe drives are generally faster and require no power or data cables. That means you can ditch your modular power supplies SATA power cable and improve airflow inside desktop PCs. Many cryptocurrency miners use USB flash drives or the lowest priced drives they can find to hold the OS on their mining rigs, so there is certainly still a market for 128GB and 256GB drives. 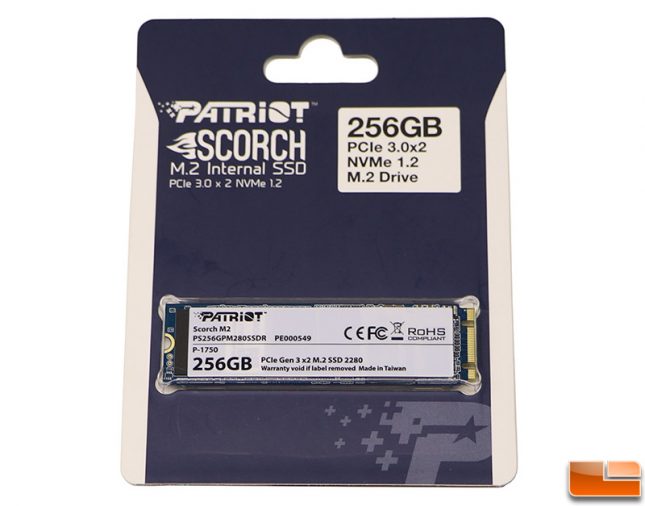 Patriot went with the Phison E8 (PS5008-E8) controller with Toshiba 64-Layer BiCS3 3D TLC NAND Flash memory for the Scorch series. This is a low-cost PCIe 3.0 x 2 controller that supports the NVMe 1.2 standard. Patriot does not list an endurance rating for this drive in TBW, but does back it with a 3-year warranty. This drive is about as basic as it gets as nothing comes in the box and there is no software toolkit to install or custom NVMe driver for the OS. Heck, there aren’t even instructions or anything included in the packaging. You get the M.2 drive and hopefully know how to install it into the system and initialize the disk in Windows.

After asking Patriot for endurance ratings and power numbers we were promptly given them and it looks like this model has 75 TBW (Terabytes Written) for every 128GB of storage capacity. This is on par with endurance ratings on other brands Phison E8 controlled drives.

The Patriot Scorch looks pretty much like any other M.2 2280 ‘gumstick’ drive. You have the common blue PCB with a sticker covering all the major components. Under the label there the four Toshiba 64-Layer TLC NAND chips, one Nanya DDR3L cache chip and the Phison E8 controller.

On the back of the this single-sided M.2 2280 drive we find nothing as one might expect when it comes to components, but there is the warranty label that has the drives serial number on it.