Buying a low-cost SSD can be tricky as there are a number of entry-level NVMe drives on the market with now using a variety of controllers and NAND Flash. Patriot launched their P300 series of SSDs this month in capacities ranging from 128 GB all the way to 2 TB. Performance on these M.2 2280 PCIe Gen 3 x4 drives is said to be up to 2,100 MB/s sequential read and 1,650 MB/s sequential write speed with Random 4K performance rated at up to 290,000 IOPS read and 260,000 IOPS write.

These aren’t bad performance numbers, but what really got our attention is that there are two versions of this drive on the market. The US market gets a Patriot P300 with the Phison E13T controller and the rest of the world gets a Patriot P300 with a SMI 2263XT controller. Patriot is not disclosing the NAND Flash used by either model, but it will likely be 3D TLC NAND Flash by Micron or KIOXIA.

The differing models will be differentiated by part number and PCB color. P300 series drives released in the United States will feature a blue PCB and the other regions will have a black PCB.

Patriot claims that both models will deliver similar performance characteristics and the endurance rating is exactly the same between the models. We took a closer look at the performance specifications and this appears to be true.

The power and performance numbers depends on the model that you are looking at, so please reference the specifications below for the specifics on the US models. 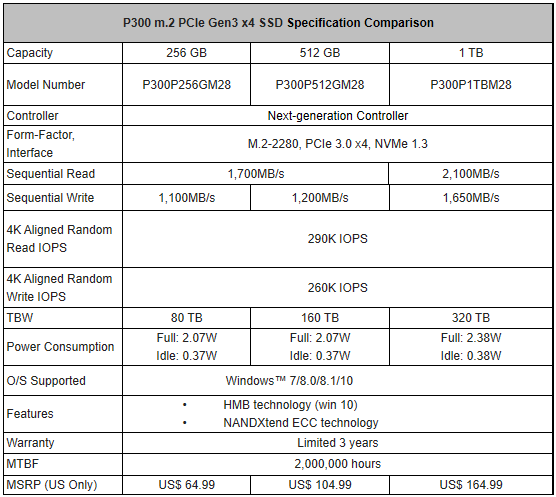 The Phison PS5013-E13T 4-channel, 4-lane DRAMless controller is usually paired with KIOXIA BiCS3/BiCS4 TLC NAND Flash. While this drive lacks dedicated DRAM, it does support the Host Memory Buffer (HMB) technology that is utilized in Windows 10. Microsoft added HMB into its NVMe driver with the Fall Creators Update (or version 1709) of Windows 10.

One thing that many might overlook in this chart is the Terabytes Written (TBW) endurance rating at the very bottom. TBW measures how many cumulative writes a drive can reasonably expect to complete over its lifespan before needing replacement.

The Patriot P300 series is backed by a 3-year warranty with pretty minimal endurance ratings compared to competing drives. The 1TB capacity has a 320TBW rating and that comes out to being about roughly 0.29 TB or 290 GB of drive writes per day over the course of the three year warranty period. While that is lower than many other NVMe drives in this class, it shouldn’t make you concerned as many drives will exceed this rating.

The Patriot P300 M.2 PCIe Gen 3 x4 series drive that we’ll be reviewing today is the 1TB model that is sold under part number P300P1TBM28US. This drive can be purchased from Amazon for $119.99 shipped, which comes out to be around $0.12 per GB. That makes this one of the lowest priced 1TB NVMe drives on the market when this was written. The P300 series comes on simple hang card packaging with what feels like some misleading performance information on the bottom of the card. The packaging says this is a high performance drive and has 7 of 9 plus signs filled in. What exactly does this even mean? Patriots product page called this the next generation of mid-tier PCIe gen 3×4 NVMe SSD to hit the market, offering 25% higher transfer speeds and IOPs than standard PCIe 3×2 solution. Maybe the phrase mainstream performance with closer to half of the plus signs filled in would have been a better fit.

Patriot uses the standard M.2 2280 ‘gum stick’ form factor and the 1TB model is a single-sided drive. Like most other Phison reference designs, we see a blue PCB that is covered by a label that shows the model number, capacity and the usual markings.

Nothing of importance is located on the back of the Patriot P300. We peeled back the label to reveal the Phison PS5013-E13T controller and one of the four TLC NAND Flash packages. There is no branding on the package, but we reached out to our sources at Phison and KIOXIA and confirmed these are KIOXIA BiCS4 96-layer TLC NAND Flash. 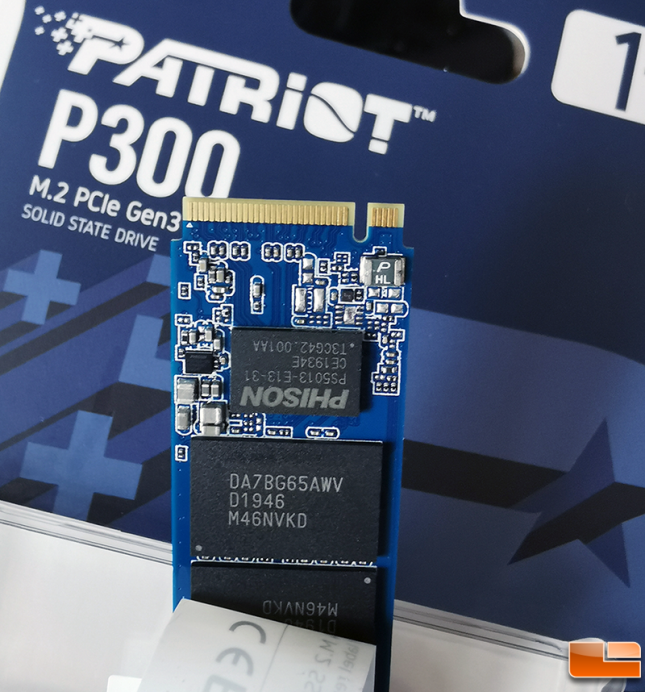 Here is a quick blurb about the Phison E13T controller from the manufacturer along with a promotional video.