When the NVIDIA GeForce GTX 1050 Ti came out earlier this week we didn’t have enough time to properly overclock it, but we were impressed by the performance that the stock card had for $140 price point. The MSI GeForce GTX 1050 Ti 4G OC graphics card ($139.99) showed that it could easily beat the XFX Radeon RX 460 4GB that also just happens to be priced at $139.99 shipped and it was usually performing close to the EVGA GeForce GTX 960 Super SuperClocked 4GB that was priced at $239 just one year ago. It made us wonder just how much more could we improve performance if we manually overclocked it? 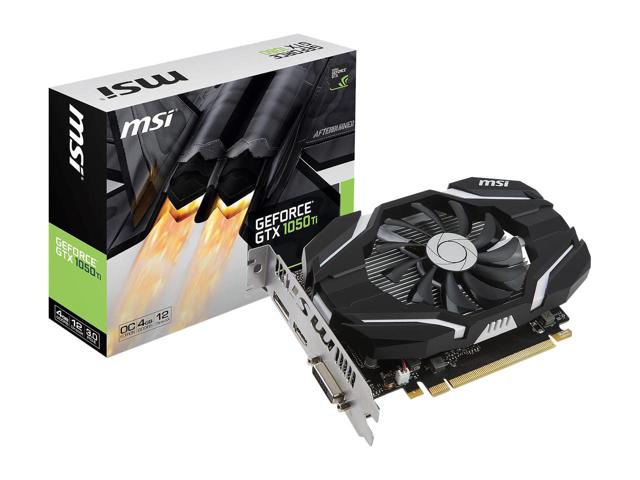 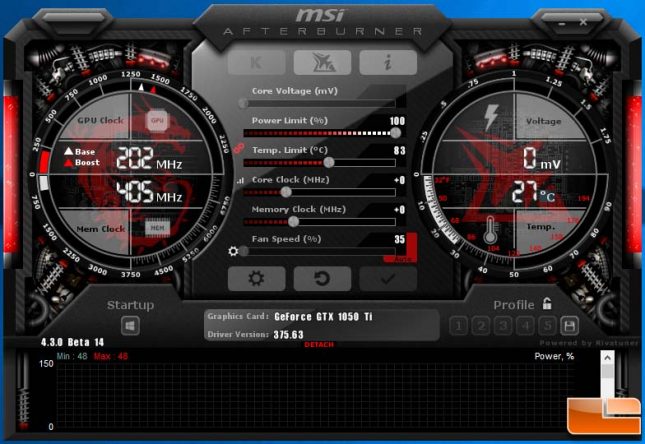 The first thing we noticed in MSI Afterburner 4.3.0 Beta 14 is that the MSI GeForce GTX 1050 Ti 4G OC graphics card unfortunately doesn’t have too many overclocking knobs to turn. For example, there is no core voltage adjustment on this series nor is there the ability to raise the power limit percentage past 100%. NVIDIA says you don’t need any extra voltage to get over 1900MHz on this card and with no external power connectors on the board the voltage controls might have been removed so the card doesn’t use more than 75W of power. The good news is you can manually adjust the core and memory clocks as well as the temperature limit and the fan speed. 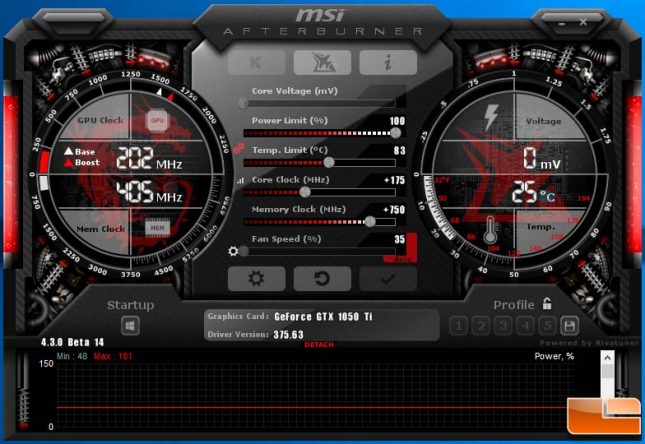 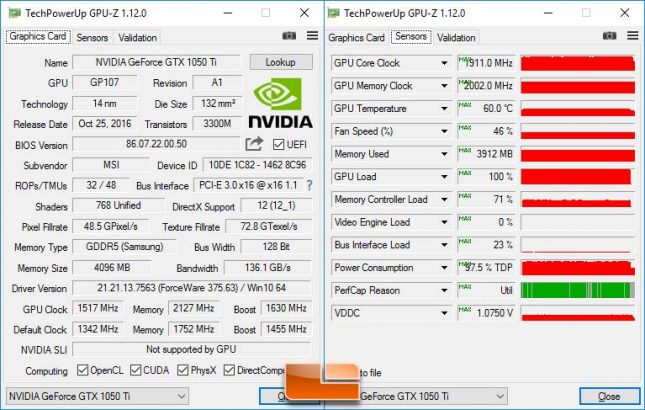 After running some benchmarks and looking at the logs we found that our cards 4GB GDDR5 memory was actually locked at 8008 MHz and that we were unable to get over get over 1911MHz on the core. We asked NVIDIA about overclocking limitations on the GeForce GTX 1050 Ti and were told that they were looking into it. When we asked MSI USA about the overclocking wall that we were hitting they said that there was most likely a limit placed on the card and followed that up by saying most “All NVIDIA cards are usually locked.” Maybe lower-end cards are limited, but we disagree with the statement that most NVIDIA graphics cards are locked. 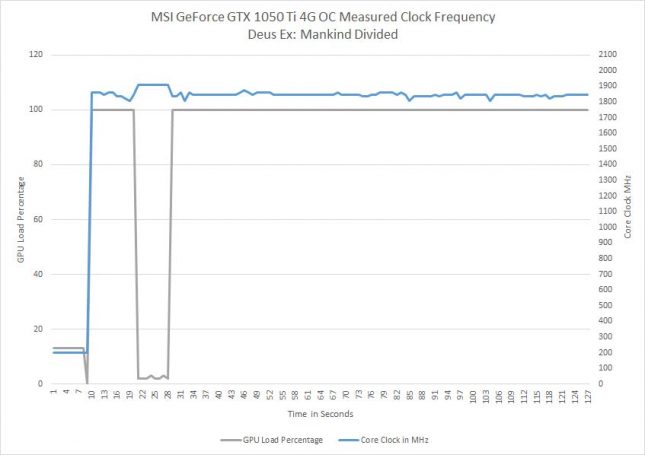 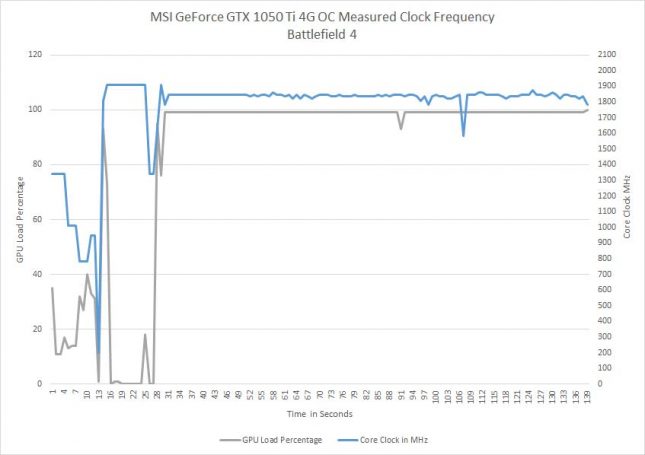 We took a look at our GPU-Z logs that we keep during benchmarking runs and charted a couple of them for you to see. The only time we were hitting over 1900 MHz was while we were in the game menu or loading the maps when when the GPU load wasn’t 100%. The average clock speed in Deus Ex: Mankind divided was 1846 MHz and in Battlefield 4 it was 1837 MHz, both of which are very respectable seeing how the GeForce GTX 1050 Ti has a suggested 1290 MHz base clock on paper. In Battlefield 4 we noticed the clock speed was pegged at just 99% until the very end where it hit 100% load for the first time. GPU-Z showed that the card was power limited while gaming, so the clock speeds vary due to this and are not very consistent. 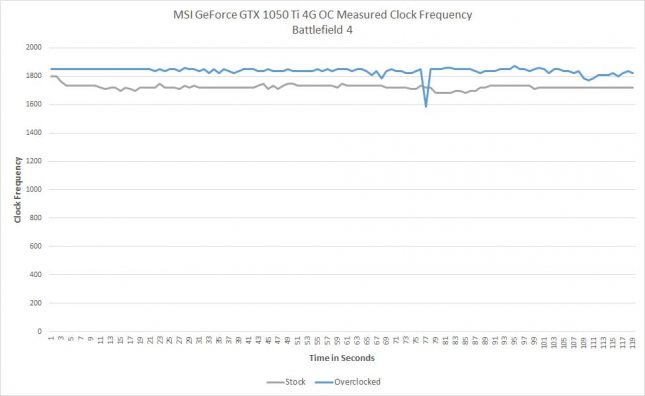 This made us wonder what clock speed consistency looked like on the stock MSI GeForce GTX 1050 Ti 4G OC, so we took a look and found that the clock speeds still varied and weren’t consistent. In the run of BF4 above we averaged 1724 MHz and it eventually flat lined at 1721 MHz at the end of the run. So, our 175 MHz overclock on the core clock helped our average core clock in BF4 go from 1724 MHz to 1837 MHz, which is an increase of 113 MHz. 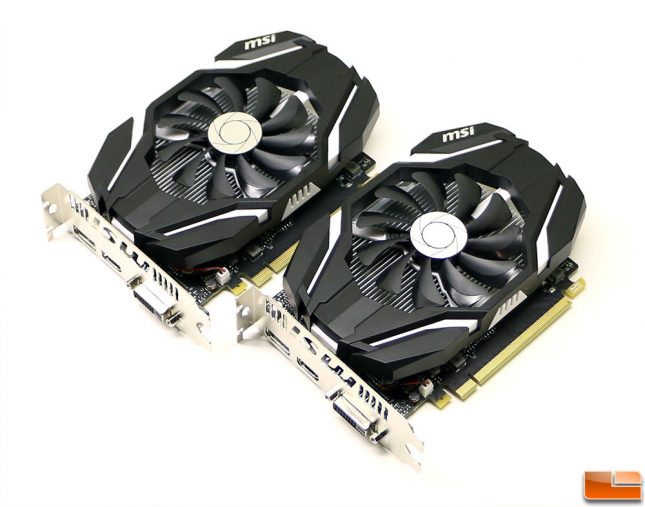