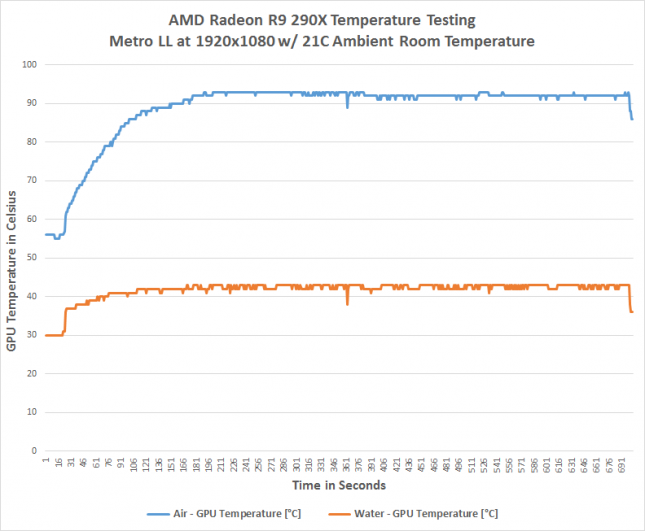 So, does water cooling the AMD Radeon R9 290X help lower GPU temperatures? Does it ever! Over our 12 minutes benchmark run we hit 94C on the GPU with the Sapphire Radeon R9 290X retail card with the AMD reference cooler. With the NZXT Kraken G10 mounting bracket and the NZXT Kraken X40 water cooler mounted up to the card we hit just 44C on the GPU when running with the Extreme preset on the NZXT Kraken software program. This is a 50C degree temperature drop, which is insane and this is a perfect example of how water cooling is superior to traditional air cooling methods. 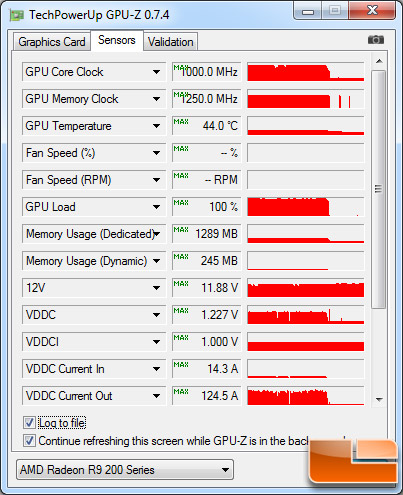 Here is a look at a GPU-Z screen shot we took of the max sensor values after playing Metro: Last Light at 1920×1080 for about half an hour straight. 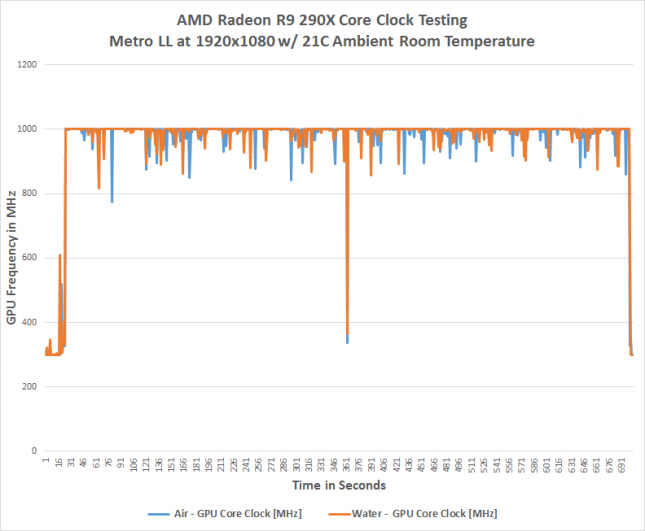 The AMD Radeon R9 290X is fully dynamic when it comes to voltages and core clock speeds thanks to AMD PowerTune 2.0 technology. The AMD Radeon R9 290X is also known to throttle in high-heat situations, so we also wanted to see if water cooling the Radeon R9 290X would help increase the core clock speeds at 1000MHz, which is their peak speed. Our testing found that during the benchmark the Radeon R9 290X with the reference GPU cooler averaged 991.9MHz and with the card water cooled we averaged 992.3MHz. We were expecting to see the clock speed pegged at 1000MHz, but for unknown reasons that is not the case. We thought it might be because the GPU load was not at 100% at all times, but when we charted GPU load versus clock speed (chart) we couldn’t see any direct association with the core clock decreases. 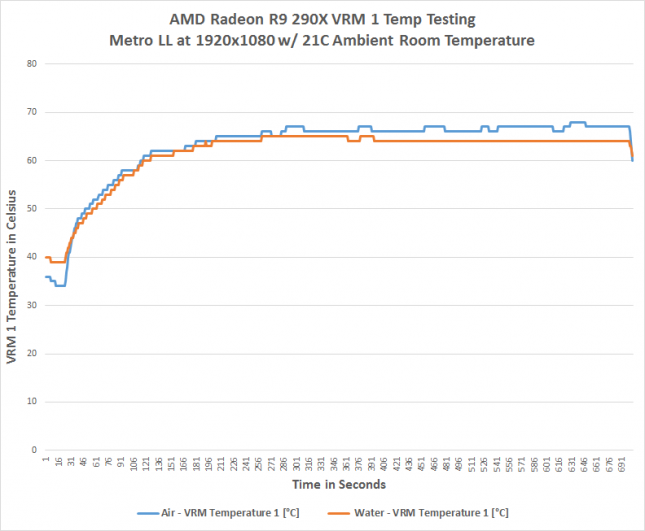 The NZXT Kraken G10 is not a full coverage water block, so that means the GDDR5 memory and the VRM components are no longer dissipating heat to the reference cards heatsink. In the past we have found this to be a major issue as some parts of the card can overheat and actually run hotter than before. The NZXT Kraken G10 helps combat this by having a 92mm fan on the custom designed bracket to help keep the PCB components nice and cool. GPU-Z reads the temperatures of two areas of the VRM. We aren’t sure what two VRM areas GPU-Z is reading though. We asked AMD PR and they thought that VRM1 is most likely VDDC (the 3D core power rail) and VRM1 is most likely VDDCI (the MC power rail). VRM 1 was a bit warmer on water when at idle, but once the GPU was under load it was actually cooler. During the benchmark run the air cooled card averaged 63.9C and the water cooled card averaged 62.2C at VRM 1. 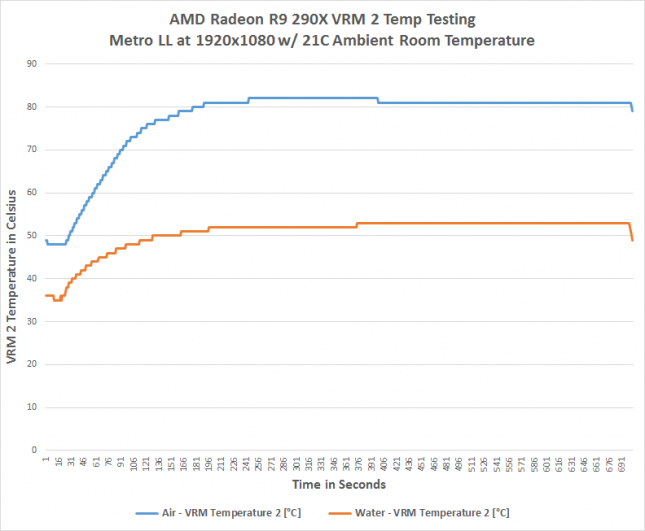 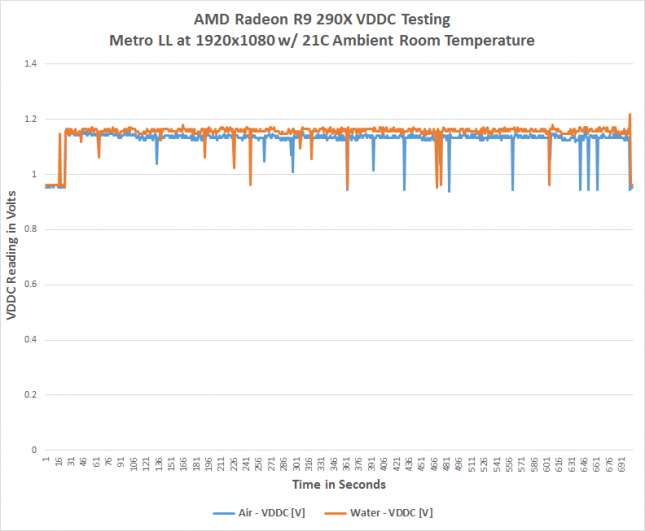 When it comes to GPU voltage it looks like the Radeon R9 290X with the reference cooler used an average of 1.134V during the actual benchmark run whereas the watercooled card used 1.156V. When at an idle power state the Radeon R9 290X with the AMD reference GPU cooler averaged 0.953V versus 0.961V with the water cooler attached. Why would the cards voltage increase when water cooled? AMD informed us that with the new Powertune that clock and voltage are now defined by a relationship. So if the GPU is spending more time at higher clocks in a given situation, the associated averaged voltage will be higher. I.e. the GPU will tend to ride the clock/voltage relationship higher It is no longer true that only clocks that are affected. Like most modern VRM designs, it looks like load line is in effect here. So the heavier the current draw demands, the lower the voltage will droop relative to the set point. If you are cooling the GPUs extremely well like we are here, the power consumption will be lower and current draw will be less. Hence the voltage will not droop as much (vs Vset) when the GPU is kept this cold. 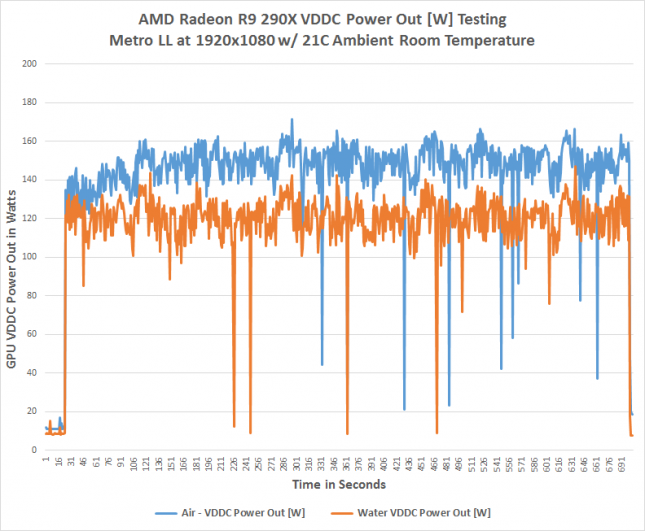 The largest shock when testing the AMD Radeon R9 290X was the VDDC power output reading of the card in Watts. This is basically the calculation of GPU-Z 0.7.4 that shows the power output of the entire card in Watts. This also can be understood as how much power the card is using. Legit Reviews spoke with W1zzard over at TPU about this data value and he said this is a reading provided directly by the voltage controller and that it likely is the result of multiplying the measured voltage with the measured current of the card. The Sapphire Radeon R9 290X with the stock cooler averaged 146 Watts with a peak of 171.5 Watts. The same card with the water cooler averaged just 120 Watts with a peak of 147 Watts. The fact that GPU-Z was using 26W less power with water cooling was astounding.We showed these results to AMD and they said that at lower temperatures that there will be less leakage across insulators inside the GPU. When talking about a temperature drop of 94C to 84C that difference is usually negligible, but since we had a 50C temperature drop that could be part of the reason we are seeing huge power savings.

One would think that with the additional circuit board, water pump and cooling fan that the power consumption would increase… Oh wait, we unplugged the reference cards blower fan and the new water cooler is plugged directly into the motherboard. It looks like we’ll have to look at the systems overall power consumption at the wall to see if there really is a power savings to be had.