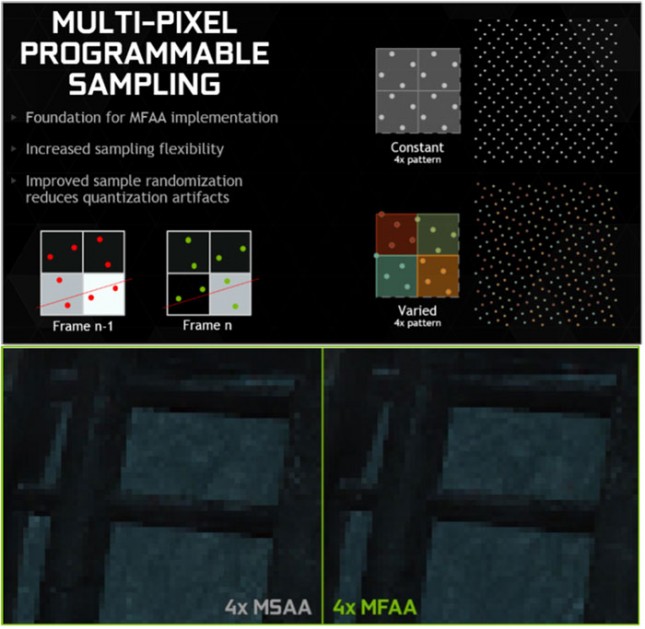 NVIDIA today released GeForce Game Ready Driver 344.75 WHQL drivers and with the driver comes support for Multi-Frame Sampled Anti-Aliasing (MFAA). MFAA is an implementation of Anti-Aliasing (AA) that NVIDIA hopes will replace MSAA in the years to come. MSAA is one of the oldest and most popular forms of AA. MSAA removes jagged edges that increases graphic quality, however it does cause a decrease in system performance. NVIDIA thought that this is something that could be improved and came up with a new solution on the new Maxwell GPU series. That means MFAA requires GeForce GTX 980 and 970 ‘Maxwell’ GPU powered desktop cards or GeForce GTX 980M and 970M mobile GPU’s to run as the new AA technology needs the latest hardware to run on.

“Previous-generation GPUs include fixed sample patterns for anti-aliasing (AA) that are stored in Read Only Memory (ROM). When gamers selected 2x or 4x MSAA for example, fixed sample patterns were used. With Maxwell, we have introduced programmable sample positions for rasterization that are stored on Random Access Memory (RAM), creating opportunities for new, more flexible, more inventive AA techniques that uniquely address the challenges of modern game engines, such as the increased performance cost of high-quality anti-aliasing. Maxwell’s new RAM-based sample position technology can still be programmed with standard MSAA and TXAA patterns, but now the driver or application may also load the RAM with custom positions that are free to vary from frame to frame, or even within a frame.” – NVIDIA

NVIDIA says that MFAA is able to render graphics of 4x MFAA quality with a performance hit equal to that of running 2x MSAA while having the image quality equal to that of 4x MSAA. So, MFAA is said to deliver a 30% performance boost while maintaining smooth, high-quality edges by alternating sample calculations across each frame and each pixel. This means that users can increase the graphics quality without reducing their frame rate. Confused? Here is a great video where Tom Petersen from NVIDIA goes over MFAA and how NVIDIA is alternating AA sample patterns both temporally and spatially to give you the performance you want when gaming with the best image quality possible.

Enabling MFAA is extremely simple as it takes a single change in the NVIDIA Control Panel to enable MFAA. Once it has been enabled, any supported game configured with 2x MSAA or greater will automatically use MFAA. Eventually NVIDIA has plans to integrate MFAA into the GeForce Experience and has it as an option in the Optimal Playable Settings profile. 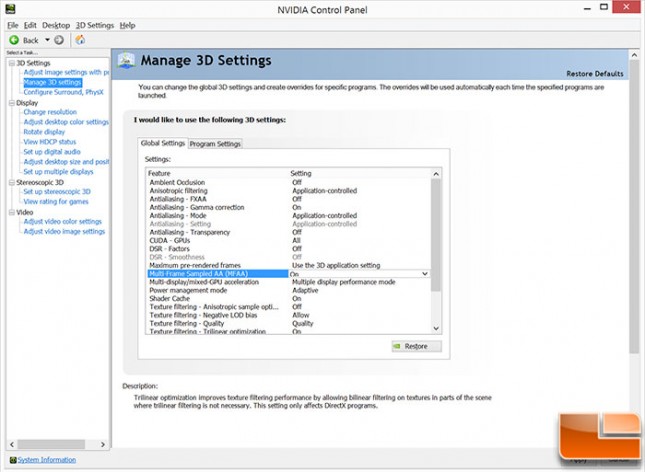 Now that we know a little about MFAA, let’s take a look at some of our performance testing.