We have been anticipating the arrival of the Netgear Nighthawk X6 R8000 router since its announcement in June of this year. What makes this router so unique on paper is that it contains three radio bands, one 2.4 GHz (600 Mbps), and two 5.0 GHz (1300 Mbps), or Triband that can be used simultaneously to achieve 3200 Mbps. These are just theoretical numbers, but they are nevertheless impressive to those who are looking for ultimate wireless coverage even if they have to pay a premium cost for the unit. At a street price of $299.99 shipped, the R8000 wasnt the most expensive router we have tested, that title goes to the nearly $500 Belkin/Linksys WRT1900AC that we reviewed already, but it is one of the largest. The Netgear X6 R8000 is designed to handle a ton of WiFi devices and keep them at their ideal WiFi speeds. Netgears Smart Connect automatically places your attached devices in different 5GHz channels based on the devices Wi-Fi use. If you are , you are able to place devices in whatever band you want, but for the typical user, this parsing (or Load Balancing) is happening in the background keeping network traffic flowing. 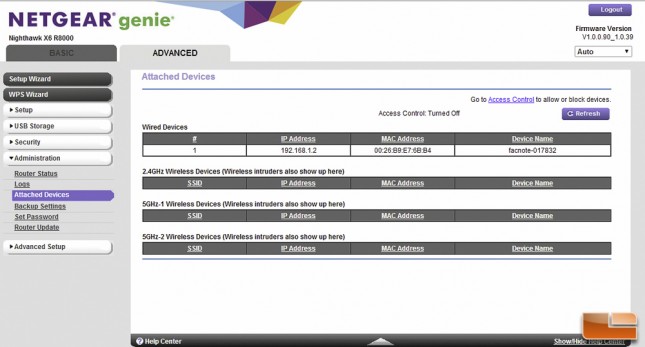 If you have limited desk space for this router, you may want to consider a different model. At roughly 12x9x2 inches in size, the R8000 takes up a ton of space. We replaced our old Netgear R6300, but couldn’t just swap it out because the R8000 took up so much room. We ended up just putting it on top of the Legit Reviews Printer to save desk space. Netgear did provide wall mounting holes at the bottom of the unit, but I would even be careful mounting the 2.5-point router without proper wall anchors. Yes, the unit is big, but it looks very impressive in your office. With the movable antennas, the router looks like a piece of equipment that should be found in a sci-fi movie. Maybe this is why they named it Nighthawk X6. It was very considerate for the Netgear engineers to the design the R8000 with adjustable LED indicators. 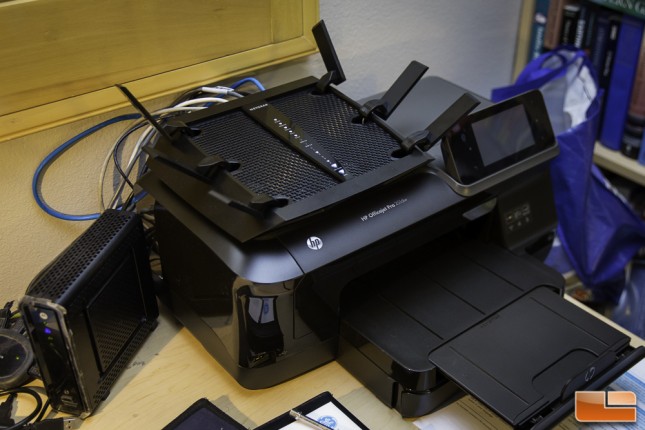 With 13 LEDs, the X6 can really light up an office. While I dont really mind flashing LEDs, I can see how some would quickly get annoyed at all the flashing. Netgear gives you the option of turning off all LEDs except for the Power LED if you want. There is a third option that disables blinking on Internet LED, LAN LED, Wireless LED and USB LED when data traffic is detected as well. 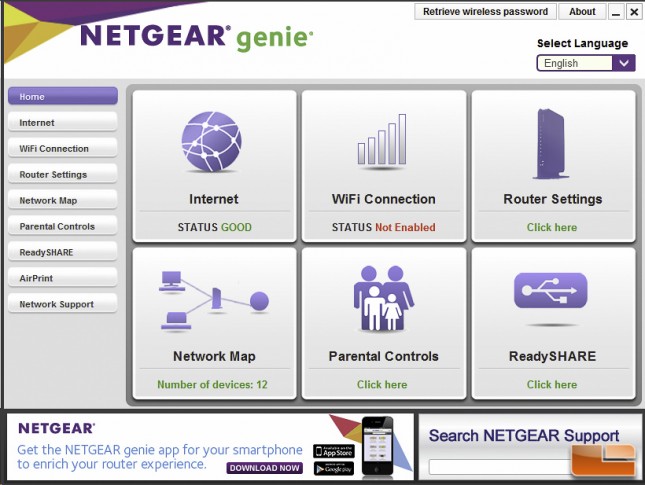 Speaking of options, Netgear has improved their Genie firmware and application. We really do love this GUI as the layout is very organized for the novice and experienced power user. The response of the GUI was quick as well with everything that you could want in options. 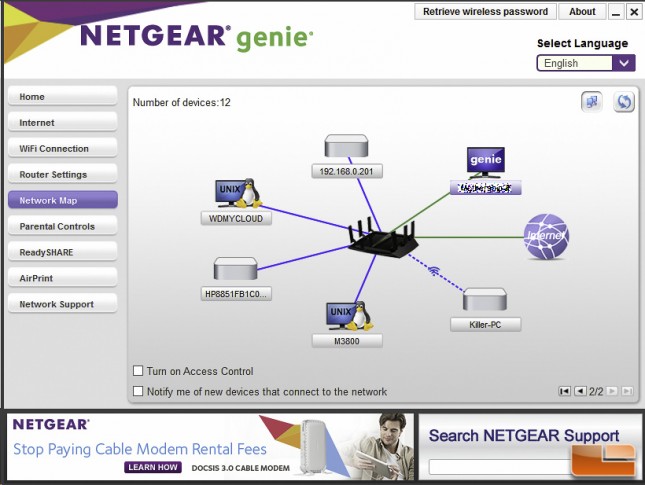 One of the biggest additions to the firmware that we need to point out is the Smart Connect option in the Wireless Settings menu. This option gives the Netgear X6 R8000 the freedom to optimize the speed of each attached device by allocating devices to a particular channel. This automatic Load Balancing allows the R8000 to keep devices working at their optimal speeds. We saw this in the LR bunker where we had a wireless laptop busy bittorrenting and another machine connected wirelessly wanting to play Plants Versus Zombies via Origin on the internet. In the past, we had to turn off the BT machine so that online gameplay would not lag, but with the R8000, the router placed these two machines on different 5 GHz channels and the speed and quality of the band with the gaming PC on it was not hindered by the slow BT machine. It was pretty dramatic, and showed how well the router was doing in our environment. Our attached storage tests really gave a different narrative of the next-generation tri-band R8000. While dominating each speed and network load test we subjected it to, it really fell back to average when looking at using the router as an economic Network Attached Storage hub. The Belkin/Linksys WRT1900AC dominated this test and helped to offset a lot of the criticism we placed on it for doing so poorly with their wireless-AC performance. With its more than 100 MB/s attached storage performance, the Linksys results pushed the limits of our Kingston DataTraveler HyperX USB drive. We expected more out of the most expensive router in our suite and those looking to take advantage of the USB 3.0 port, the WRT1900AC is back in the conversation.

We certainly had high expectations for this new router, and to be honest, the Netgear did not disappoint. The wireless speeds were stellar throughout our testing and the number of options and features makes you not miss open firmware such as DD-WRT. After the initial setup, we used the Netgear Genie As of the date of this publication, DD-WRT has not been released for the R8000, but the open source community has been buzzing about this router and how they will implement custom features for the three radios being used. One idea is to make the R8000 a dual-use access point and extender. Using two of the radios for normal access point duties, while the third acts as a bridge to another wireless device. This is just one of the emerging ideas to come from the open-source community and we cant wait to see what else they will think of. For those looking for the markets best wireless coverage and some of the best features out of the box in a router, the Netgear Nighthawk X6 is now the current market standard. It doesn’t hurt that priced at $299, this is not even the most expensive router in its classcheck that there is no other Tri-Band Wireless-AC router on the market. We must admit, we really didn’t know if the early buzz about this router was all marketing-speak, but when we saw what the router could do in real-life, we quickly became believers. The biggest downside of this router is its sheer size, but if you are creative (or neat) you really should have no major problems placing the device where you want. Netgear ships the Nighthawk X6 R8000 with its standard 1-year Hardware warranty including 24 hour technical support by phone for 90 days from purchase.

Legit Bottom Line: The Netgear Nighthawk X6 R8000 Tri-Band router really does set a new standard in high-performing wireless routers not only giving you an extra radio to play with, but an upgraded firmware that does load balancing to keep your devices running at peak speeds. If you can afford the price tag, this is the router to buy.