When it comes to RGB software suites that control peripherals, if you can’t do an audio visualization mode, you’re falling behind. Razer, SteelSeries and Logitech all now offer audio reactive modes within their RGB software, while Corsair reps tell me that their audio reactive support may be coming later this year. 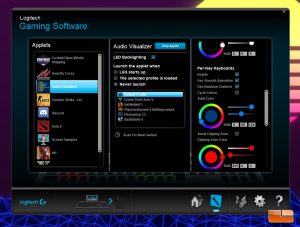 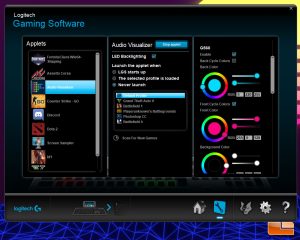 The Audio Visualizer Mode provided by the Logitech Gaming Software allows for in-depth control, with the lighting zones and background colors each able to be set independently, or cycled for a rainbow effect. I settled on a blue and pink theme for my musically reactive mode, as my current lighting mode is set to Miami/vaporware. I fired up The Midnight and found myself immersed in a cloud of synthwave with coordinated lighting that matched my system, pulsating to the beat. Under Audio Visualizer Mode, the rear lighting zones of the G560 RGB react to bass, while the front zones react to mids and highs.

The Audio Visualizer mode is fun to look at and tinker with, but I didn’t use it beyond short spurts, as it was distracting. Logitech really lets users tailor the mode to their needs, with the ability to set specific colors and limit effects to specific components. If I don’t want the mouse and keyboard to react, users can set LGS to do that. If I only want the keyboard to react with an equalizer effect while the speakers and mouse stay neutral, that’s also possible. LightSync as I tested it was still in a beta state and I was using non-publicly available software, but aside from a couple of crashes when trying to load the audio visualizer and screen sampler sections during gameplay, I didn’t have any issues with using the LGS and configuring it so that my lighting settings were exactly as I wanted. 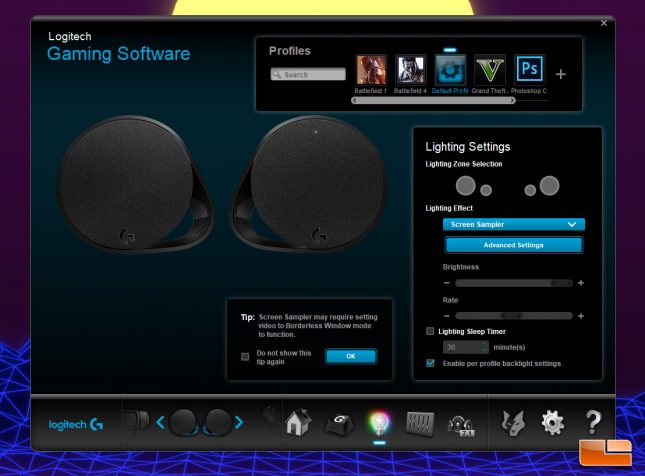 The G560 speakers are able to read data from your PC display and mimic the colors using the RGB zones built into the speaker. Obviously, color mimicking can’t be perfect, as there are only two RGB LED’s on the rear of the G560 and two on front, but basic ambient lighting should be possible. 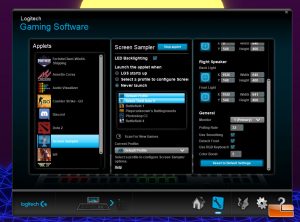 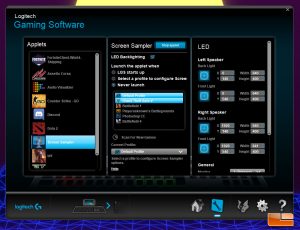 When you get into the advanced section of the Screen Sampler, you can choose whether to include the keyboard in the screen sampler, which will also mimic the colors of selected section of the display on your keyboard, which is pretty neat. The polling rate can be set and it defaults to the lowest possible rate of 32ms. While this may sound like a lot of time when compared to the 1000HZ/1ms mice and 144HZ 1MS monitors out there, it’s actually not bad at all and unless you’re in extremely fast paced scenes where the colors are changing a lot, the animations and colors are able to keep up pretty smoothly. 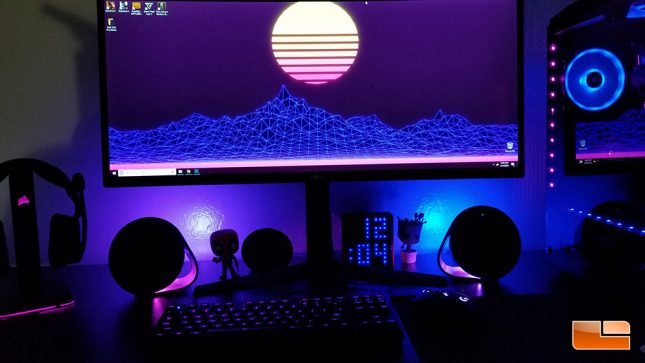 The screen sampler was set to sample the lower middle left and bottom left sections of monitor. You can see that the front RGB zones display the line of pink that runs along the lower portion of my monitor, while the rear display is covering the blue vector mountain displays in the lower center of my display. 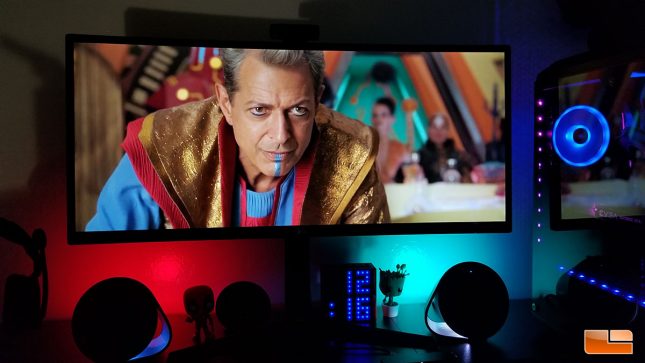 Here, we can see the Logitech Screen Sampler is picking up the red and blue in the suit of the Grandmaster in Thor Ragnarok, with the right speaker picking up the white from the table and the teal door in the background. I found the screen sampler did a pretty good job of ambient effects and they didn’t distract from the movie, even in faster scenes. I am used to using behind-screen LED solutions that sample the video for ambient lighting, like the Dreamscreen. I can say that while the Logitech G560 can’t compete with dedicated solutions like Dreamscreen, when you consider that these speakers only have a few RGB LED’s, the fact it is capable of the effects it is while looking smooth and not distracting is impressive.

Capable of running at up 48,000Hz with a 16-Bit sample rate, the Logitech G560 have an excellent sound stage that surprised me, as I wasn’t expecting this 2.1 speaker set to sound so damn good. I came over from using the $299 Creative Sound Blaster X Katana, which is a soundbar with separate speakers for mids and highs, along with an independent subwoofer. While the Sound Blaster X Katana may have a slight bit more refinement in the high frequency range, the G560 RGB have excellent sound reproduction across all of the frequencies along with excellent mid and low frequency response that is fuller than what is provided by the Katana. Unfortunately, the bass is just a bit heavy on the G560 by default and users who prefer a more neutral sound may find themselves adjusting the EQ to the “Drop The Bass” mode, which sounds great. The subwoofer on the G560 RGB provides tight, punchy bass and is plenty powerful. Turning up the unit all the way to 100% doesn’t lead to any distortion, but I doubt users will want to run at above 50% volume in most cases, as the G560 RGB have the ability to get really loud.

Musically, the 30W satellite speakers G560 sounded great with every track I tried, with the nuances of The Who’s Eminance Front standing out quite nicely. Everything from classical tracks to heavy metal sounded great on the Logitech G560 and the sound is definitely on par or better than most of the other 2.1 sets I’ve tested in this price range, like the Klipsch Promedia 2.1. The G560 may have brought RGB lighting to the party, but Logitech didn’t forget to pack them with a healthy helping of sound quality. 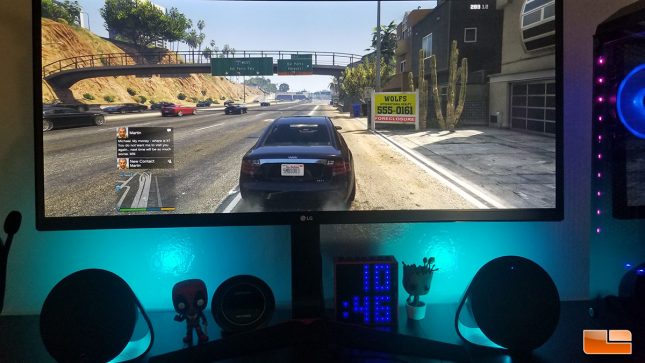 Gaming with the G560 was simply amazing, as the punchy, tight bass paired with the clear, refined sound of the satellites really lead to an immersive experience. I found myself driving around the world in GTA:5 and just jamming to tunes while ignoring any mission objectives, occasionally causing some mayhem to get the police involved so I could see that amazing blue and red light show. Unfortunately, using DTS-X surround sound in pretty much any game was a lackluster experience as it just muddied things up and created an awkward imaging. Logitech could have omitted DTS-X functionality from these speakers, as I only see it as being a downgrade from the excellent stereo sound provided by the G560 in its default mode. Still, I guess it can’t hurt to have it there for end users who do want to tinker and experiment with the setting. Perhaps it sounds good in a game that I don’t own, because none of the titles I tried benefited from DTS-X.

Pairing devices with the Logitech G560 was the easiest pairing process I’ve ever encountered in my life. By pressing the Bluetooth button located on the back of the rear speaker, the G560 right speaker LED will begin to flash to let you know it is in pairing mode. Once this is done, you can use your phone or other Bluetooth device to pair with the G560 speakers, which should be a visible Bluetooth device when you scan. I found audio quality to be excellent over Bluetooth, though not quite on par with the PC connection. Impressively, you can have a Bluetooth device paired while the speakers are still running from a PC, letting you hear if your phone is ringing or if you’ve got a text through your PC speakers in case your phone is in another room.

The 3.5mm input jack located on the subwoofer of the G560 can also be used simultaneously with a PC. Though this jack isn’t easily accessible, I doubt that many people are going to take advantage of this functionality, though some usage cases would warrant it and a 3.5 mm input could technically allow for a lower latency, higher fidelity connection than the Bluetooth could, should you want to run a wire from your phone or other audio output device. I found the audio fidelity over the 3.5 mm input to be excellent and it sounded really good with my Samsung Galaxy S8+ and my high bitrate MP3 files. It’s nice that the Logitech G560 can be used without a PC, though the PC gaming crowd is the clear target audience for these speakers.

Bluetooth and 3.5mm input support is there, along with extensive adjustment of the sound and lighting via Logitech Gaming Software. I had a great time playing games, listening to music and watching movies on the G560.

Let’s wrap up this review and see how the Logitech G560 stack up against similarly priced solutions on the next page.