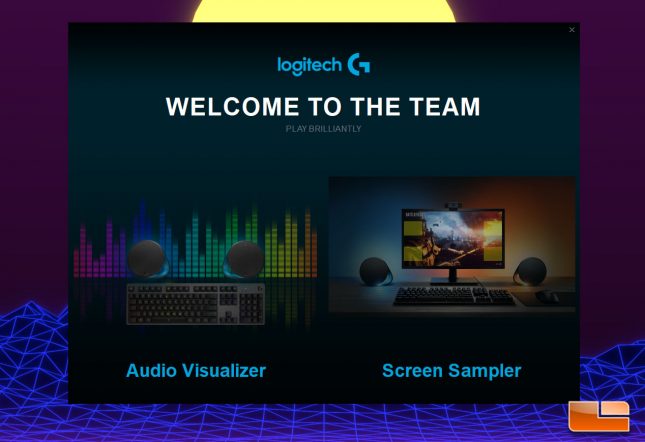 Installation of the beta LGS went without any issue, upgrading the software to the newest version over my previously installed version without any conflicts. After a reboot, the system was live and the speakers were recognized by Logitech Gaming Software, which gave me a Welcome To The Team LightSync introduction screen, with the Audio Visualizer and Screen Sampler settings both being clickable for immediate access. 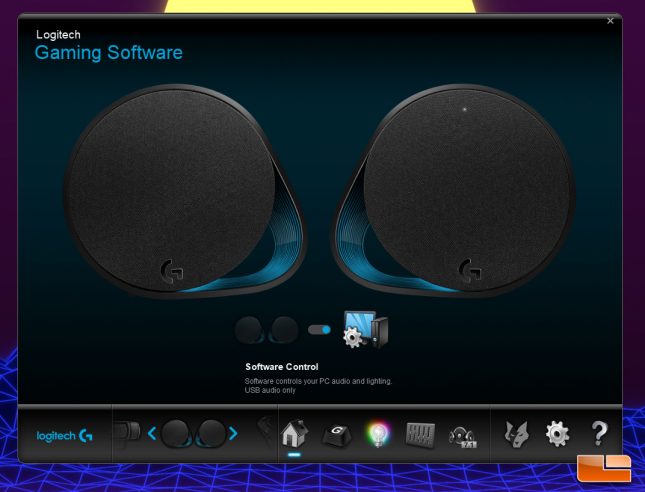 The mains section of LGS for the G560 is pretty basic, with a toggle for software control and control over Bluetooth available. Basically, this toggle disables and enables LGS for the speakers and I don’t see of any reason to turn it off when it is connected to a PC, as you will lose all of the LGS functionality without gaining anything.

The Logitech G560 has a single button on top of the unit that is usually used for cycling LED brightness, but this button can be reprogrammed to do program launching, media key functionality, play recorded macros, type pre-defined text and more. This is certainly a unique bit of functionality that I can appreciate. 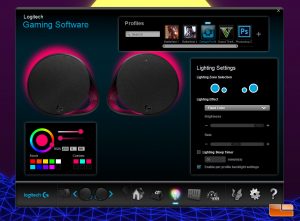 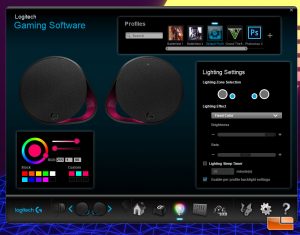 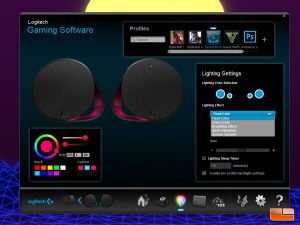 The lighting section of LGS allows for fixed colors, color cycling or breathing modes to be selected, in addition to the Screen Sampler and Audio Visualizer modes brought in by LightSync, which we will look at in just a moment. When in fixed color, color cycle or breathing modes, each of the four RGB zones can be enabled or disabled, but in the current iteration there is no ability to set different colors on each individual zone, you could only enable or disable the zones. The color cycle mode cycles through each color smoothly, even at the slowest rate setting, with no jerky animations or odd transitions making things look bad. The breathing effect slowly fades a single color in and out and also looks good, though at the slowest rate the animation was just a bit jerky when it would fade down to the lowest lighting settings. 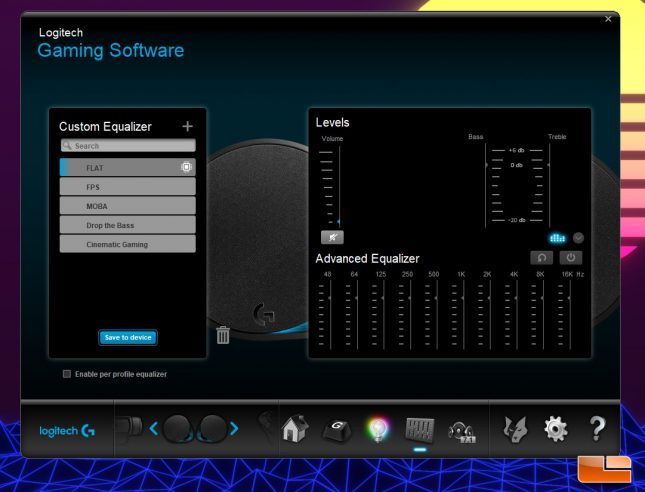 The custom equalizer section of LGS allows for full equalization control, with several presets available. I found that the “Drop the Bass” preset sounded really good and helped bring the slightly heavy default bass level of the unit to a proper level. Advanced equalizer modes can be used, or a simple bass and treble slider can be adjusted for the less inclined. LGS also allows per-profile equalizer settings, so you can set the speakers to run a specific sound signature in your favorite game, or when running Media Player Classic or foobar2000. 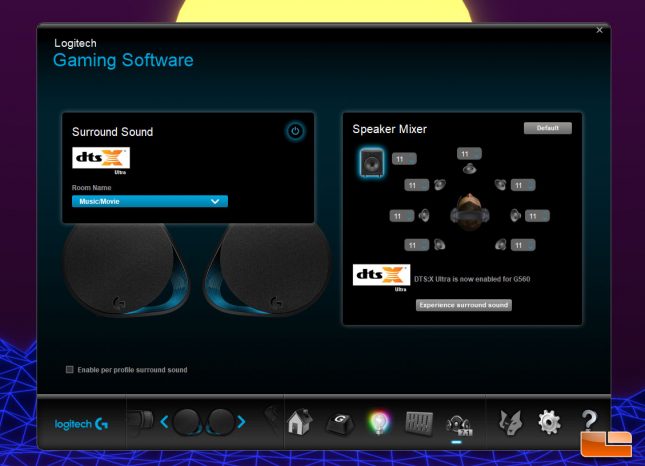 The last graphical column in LGS for the G560 allows users to toggle DTS-X Ultra on and off. I visited this section to take this screenshot and listen to the two modes for testing purposes and now that it has been toggled back to disabled, I doubt I’ll ever visit the DTS-X section of LGS, again.

While any game can be used with the Screen Sampler, which I will show in just a moment, Logitech has API support for LightSync with several games. This means that lighting is controlled via the API through the game to give in-game cues and immersive lighting. It just so happens that I regularly use several of the programs and games support by Logitech LightSync, so I set out to seeing how it worked, with Battlefield 1, Fortnite and GTA: 5 being the first games I tested. 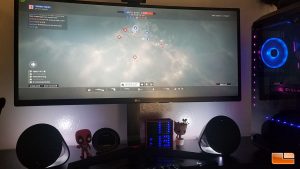 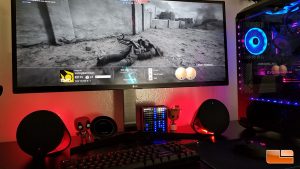 Battlefield 1 displays a clean white background during neutral and loading scenes, giving a nice ambient effect. When you get into the action is when the lighting comes into play. Going into gas will turn your lights green to let you know you’re about to become a puddle of goo. Run into a fire and your lights glow orange and red in a very smooth fashion. Die in Battlefield 1 and the G560 displays the crimson red of your blood until your next respawn. 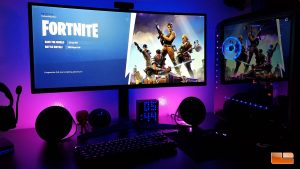 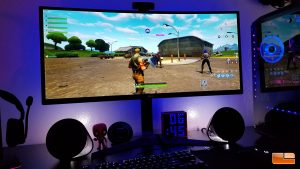 Fortnite, which has gained a lot of popularity in recent weeks, works with the Logitech LightSync API by defaulting to a very clean purple color at the menu screen. When in game, the lighting goes to white unless you’re in a state of being attacked or boosting, at which point the speakers will glow to indicate activity. 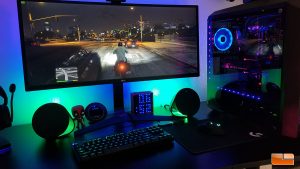 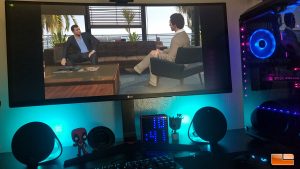 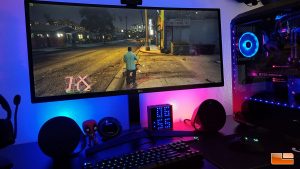 GTA: 5 has some pretty nice visual effects when used with LightSync. When playing as Franklin, the lighting was green, while switching to Michael gave a bluish white background, a really nice touch.

While you’re playing and there aren’t any actions, the RGB lighting stays the character color, but doing certain actions like getting chased by police will cause the lighting on the G560 to animate.

When you do something illegal and the police are alerted, red and blue sirens start blaring and the effect definitely adds to the suspense of the police chase. Once the chase has completed, the lighting goes back to a neutral color. Note that the LightSync effects aren’t just limited to the new G560 speaker system, the keyboard is seeing action, too.

What if I am using a headset?

I wondered if the RGB lighting effects of the G560 RGB would work while a wireless headset rather than routing audio through the speakers. I am happy to report that you will still get RGB lighting effects from the G560 when use a wireless gaming headset such as the Corsair Void Pro or Logitech Cloud Flight, both of which I used to test this functionality. This is good to know, as you might want to listen to music or play an online game late at night but still experience the RGB effects of the G560.

Logitech LightSync only supports a few games and programs thus far, but it does give an extra level of immersion in the games it does support without distracting me from gameplay. Hopefully more developers get on board with LightSync and build in LightSync support to their titles with the freely available API from Logitech. As it stands, I expect to see lots more games with RGB API support based on what I am seeing and hearing from my various industry contact. Unfortunately, with several companies having RGB API’s, you may see games supporting an API from Corsair, while Logitech and Razer don’t see support. It would be nice if an industry standard was created for PC gaming API lighting effects, but RGB ecosystems are more segmented than ever, with so many companies trying to do their own thing.

Let’s take a further look into LightSync and see how these speakers sound on the next page.