Switzerland-based Logitech has been producing speakers for the computer market for decades, with models ranging from budget desktop stereo speakers all the way up to multi-channel surround sound offerings designed to shake pictures off of the walls. Given their popularity and position in the industry, the chances of you or somebody you know having owned a set of Logitech speakers are pretty good. Today, we are looking at a new 2.1 speaker offering from the Logitech Gaming Division, or as it is branded, Logitech G. The Logitech G560 RGB PC Gaming Speakers are a set of stylized 2.1 speakers designed for the PC gaming market and these new speakers have some tricks up their sleeve like Bluetooth compatibility, on-speaker controls and get this, multiple RGB lighting zones powered by Logitech’s newly introduced LightSync software.

The newly-introduced Logitech LightSync is a part of Logitech Gaming Software that includes audio visualizers as well as screen sampling, allowing the G560 RGB PC Gaming Speakers to project image-matching light behind the monitor for ambient effect. Of course, the ability to set static lighting modes and other modes typically available in Logitech Gaming Software is available, but Logitech has really taken a major step by including more immersive RGB lighting modes that actually interact with what the user is watching or playing, rather than just providing  passive RGB lighting zones. I’ll be showing off what these speakers can do in conjunction with LightSync in just a bit, but the potential here is really great if you are into aesthetic customization.

The Logitech G560 RGB PC Gaming Speakers are a unique product, as no other manufacturer has speakers with in-game API powered ambient lighting integration, yet. While speakers with forward-facing RGB lighting effects like the Sound Blaster Kratos S5 have been on the market for a while, Logitech has really taken the RGB speaker concepts to the next level and rather than just giving users the ability to set lighting, they are going even deeper with game-reactive lighting and musical reactive modes. These speakers aren’t going to appeal to everybody, but I think that even if you aren’t interested in RGB lighting, it is pretty hard to deny that the G560 RGB speakers have a lot of potential and cool factor about them. Logitech is known for making quality desktop speakers, so even if you’re not a fan of RGB lighting, at least you know these should offer other values, like solid build and sound quality.

Logitech has a lot of experience with producing speakers for the PC gaming market, so I don’t just expect the G560 speakers to look good on my desk and do fancy lighting effects, they should also sound great. Featuring 120W of RMS power, with the satellites each capable of 30W RMS and the subwoofer capable of 60W RMS, the Logitech G560 should be more than adequate when it comes to providing clear sound with tight, controlled bass.

What’s In The Box

Logitech is offering just a 1-Year Limited warranty on the G560 RGB PC Gaming Speakers, which are available for $199.99 shipped. Given that there are two satellites and a subwoofer that could fail, I would like to see a two year warranty on a product priced with such a premium. I am actually kind of surprised to see that the G560 only have a one year warranty, because Logitech typically covers most products with a two year warranty. What’s up with that?

The G560 are compatible with Windows 7, 8.1 and 10 and also work with Mac OS X, but with DTS: X not supported. Since the G560 has a Bluetooth connection, it can be used to produce audio from any compatible Bluetooth device and has an impressive 25-meter range when in line-of-sight. The Logitech G560 speakers can be paired with two devices at a time in Bluetooth mode. 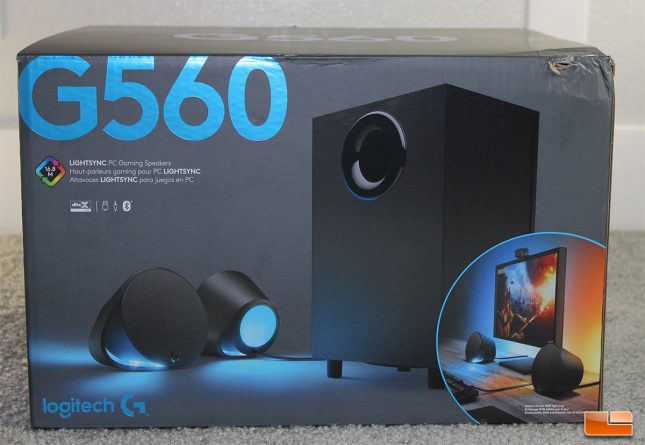 The Logitech G560 RGB PC Gaming Speakers come packaged in a fairly large box, with the G560 branding in blue text throughout. Logitech has done an excellent job with their packaging, as everything is presented very well on the exterior of the package and quality materials have been used. Unfortunately, my sample had the box damaged on a corner during shipping, but it didn’t seem to cause any major damage or issues with the the G560 speakers or any of the included components. I did notice a slight inward ding on my subwoofer that was barely noticeable and brought up the issue with Logitech, just in case they want to reinforce the corners of the box more to avoid potential issues in the future. 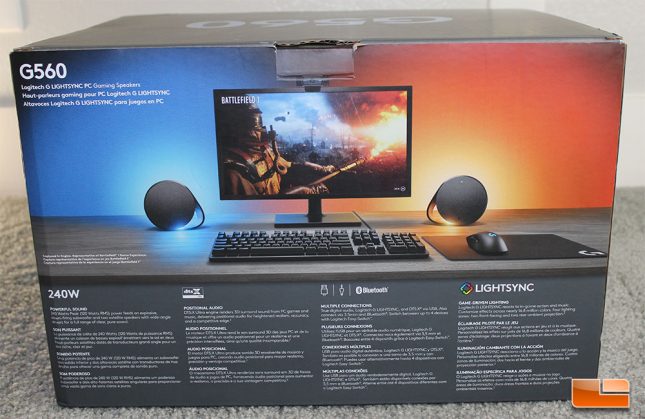 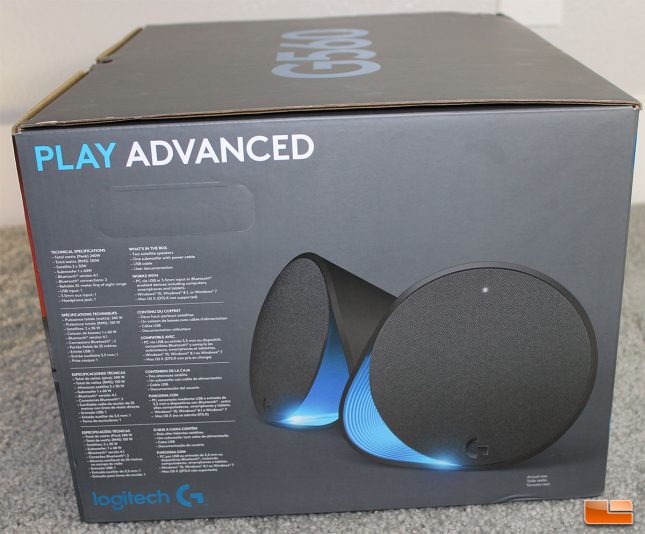 An illustration of the satellite speakers in actual size with blue LED lighting effects enabled is printed on the side of the G560 box, a really nice touch for users who want to gauge the size of the speakers before purchase. 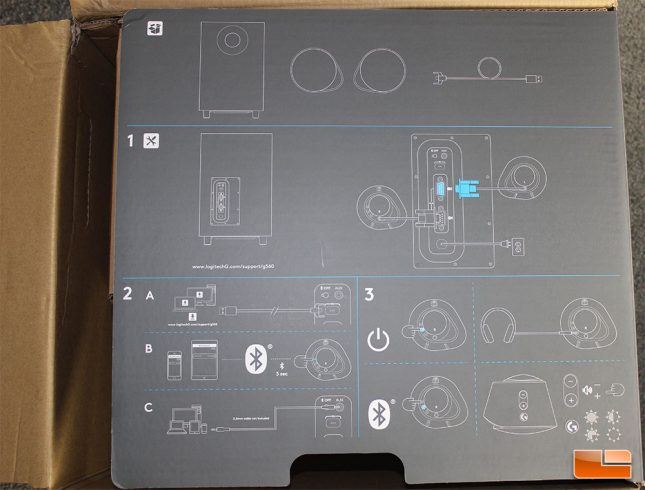 When I opened the Logitech G560 RGB PC Gaming Speakers I was greeted with a clear set of instructions to follow. I like that Logitech includes instructions in this manner, because they can’t be easily lost and you will see them before even touching a single component. I had an excellent teacher back in high school who taught me the value of reading instruction completely before assembly, so it is nice to see Logitech making their instructions so clear and easy to follow before you have gotten a single component out of the box.

Logitech includes a paper warranty guide with the G560 RGB, but the package doesn’t include any extras like stickers, posters or promotional materials.

Let’s take a closer look at the Logitech G560 RGB PC Gaming Speakers on the next page.