At the end of the the Lexar SL200 is an entry-level portable SSD aimed at the mainstream market. We were able to reach the drives rated speeds of 550 MB/s read and 400 MB/s write on our AMD X570 desktop test system without issue. Overall performance was decent and that is the problem with mainstream products in a crowded market. There are tons of SATA III powered portable SSDs on the market and it is tough to stand out. What does help the SL200 stand out a bit is the fact that it does have 256-bit AES encryption. Not all portable SSDs feature this level of enhanced security.

When it comes to build quality the Lexar SL200 feels and looks good. We tried to take the drive apart and the top aluminum cover was glued to the all plastic housing. All adhesives break down over time, but we don’t see this being an issue. The Lexar SL200 is covered by a 3-year warranty and this drive should last many years without issue. 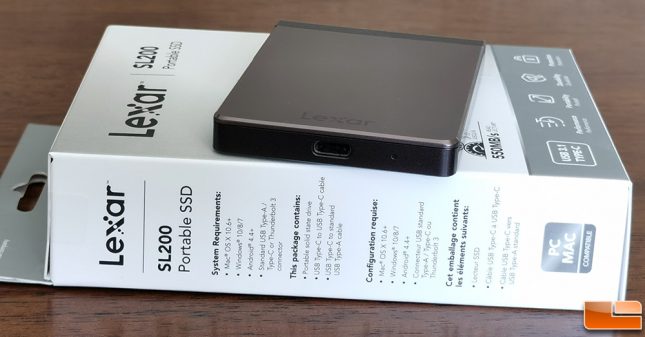 When it comes to pricing the Lexar SL200 1TB Portable SSD runs $159.99 shipped and that comes out to be about $0.16 per GB. That price point is going to be an issue for Lexar as their SL100 Pro 1TB portable SSD that features an NVMe SSD was much faster overall and runs $149.99 shipped. Based on the performance and feature set of the Lexar SL200 1TB, the $159 price point seems a bit high.

Legit Bottom Line: The Lexar SL200 1TB Portable SSD needs a more aggressive price point for what it delivers. If this drive is priced below $130 it would be a much more interesting drive!