We’ve experienced situations where Sandra wasn’t reading the memory properly, so we also ran the Windows System Assessment Tool (Winsat) as that is also a useful tool to check out memory performance. 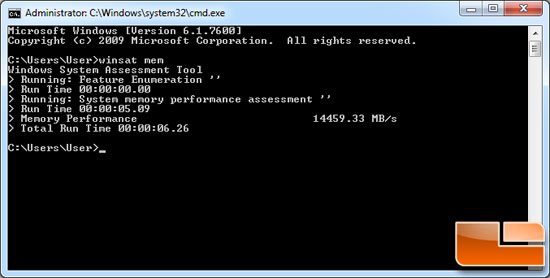 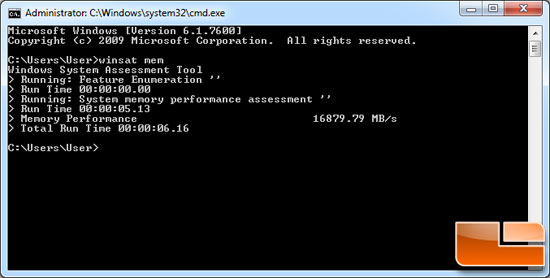 Benchmark Results: You can see that the score was 14459 MB/s with the 6GB DDR3 1333MHZ CL9 memory kit.  This confirms what we saw with Sandra 2011 SP1x as we had an integer memory bandwidth of 14.5 GB/s there as well. Running the test with the Kingston HyperX modules installed we see a the memory performance at 16879 MB/s. We aren’t hitting close to the 23.5 GB/s that was shown in Sandra, but the system is still showing a memory performance gain of 17% and that is no joke!

As you can see our system had a Windows 7 Index base score of 5.7 and the lowest scoring component on our ASUS K53E notebook is the graphics, which is the Intel HD Graphics 3000 that are part of the Intel Core i5-2520M Sandy Bridge processor. By increasing the memory performance of this notebook we also get a very nice boost to the graphics as it looks like the graphics core performance had a bottleneck on the 1333MHz memory kit that came with the notebook.  The Windows 7 Index base score was now 5.9, but notice that the hard drive was now the limiting factor!  The subscore of graphics, gaming graphics and memory all increased by switching to the Kingston HyperX Plug and Play 8GB 1866MHz RAM kit.  One wouldn’t expect the biggest performance boost from a memory kit upgrade would be on the graphics, but that is what Windows 7 is showing!