The successor to the Intel SSD DC P4500 series, the Intel SSD DC P4510 series, was first released to Cloud Service Providers (CSPs) in August 2017 and is now widely available. Intel updated this enterprise drive series by using the latest 64-layer 3D TLC NAND Flash memory and optimized the firmware for the controller to work in unison with the changes. Luckily for Intel, no controller change was needed. Getting the firmware right is critical on enterprise drives where reliability, endurance, latency and throughout all equally matter.

By moving over to 64-layer TLC 3D TLC NAND Flash memory, Intel was able to able to increase drive capacities and performance. The Intel SSD DC P4510 is available in 1TB, 2TB, 4TB and 8TB capacities. To get the maximum storage density for this series, Intel went with the U.2 2.5″ 15mm form factor on the PCIe 3.1 x4 interface with NVMe 1.2 certification. There are U.2 ports available on recently released high-end desktop motherboards and servers, but you can also purchase M.2 adapters that will allow you to run a U.2 drive over an open PCI Express slot. The P4510 Series enables up to four times more terabytes per server and delivers up to 10 times better random read latency at 99.99 percent quality of service than previous generations. Intel will be bringing out drives in this series using the new Enterprise and Datacenter SSD Form Factor (EDSFF) 1U Long ruler and 1U short form factors later in the year. 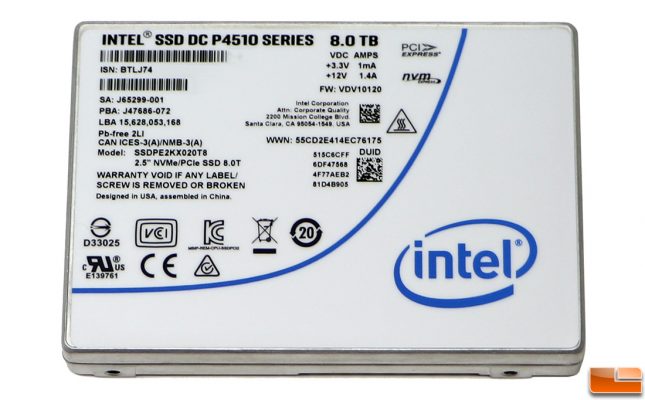 Performance on the new Intel SSD DC P4510 drive series is impressive. The flagship 8TB drive is capable of 3.2 GB/s reads with 3.0 GB/s writes when it comes to Sequential throughput. Random 4K read/write IOPs are are rated at up to 637K IOPS read and 139K IOPS write. The smaller capacity drives have similar read speeds, but have differing write speeds. The performance of the Intel SSD DC P4510 Series is solid and the power consumption isn’t bad with 16 Watts of power consumption at peak load.

Like Intels other data-center SSDs, these drives offer hardware AES 256-bit encryption, end-to-end protections from silent data corruption, enchanged power loss data protection, temperature logging, and are backed by a 5-year warranty. Endurance numbers are about as good as they get with a rating of 1 full drive write per day. That means over a course of a 5-year period you could write 14,600 TB to the drive or another words it has an endurance of 14,600 TBW or 14.6 PBW). If you are using the JESD219 JEDEC SSD endurance workload you get a little lower endurance rating of 13.88 PBW. This enterprise workload factors in a 24 hour work day use at 55C and has a transfer size distribution of 67% 4K, 10% <4K, 10% 8K and 13% 16K-64K. 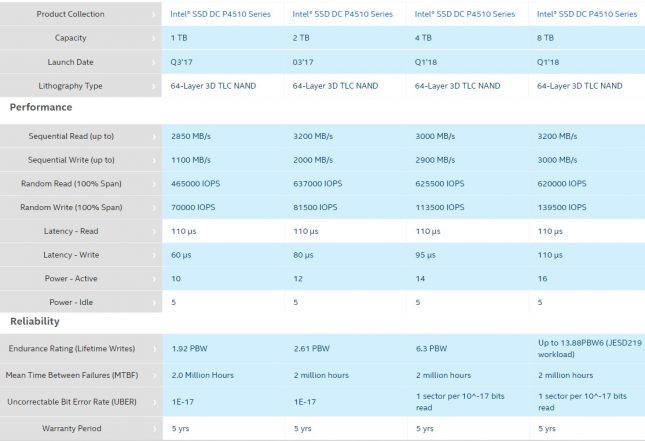 If you haven’t updated the drives in your datacenter in a number of years these single drive performance numbers should be mighty impressive. The price tag on these drives range from $654.99 to $5050.59, which sounds like a lot, but that breaks down to $0.63 to $0.65 per GB. That is actually rather good pricing for an enterprise drive series and just happens to be on par with high-end consumer SSDs that some try using to cut data center costs.

Today well be taking a closer look at the Intel SSD DC P4510 2TB and 8TB drives. The 2TB model is one of the more popular capacities right now due to the $1179.27 price point and the 8TB model is ideal for those that need that much storage space or want the most performance. Although at $5000, the 8TB model might be out of reach for some businesses. 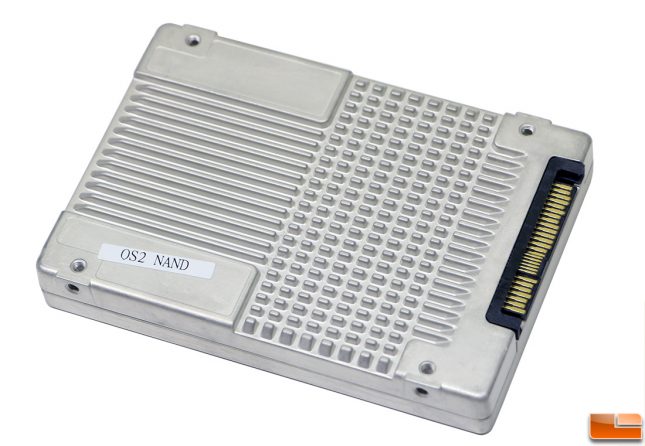 We won’t be opening up these drives as Intel did place thermal tape over the 64-layer 3D TLC NAND Flash memory and once the drive it opened the thermal performance will never be as good as it once was. We plan on keeping this drive around for future testing and din’t want to have any thermal issues. Inside we were told by Intel that there are two PCBs connected by a large ribbon cable and a large capacitor for the drives power loss protection features. 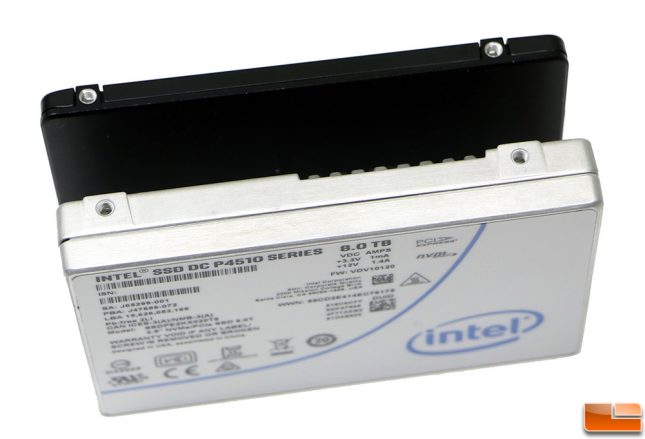 Having two PCBs and large capacitor means that this is going to be a thick U.2 drive and at 15.0 mm thick it dwarfs a typical 7 mm thick SATA drive as you can see in the image above. 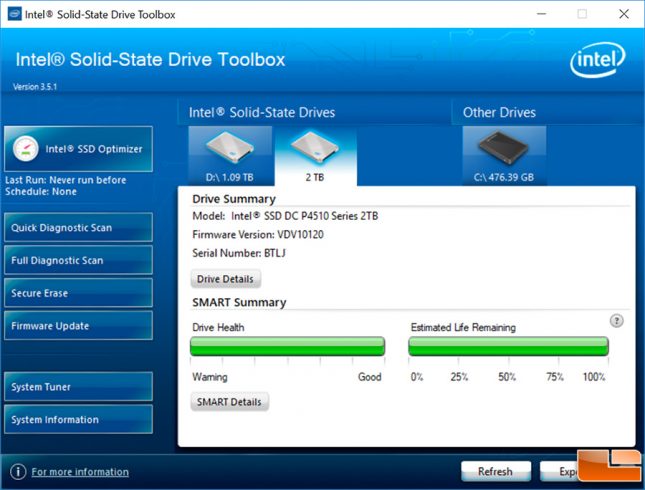 We should also mention that the Intel Solid-State Drive Toolbox works perfectly with the Intel SSD DC P4510 Series, so you can use it to monitor the drives and update the firmware in a Windows enthronement.

Let’s take a look at the Intel X299 test platform that we used and then move along to the benchmarks.