The Intel SSD 760p series 512GB M.2 PCIe NVMe drive that we tested performed better than expected. We weren’t sure what to expect from the new Silicon Motion SM2262 controller and Intel 64-layer 3D TLC NAND Flash memory, but you can say we were pleasantly surprised. We saw major performance improvements across the board when compared to the Intel SSD 600p series 512GB drive. The Intel SSD 760p series will eventually replace the Intel SSD 600p series and it most certainly raises the bar for what one can expect for an entry-level desktop/laptop consumer drive. We also like the fact that Intel will soon be  coming out with 760P series drives in 1TB and 2TB capacities in the 1H 2018.

When buying an SSD the most important thing is picking out the right size drive. After that you will likely be constrained by your budget. The bad news on the price front is that the Intel SSD 760p series drives are selling for well over their MSRPs. The Intel MSRP on these drives is $199 for 512GB, $109 for 256GB and $74 for the smallest 128GB drive. That puts the Intel SSD 760p 512GB drive that we reviewed today at $0.39 per gigabyte. That isn’t too bad for the level of performance that this drive offers, but we couldn’t find it for that price online. 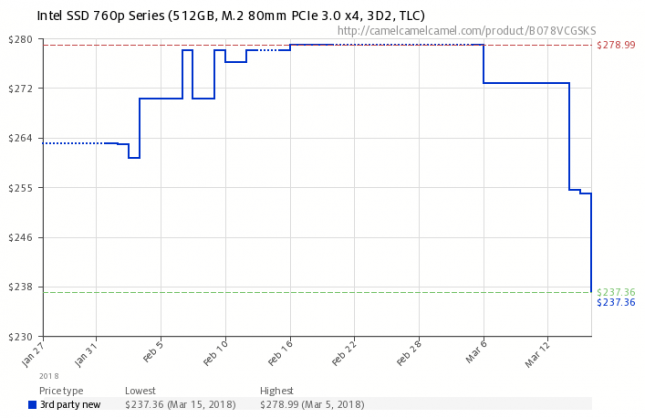 According to to Amazon price tracking websites the street price of $238 for the Intel SSD 760p 512GB drive is the lowest it has ever been. If the street price of this drive was closer to the MSRP it would dominate on the price versus performance front and it looks like the price is starting to trend downwards here in March 2018.

At the end of the day the Intel SSD 760p 512GB drive is a very good entry-level SSD. We like the drives $199 MSRP ($0.39 per GB)  and would easily recommend it at that price or less. Right now we can’t find it online for less than $237.59 shipped ($0.46 per GB) and that makes it tougher to recommend. This drive should be one that you consider though if you are looking for a solid performing entry-level drive for mainstream desktop or laptop. If you still have a SATA III hard drive or SSD and are looking to upgrade to a PCIe NVMe drive the Intel SSD 760p series would make for one heck of an upgrade. They also have a decent endurance rating and 5-year warranty. We wouldn’t overpay for this drive, but if you can find it for the right price you might not want to pass it up!

Legit Bottom Line: The Intel SSD 760p Series has major performance improvements over the Intel SSD 600p series and we like the all blacked out look.