Looking at the Avenger AG2 notebook chassis you see a sleek looking notebook, which is hard to create with a ton of features in a 12.1″ notebook size. Below are some pictures that show all the sides of the notebook and list the important features found on the outside. 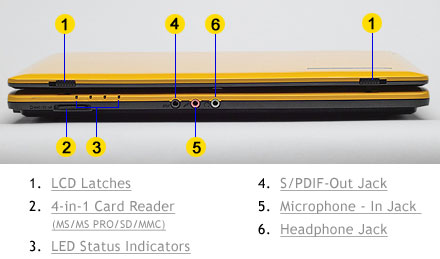 The notebook has a built-in 7-in-1 card reader (MS/MS PRO/MS DUO/SD/Mini-SD/MMC/RSMMC), so you can plug in an array of media cards directly onboard. Our Canon EOS SLR camera system uses Compact Flash, so we needed to use an adapter for some of our media cards. The latches on the Hypersonic AG2 are independant from eachother, so both must be operated for the LCD display to be opened. 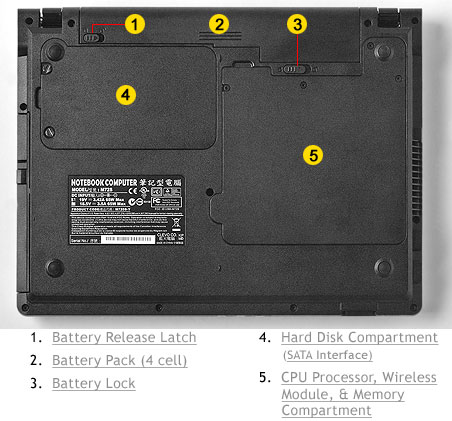 The chassis does offer a Kensigton lock on the rear of the right side, which is needed to secrure your laptop at LAN parties, your dorm, or at work. On USB 2.0 ports is found on this side next to the RJ-11 Modem (V.90 & V.92 Compliant) port. The 8X DVD±R/RW + 4x Dual Layer Combo drive is also on this side. 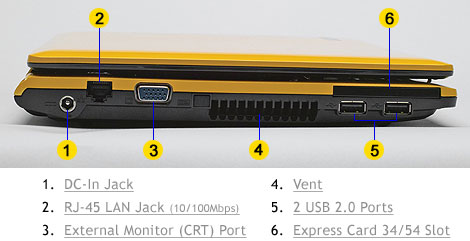 The left side of the chassis has the RJ-45 LAN (10/100/1000 Mbps), which is placed right next to the where the AC adapter plugs in. Two more USB 2.0 headers are found here and the IEEE 1394 port isn’t labeled, but it’s the covered area just to the left of the CPU heat sink exhaust port. Last, but not leas we have the PCMCIA Card slot (ExpressCard Slot) for both ExpressCard/34 and ExpressCard/54 formats and the VGA port. 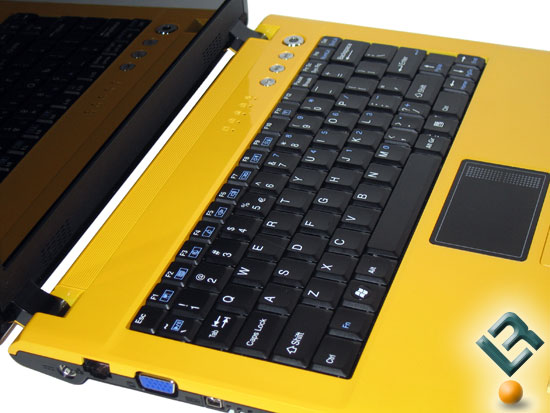 Opening the notebook we see that the LCD display is recessed when it opens thanks to the curved hinges. The keyboard is a standard A4 sized keyboard, which is known by many as the mini slim format. If you’ve never typed on one of these smaller keyboards it will take some getting used to! 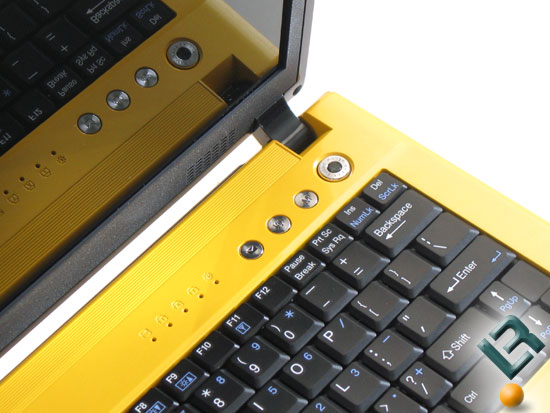 In the top-right corner of the notebook one can find the power buttons and three quick-access buttons can be found. The first launches mail, the second launches the Internet browser and the third controls the fan speed, which switches between Silent and Normal. A series of status indicator LEDs are located to the left of the four buttons and show you what is going on when the notebook is being used (Scroll Lock, Caps Lock, Num Lock, HDD activity, Fan Mode). If you look above the buttons you can see one of the two speakers that are integrated into the LCD display housing. They work, but don’t produce the sound quality of other notebooks that we have tested. Also take note of the glossy LCD display! If you like a matte finish then you might want to see if Hypersonic can customize it for you as the high gloss screen is just that. 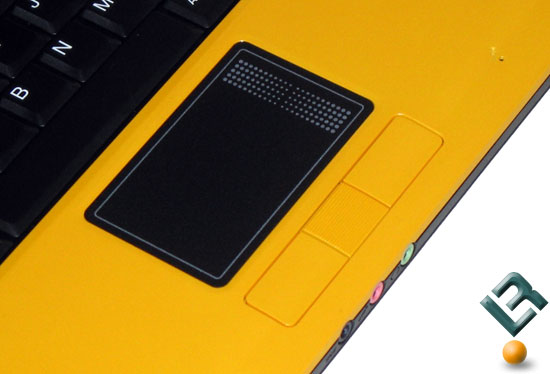 A touchpad is located right in the middle of the laptop below the keyboard to control your mouse pointer.  Below the touchpad you will find two buttons for the left and right mouse click. In order to scroll through documents easier you can drag on the right side of the touch pad, where the white dotted area is. If you have used a notebook before, you’re looking at a picture of an integrated touchpad with scroll bar. The microphone is located to the right of the touchpad.