Normally we do not start off a memory review with an overclocking section, but we wanted to show you our manual attempts to improve memory performance in our benchmark results. The DDR4 memory kits that we have looked at in recent weeks haven’t been that good of overclocked and this kit unfortunately shared that trait. We were unable to successfully boot into Windows 8.1 at 3200MHz or beyond. From what we have been told by various memory companies, it has been very tough to sort memory to build kits at 3000MHz and beyond. For inquisitive minds we are talking about low single digit percentages for DDR4 ICs that can run 3000MHz or faster, so that is one of the reasons that DDR4 memory prices start to greatly increase once you get to 2800MHz memory kits. Since the memory companies are sorting these initial batches of memory it is very unlikely that we’ll be seeing any stellar overclocking results as if the modules you have could do better they would have been sold as a faster kit from the get go. Companies like G.Skill are charging $120 premium for a 3333MHz memory kit versus the 3300MHz memory kit, so it is crystal clear that there is heavy binning going on and that every MHz counts right now.

Our G.Skill 16GB (4x4GB) 3000MHz DDR4 memory kit (part number F4-3000C15Q-16GRR) features CL15 timings and uses 1.35 Volts. We tried to get this kit running at 3200MHz with the 100MHz CPU strap and 3250MHz with the 125MHz CPU strap and failed to do so even after increasing the DRAM voltage up to 1.50V. We were trying with CL15 and CL16 timings, so we couldn’t get this kit at 3200MHz with 16-16-16-36 2T timings. Intel informed us that 1.50V is the highest that they allow memory companies to set XMP profiles for Intel Haswell-E processors, so we’ll stop and what they are calling the safe range. We then We were able to manually overclock the base clock of the processor and get the memory kit up to 3100MHz with full stability, so there is about 100MHz of overhead in this kit and to get it you’ll need to do some manual overclocking. This changes the clock frequency of the processor and would sku our benchmark results, so we didn’t bother testing the kit at 3100MHz. Instead we wanted to see how tight we could get the timings. 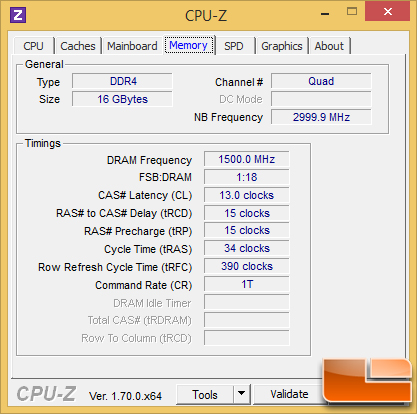 At 3000MHz we were unable to get the G.Skill F4-3000C15Q-16GRR memory kit to run at a 1T command rate or drop the CAS Latency (CL) down to 14. We were pretty frustrated at this and tried throwing more voltage at the processor. By bumping up the DRAM voltage up to 1.4V we were able to get CL14 and a command rate of 1T stable (see above). The benchmark results at this setting were pretty good as we were getting nearly 69GB/s on the copy test in AIDA64 and the latency of the kit was down to just under 63ns! 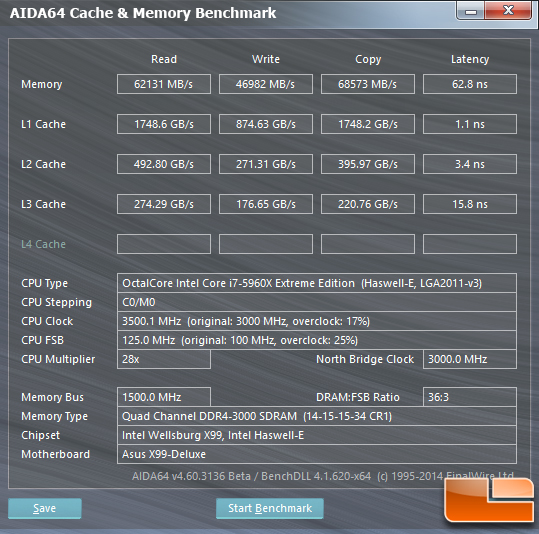 After increasing the memory voltage to 1.5V we were then able to drop down to 13-15-15-34 and still keep the command rate at 1T. We tried to get 13-14-14, 13-15-14 and even 13-14-15 timings and no matter what we did we couldn’t get the system to post. The ASUS X99 Deluxe motherboard would get us Q-Code error ‘bd’ when we tried to go tighter and after failing to tighten up the timings after a couple hours we figured this would be a good place to stop and run all the benchmarks at. There might be a little more room left in this kit if you wanted to throw more voltage at it, but it doesn’t appear to be worth it from what we have seen.