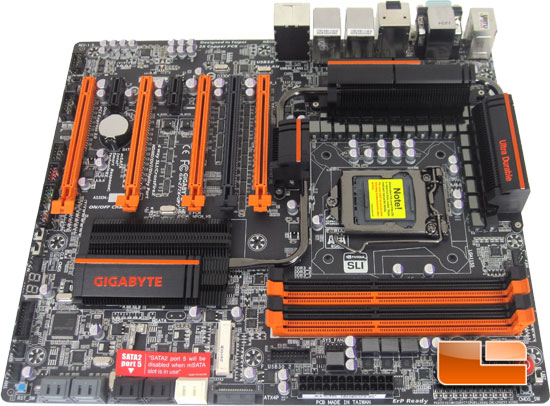 Despite the fact that I’m not wild about the orange on the GIGABYTE Z77X-UP7, it works. It’s contrasted by the black enough to make a sharp looking motherboard. Even if I absolutely hated the orange (which I don’t, just not wild about it) it wouldn’t stop me from looking into the Z77X-UP7 next time I need a motherboard. As long as the board has the performance and features I need, the color and style is completely irrelevant to me. 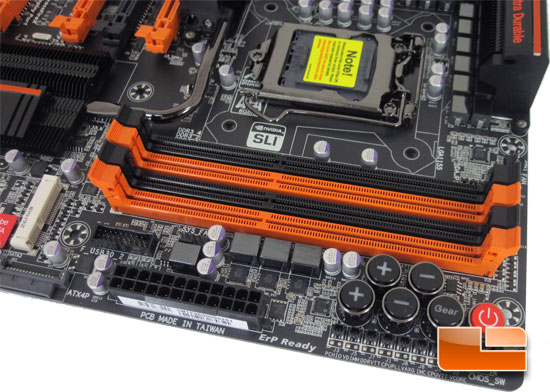 Taking a closer look at the GIGABYTE Z77X-UP7 we can see there is a lot to this board. Starting off in the first corner we can find our OC-Touch controls. From here we can increase the system Bclk, CPU ratio, and the OC Gear (Bclk Steppings). Below all of the buttons we have a series of voltage check points. Buried in the corner we can see the CMOS Clear button, and the LN2 mode switch. The LN2 switch reduces the system to a x16 CPU multiplier, this can help out during overclocking. The LN2 mode switch helped me get into the system BIOS without having to reset the BIOS when my overclock was to aggressive. To the left of all the overclocking goodies, we can see the 24pin motherboard power, and the internal SuperSpeed USB 3.0 header driven by the Etron EJ168 chip. The GIGABYTE Z77X-UP7 will support up to 32Gb of DDR3 DRAM with speeds as fast as 2800MHz! 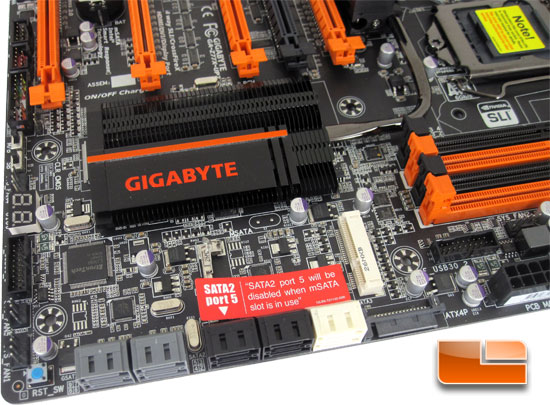 Swinging the GIGABYTE Z77X-UP7 around, there is no shortage of connectivity here. There is a grand total of 10 SATA ports onboard. The six on the the right (dark grey and white) are controlled by the Intel Z77 chipset. The pair of white SATA ports are the native SATA III 6Gbps ports while the dark grey are SATA II 3Gbps. The four light grey on the left are SATA III 6Gbps and are controlled by a pair of Marvell 88SE9172 chips. Just behind the Intel Z77 controlled SATA ports is a single mSATA connector, be aware that using this does eliminate SATA2 port 5 though. Along the edge we can find a pair of system fan headers, and a second internal SuperSpeed USB 3.0 header. Just past the USB 3.0 header is the debug LED display, and another 4pin system fan header 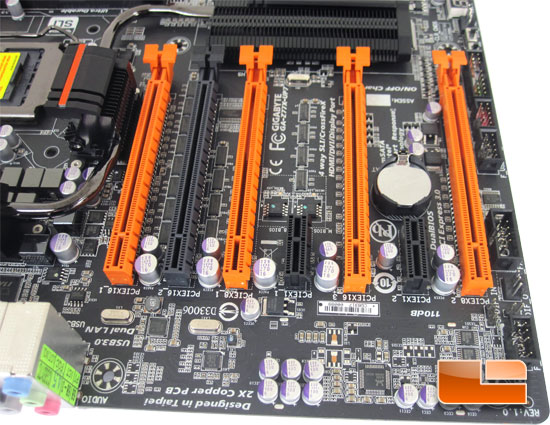 The GIGABYTE Z77X-UP7 features five PCIe x16 slots. Three of the slots run at x16 while two of them run at x8. All five of the PCIe x16 slots conform to PCIe x16 Gen 3, and will run at that when paired with a compatible processor like the Intel Core i7 3770K we will be using today. Along the front edge of the Z77X-UP7 we can see several of the IC’s that add to the performance of the board, including the Realtek ALC898 Hi-Def audio codec, Atheros Gigabit Ethernet Controller, and the Intel Gigabit Ethernet controller. If you are running a single graphics card, it is recommended that it is plugged into the grey PCIe x16 slot (PCIEX16_2). This slot has a direct link to the CPU, which allows it to bypass the PLX chip. 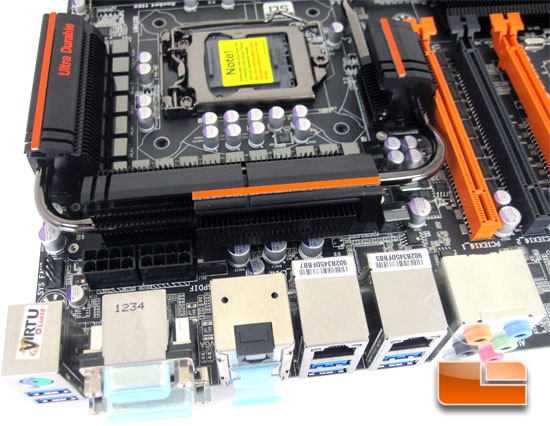 Behind the I/O panel we can find a pair of 8pin CPU power plugs. Only 1 is required to be used and it can be used with a 4pin CPU power plug from the PSU if that is all you have. Though if you’re buying a $399.99 motherboard, it’s doubtful that you’re running a low-end power supply.

The back panel features the typical items that we see on most boards. One thing that there isn’t is any USB 2.0 ports, the GIGABYTE Z77X-UP7 has all SuperSpeed USB 3.0 ports on the back panel. The pair on the left under the PS/2 ports are controlled by the Intel Z77 chipset, while the remaining four are controlled by the VIA VL800 SuperSpeed USB3.0 contoller. In addition to the SS USB 3.0 ports, we have a 15pin D-Sub VGA port, DVI-D port, HDMI, and a DisplayPort. There is also a pair of RJ45 Gigabit Ethernet ports, one is controlled by the Intel GbE controller while the other is an Atheros GbE controller. 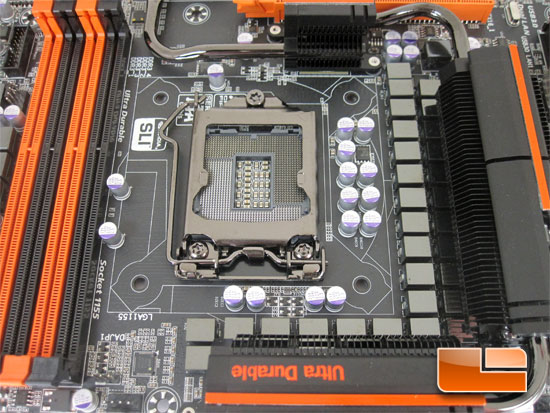 The area surrounding the Intel LGA1155 socket is certainly not bare. The CPU power delivery method on the GIGABYTE Z77X-UP7 uses a 32+3+2 phase power design! Breaking the 32+3+2 Phase design down, there are 32 Phases for the CPU, 3 phase design for the Intel HD Graphics, and 2 VTT phases!