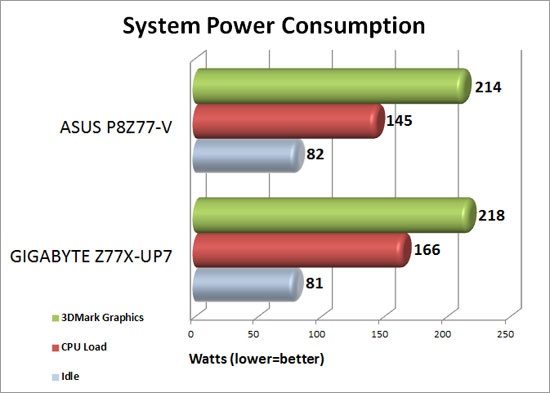 Benchmark Results: Power consumption was pretty close between the two boards today. There is a little bit more of a difference under the CPU load than I would like to see though. The ASUS P8Z77-V was pulling only 145 Watts at the wall, compared to the GIGABYTE Z77X-UP7 pulling 166 Watts. Idle power consumption was within 1 Watt with the Z77X-UP7 pulling 81 Watts and the ASUS Counterpart pulling 82 Watts. Running 3DMark 11 the GIGABYTE board hit a peak of 218 Watts while the ASUS P8Z77-V pulled 214 Watts.