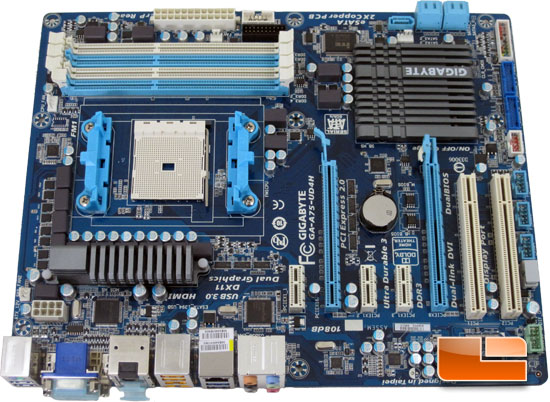 With the recent release of the AMD Bulldozer platform, the AMD A75 chipset may be slightly overshadowed at this point in time. Though the A75 and AMD A-series APU’s still have a place out there. In our tests today, the GIGABYTE A75-UD4H was compared strictly to other AMD A75 motherboards. If your curious how well the GIGABYTE A75-UD4H motherboard and AMD A8-3850 APU compares to the AMD FX-8150 ‘Bulldozer’, you can find that out in our AMD FX-8150 Processor Review.

GIGABYTE has a solid stack of AMD A75 motherboards. If the A75-UD4H isn’t the right choice for you, take a look at the other boards GIGABYTE has to offer and I’m sure you’ll find one that suits your needs. Though with a ten dollar price difference between the two ATX motherboards the A75-UD4H would be my choice between them, Though everyone has different needs and budgets.

Ultimately, the GIGABYTE A75-UD4H is a solid motherboard at a great price. The fact that it is priced at only $114.99, makes this motherboard a great contender. The performance was on par with what we have seen on our previous AMD A75 motherboards. Another great feature of GIGABYTE motherboards is the warranty! All GIGABYTE motherboards (with the exception of Micro ITX which carries a 15 month warranty) are backed by a three year warranty.