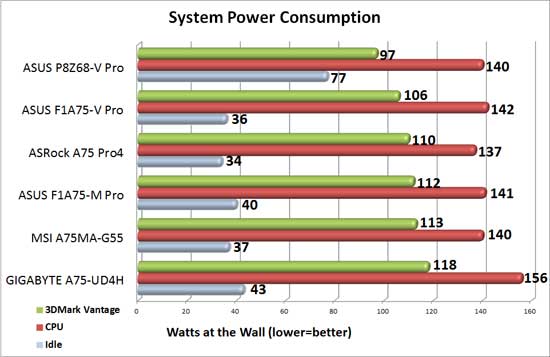 Benchmark Results: The GIGABYTE A75-UD4H pulls more power across all of our tests. Sitting idle the A75-UD4H pulls 43 Watts at the wall, while the lowest power consumption at idle that we have seen is the ASRock A75 Pro4 which pulls only 34 Watts. Firing up Prime95 Large FFT’s the GIGABYTE A75-UD4H pulls14 Watts more than the next lowest board and 19 Watts more than the lowest board. When we fired up 3DMark Vantage to simulate gaming performance, the GIGABYTE Socket FM1 motherboard continued to pull the most power with 118 Watts.