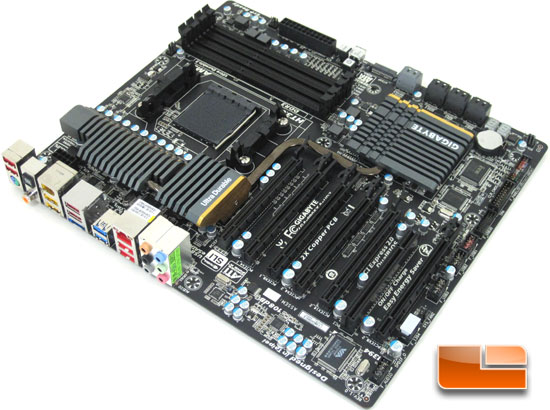 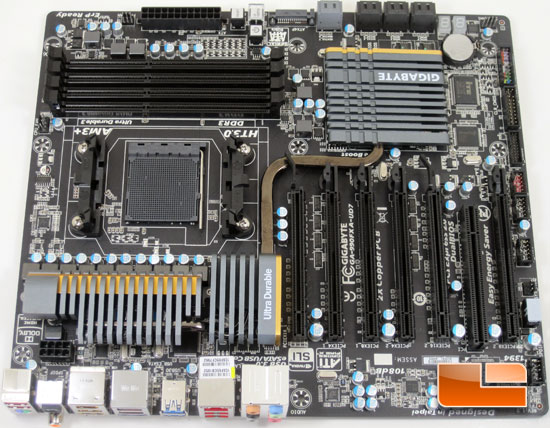 Earlier this year GIGABYTE announce that they were starting to build their motherboards with a black on black motif. While this may be a generic color scheme, since many manufacturers are doing this or something similar. It is definitely an improvement over the technicolor design they were using. 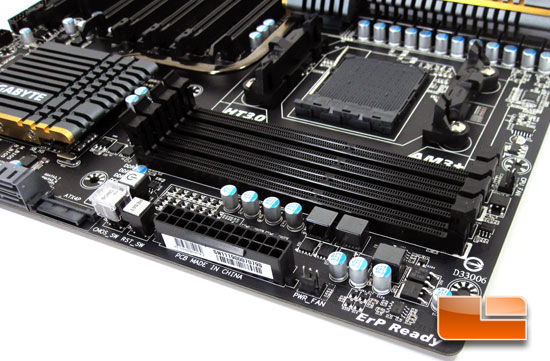 The GIGABYTE 990FXA-UD7 supports up to 32Gb of memory in a dual channel configuration. When it comes to the speed of the DIMM’s the 990FXA-UD7 will support up to 2000MHz(O.C.). Just above the DIMM slots is the AM3+ socket, the black socket is a dead giveaway that it is the AM3+ and not the older AM3 socket. Along the edge of the GIGABYTE 990FXA-UD7 we can see the 24 pin motherboard power plug. To the left of the 24 pin plug we have a series of three buttons, power/reset/ and a Clear CMOS button. 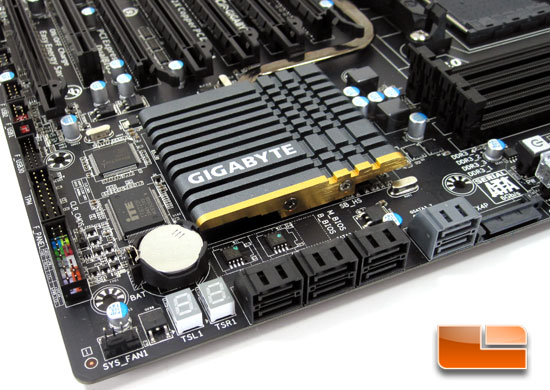 The GIGABYTE 990FXA-UD7 features 8 SATA III 6Gbps ports. Six of the SATA III ports are controlled by the AMD SB950 chipset, the remaining two grey SATA III ports are controlled by a Marvell 88SE9172 controller. To the right of the SATA III 6Gbps ports is a SATA power connector, this is used to deliver extra power to the PCIe slots. GIGABYTE recommends connecting this if you are running two or more graphics cards to improve system stability. To the left of the SATA ports is the Debug LED’s, and a four pin system fan header. Running our eyes up the left edge of the GIGABYTE 990FXA-UD7 we can see the pin out for the front panel, TPM (Trusted Platform Module, and SuperSpeed USB3.0 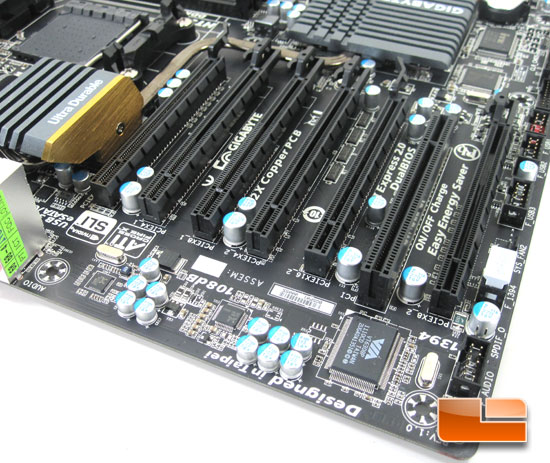 Swinging the GIGABYTE 990FXA-UD7 around, we can see that it is equipped with six PCIe x16 slots and a single PCI slot. The 990FXA-UD7 supports both 4-way NVIDIA SLI and 4-way AMD CrossFireX! If we pick up were we left off along the edge of the PCB, we can see three internal USB 2.0 headers, a single internal IEEE1394 header, SPDIF out, and the front panel audio header. 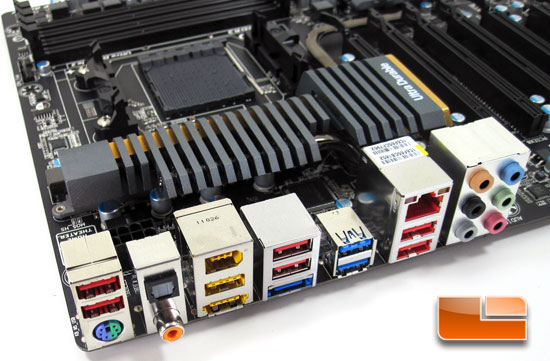 GIGABYTE didn’t leave much off of the back panel! It is equipped with nine dedicated USB ports, two of the ports are SuperSpeed USB 3.0 and the remaining seven are USB 2.0. There is also a pair of eSATA ports, one of the eSATA ports (yellow) is also a USB port. The pair of eSATA ports are both controlled by a second Marvell 88SE9172 chip. We can also see a single PS/2 port that can be used for either a keyboard or mouse, SPDIF out (optical and coaxial), Firewere (Ieee1394a), RJ-45 LAN port which is controlled by the Realtek RTL8111E GIGABIT Ethernet Controller, and the typical six audio jacks.