Overclocking with the GIGABYTE 990FXA-UD7

Overclocking greatly varies due to what hardware is being used and
who is doing the overclocking. Always remember that no two pieces of
hardware will perform the same, so our results will differ from what you
might be able to get.

AMD said that you should be able to hit 4.6GHz on the AMD retail boxed CPU cooler and 4.9GHz on all of the cores. To try this out we gave it a shot  was used for
overclocking, so we’d expect this overclock to be easily reached by anyone! 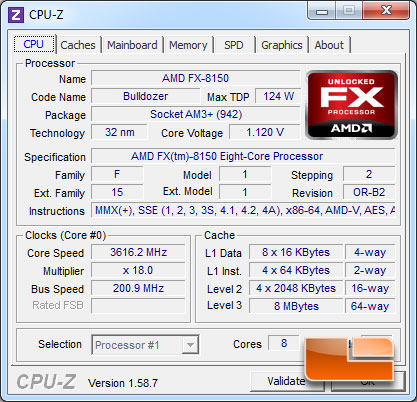 The AMD FX-8150 starts off at 4200MHz in ‘CPU Max Turbo’ mode, so it should be that hard to get to 4.6GHz or 4.9Ghz right? The FX-8150 starts off with a base clock of 200MHz
with a multiplier of 21. All AMD FX series processors feature an unlocked multiplier, so you can both lower and raise the multiplier in the BIOS. You can also adjust the base clock frequency to better dial in the overclock. Since we were time limited we overclocked by just using the multiplier to see how far we could push our processor. 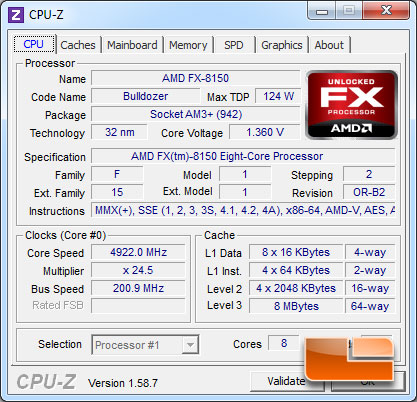 When I first got my samples in hand and started to play with the overclocking, we weren’t able to even complete post at anything over 4.6GHz on the ASUS Crosshair V Forumla. In order to hit 4.9GHz we had to disable four of the cores on the AMD FX-8150 processor. We had initially layed that blame on the processor itself. Within the first few minutes we were able to hit 4.6GHz on the GIGABYTE 990FXA-UD7, and in all honesty we weren’t expecting to get past this point. We had to try though! We increased the multiplier to 23.5 which would give us 4.7GHz, and we watched to see what would happen. To our shock and pleasure the 990FXA-UD7 completed the POST, next thing we know we were successfully booted into windows! We pushed a bit further with a x24 multipler and same result we were in Windows! Figured we would give it another go with 24.5 and it went right into Windows without complaining. We weren’t super stable at 4.9GHz we could only get a few minutes of Prime95 to run before we crashed, but that can be fixed with a little bit of voltage. We just happen to be running on air cooling and don’t want to push to much voltage through the chip, at least not yet. We still have more AMD 990FX motherboards waiting for this chip. The only settings we had to change in the GIGABYTE 990FXA-UD7 BIOS is the multiplier to 24.5 and we added .3 Volts to the CPU Voltage.