Gigabyte Technology announced the AORUS Gen4 7000s SSD series during CES 2021 and they are just now hitting the market. The AORUS Gen4 7000s is a high-performance M.2 NVMe SSD comes in either 1TB or 2TB capacities. Both are capable of reaching 7 GB/s read speeds with no throttling! That is because AORUS Gen4 7000s series drives comes with a large thermal solution to help temperatures down.

The performance numbers on this drive are solid. You are looking at sequential speeds are up to 7,000 MB/s read and 6,850 MB/s write for 2TB model. Random 4K performance is up to 650,000 IOPS read and 700,000 IOPS write. Impressive performance numbers, but not a shock as this series uses the Phison E18 8-channel controller with Micron B27B 96-Layer 3D TLC NAND Flash. We’ve reviewed a number of drives with this configuration and this combination is quick! 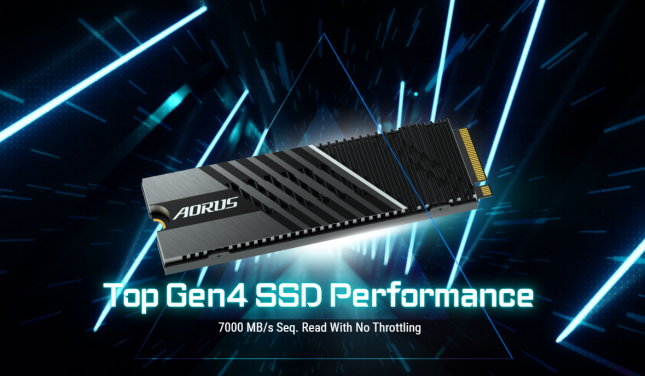 In order to reach these impressive speeds your system will need to support the PCIe 4.0 interface, but thankfully both Intel and AMD have platforms that do. AMD X570 and B550 motherboards or Intel Z590 and some Intel Z490 boards will work. The performance numbers between the AORUS 7000s in 1TB and 2TB capacities are different. We made the table below to show you were the key differences are at.

Pricing on the AORUS 7000s series is priced at around $0.19 to $0.20 per GB when this review was published. Both models are backed by an industry standard 5-year warranty and solid endurance ratings. The endurance rating is 700 TBW for every 1TB of storage space. This means you can write about 383.5 GB of data to the 1TB or drive every single day for five years and be right at the drives endurance rating. The 7000s 2TB model can do 767.1 GB of writes per day over the course of five years. Most people don’t come close to writing this much data to the drive. 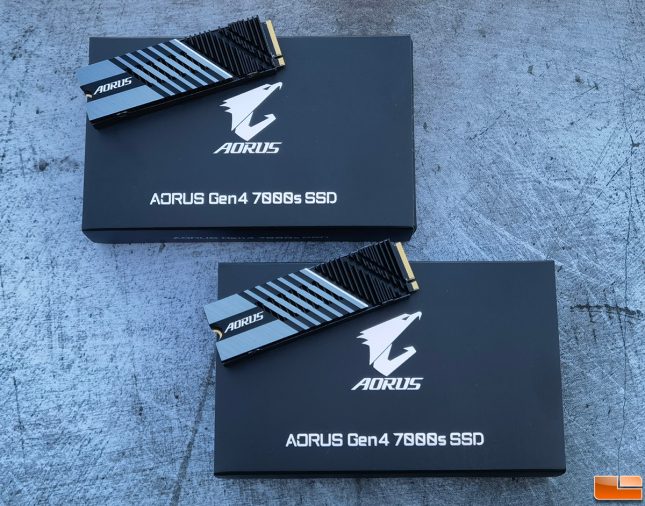 Gigabyte sent Legit Reviews the AORUS Gen4 7000s 1TB and AORUS Gen4 7000s 2TB for us to check out our AMD Ryzen X570 platform! Having both capacities is nice as we can show you how the performance is different between the two models. 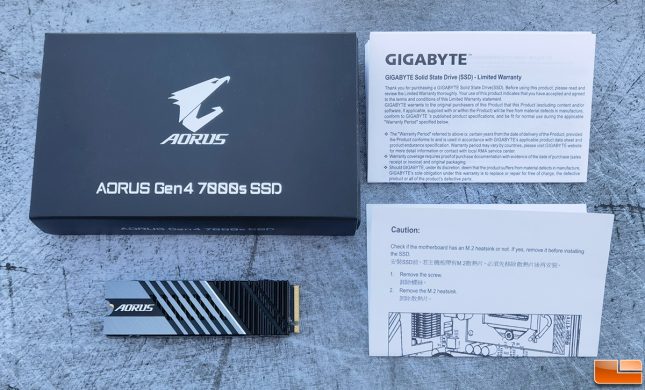 Inside the box you get the drive, heatsink removal instructions and warranty information. 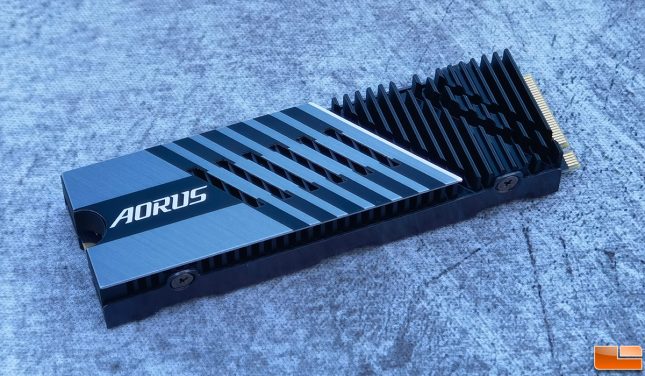 The AORUS Gen4 700s is one of the most visually stunningM.2 SSDs that we’ve ever had. The pictures here really don’t do it justice. 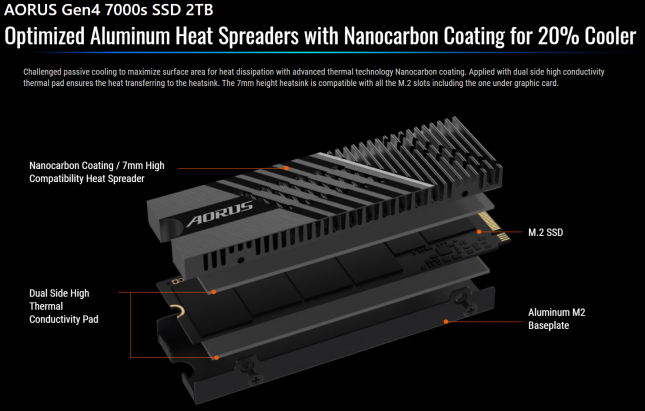 When it comes to the aluminum heat sink, it loos like Gigabyte spent some time designing it. The fully assembled drive measures 11.4mm in height and the top heat spreader section is 7mm in height. The marketing images from Gigabyte shows that it has a nanocarbon coating. Gigabyte says this new high efficient heat spreader improves thermal dissipation over a regular heat spreader. They claim it helps the drive run 5 times longer at 7 GB/s with it. 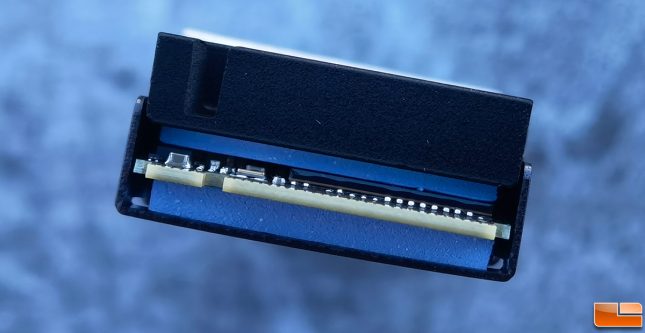 In the image above you can see across the rows of heatsink fins. If you motherboard already has a integrated cooling solution for M.2 SSDs you will need to remove this heat spreader. That can be done by removing the four Philips screws and simply taking the M.2 SSD out. Doing this will ensure the single-sided drive will fit in any desktop or laptop that has an M.2 2280 slot! 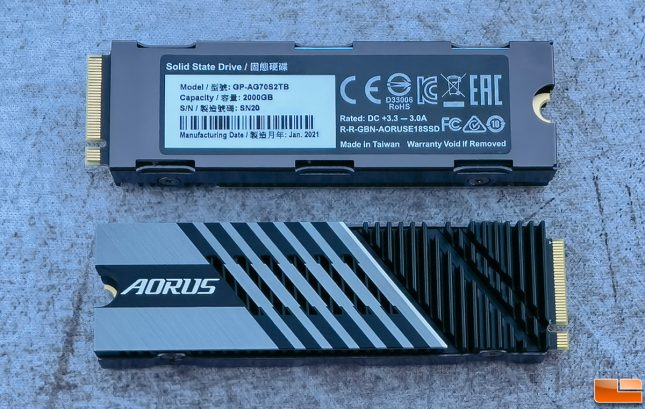 On the back of the drive enclosure you have the label with the usual information in both English and Chinese. 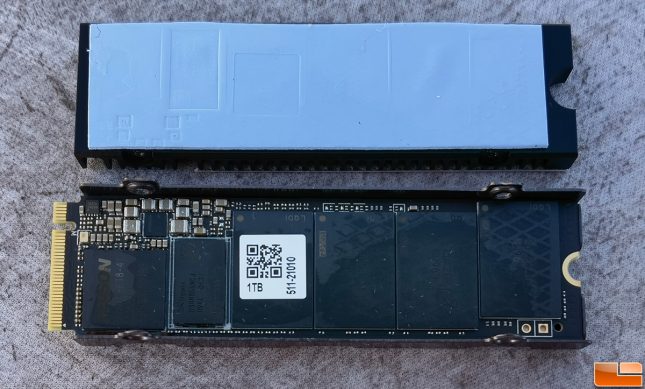 With the heat spreader removed on the 1TB drive we get a look at the SSD for the very first time. It looks like Gigabyte is using the Phison E18 reference design. We were a bit shocked that the thermal pad is not making full contact with the Phison E18 controller despite being pretty thick. We removed the heat spreader after testing, so the temperature numbers found later in this review are from how it shipped from the factory.

The Micron NAND Flash chips have FBGA code NW964 etched on the top of them. Looking this number up shows reveals that their part number is MT29F2T08EMLCEJ4-R:C. This is Micron B27B 96L TLC Flash that typically operates at 1,200 MT/s. 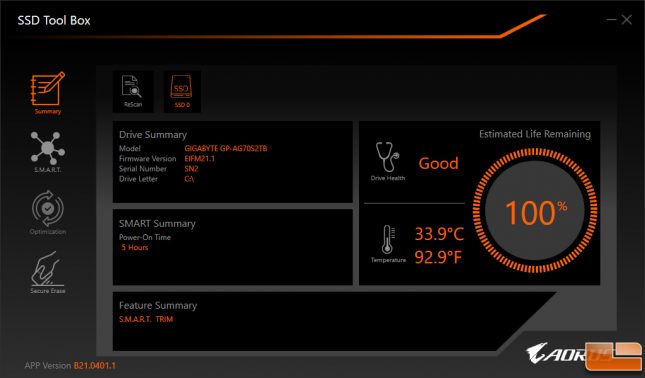 The AORUS SSD Tool Box can be downloaded for free and used in conjunction with the 7000s series. It offers very basic functionality and is nothing to really write home about. The optimization and secure erase tabs were not available when we used the 7000s as a primary OS drive for testing. You can basically see the S.M.A.R.T. details and general info with the utility.

Let’s take a look at the test system and then see how the AORUS Gen4 7000s performed.