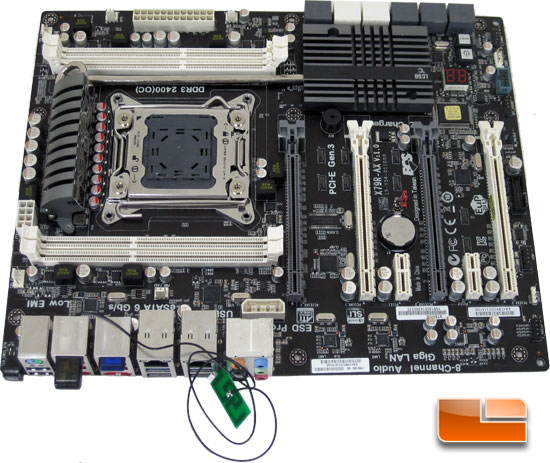 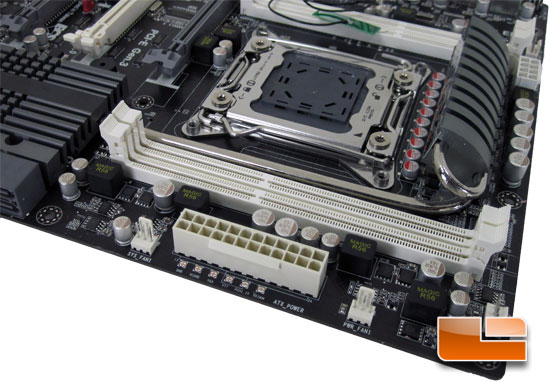 The ECS X79R-AX only has four DIMM slots for memory and will support up to 64GB of memory in quad channel once 16GB DIMMs become available, it will also support DDR3 DIMMS up to 2500MHz (O.C.). Along the edge of the ECS X79R-AX we have three 3pin fan headers and a typical 24pin motherboard power plug. Just in front of the motherboard power is six pads to check various system voltages. The available voltages that can be checked include; 1x Ground, 1x Vcore, 1x VSA, 1x VTT, 1x PCH 1.1V, and VDIMM. 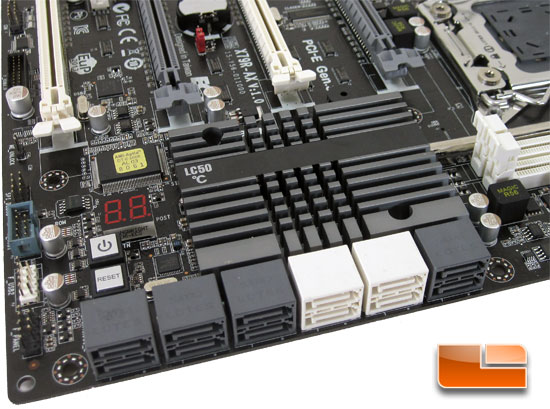 ECS has packed an impressive 12 SATA ports onto the ECS X79R-AX. Starting with the right side of the SATA ports we have a pair of SATA III 6Gbps ports controlled by the Intel X79 chipset followed by a four SATA II 3Gbps SATA ports also controlled by the Intel X79 chipset. When the Intel X79 Express was on the drawing board it was planned to contain SAS ports (Serial Attached SCSI). It was later dropped because Intel was having issues with compatibility. ECS has decided to leave the SAS ports enabled on the X79R-AX. The official word is that they will run at SATA III 6Gbps speeds, with limited compatibility with SAS devices. If you are planning on running a SAS drive on the ECS X79R-AX it may be a bit of a crap shoot as it’s not officially supported. The remaining pair of SATA ports run at SATA III 6Gbps speeds thanks to an ASMedia ASM1061 SATA III 6Gbps controller. Behind the SATA ports we have the onboard power and reset buttons, aka Easy Button. Along the edge of the ECS X79R-AX we have the front panel header, a pair of USB 2.0 internal headers, SPI Debug Header (factory use only), and an ME unlock header. 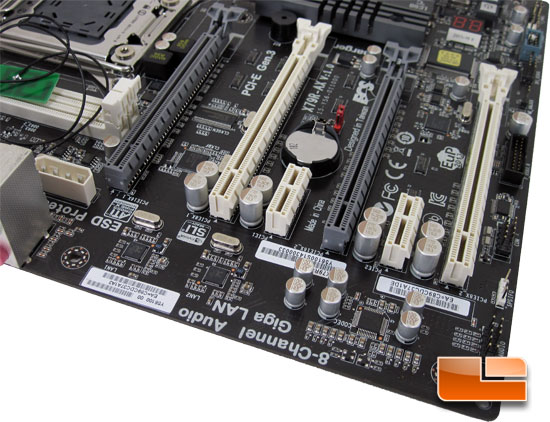 The layout of the PCIe x16 slots on the ECS allows for four dual slot graphics cards to be installed and run in either NVIDIA Quad SLI or AMD CrossFireX. The pair of white PCIe x16 slots are limited to x8 due to chipset limitations. The ECS X79R-AX is also equipped with a pair of PCIe x1 slots. To the right of the final PCIe x16 slot we can pick up where we left off with the internal header for SuperSpeed USB 3.0, followed by a Com header, SPDIF out, and the front panel audio. Along the leading edge of the photo we can see the Realtek ALC892 High Definition Audio Codec, and the pair of Realtek RTL8111E Gigabit LAN controllers. Just to the left of the first PCIe x16 slot is a four pin MOLEX plug to supply additional power to the PCI Express slots when running multiple graphics cards. 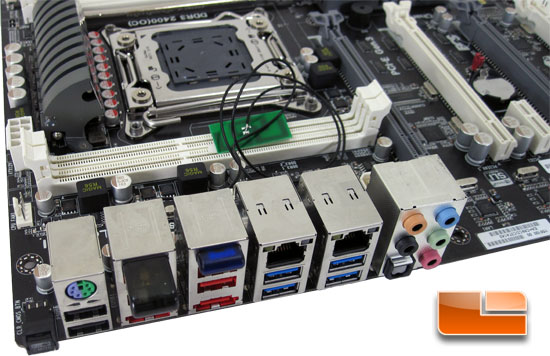 The ECS X79R-AX has a very full featured I/O Panel. We have a grand total of ten USB ports, four SuperSpeed USB 3.0 and six USB 2.0. The single PS/2 port for a keyboard or a mouse is becoming a very typical feature on motherboards today, if they support PS/2 as all which isn’t uncommon either. The longer of the two dongles on the I/O panel is the wireless interface while the smaller of the two is bluetooth. The wireless is a Atheeros AR9271 wireless network adapter and the Bluetooth is a Atheros AR3011 Bluetooth adapter. To the right of the dongles is a pair of RJ45 Gigabit Ethernet jack controlled by a pair of Realtek RTL8111E Gigabit LAN controllers. The poorly coiled up wire behind the I/O panel is coming out of the back of the wireless dongle and is part of the antenna. ECS recommends you mount the antenna below a HDD for the best reception using the double sided tape on one side.