Conclusion – What Is The DDR4 Sweet Spot For Ryzen

After using the AMD Ryzen 7 processors for almost two weeks no on the MSI X370 XPower Gaming Titanium motherboard we’ve found that this processor loves all the memory bandwidth that it can get. The good news is that DDR4 memory pricing is actually pretty reasonable right now and there isn’t much of a price difference between a 2133 MHz memory kit and a 3200 MHz memory kit as all the high-cost DDR4 memory kits are now over 4000 MHz. By going to 3200 MHz over 2133 MHz we were seeing near 50% performance improvement in simple memory bandwidth tests and a 16% performance jump in our 1080P gaming test. Hopefully AMD board markers will update their UEFI builds to allow for higher than 3200MHz memory kit use without needing to mess with the adjusting the bus speed of the processor (RefClck). 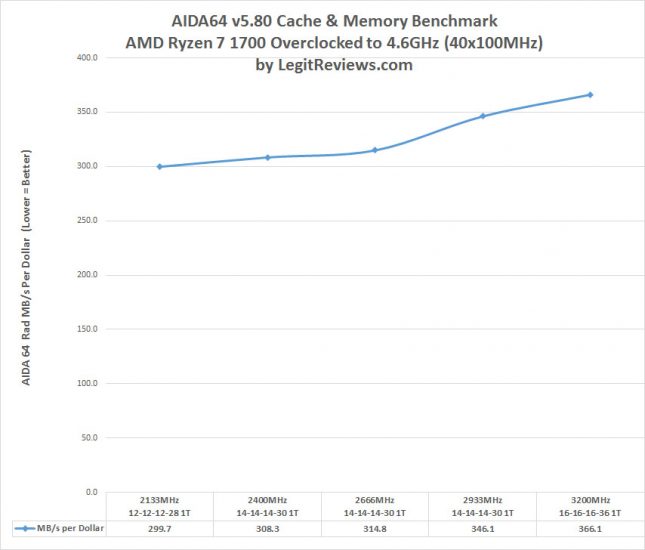 Here is a quick look at the memory read performance on AIDA 64 versus the price you pay for a Corsair Vengeance LPX DDR4 16GB memory kit (first five listed below). As you can see the MB/s cost per dollar spent goes up nicely, so no you have a cost reason to go faster!

We hope that you have a better understanding about picking the right DDR4 memory kit for the new Ryzen processor platform. The AMD Ryzen 7 processor and AMD X370 based motherboards love tight timings and high memory clock speeds, but it is clear that AMD and the board makers need to tune for it. Right now we are very early in production and AMD did not give OEMs final processors until just the final two weeks before the platform launched. Performance has been all over the place as a result, but the latest uCode from AMD has improved things and we expect things to get better form this point on.

If you love memory and want to know more we advise taking a look at this ASUS Crosshair VI motherboard overclocking guide that we ran across on overclock.net as they have some nice nuggets in it. This is a guide aimed at extreme overvclockers and claims that the best DRAM configuration at the moment is 2x8GB Samsung B-die based DIMMs and that the worst configuration is dual-rank 2x16GB, especially Hynix-based DRAM (4xSR is best at the moment if you need 32GB and high speed). Other highlights can be found below.