The Crucial P5 M.2 2280 NVMe SSD series is the first high performance NVMe drive for the consumer market for Micron. The performance of the drive seems to be solid and a premium NVMe drive from Crucial is certainly a welcomed addition to the market. That said, the Crucial P5 seems to be a little late to market as a handful of native PCIe 4.0 controllers should be coming out in the second half of 2020. This PCIe 3.0 based drive would have been great to see released in 2019 where it would have been highly competitive with the Phison and SMI controlled drives that have been popular in the higher-end market in recent years.

Benchmarks like PCMark 10 that use real-world traces to test performance showed the P5 1TB drive having average performance and the drive ended up in the middle of the performance charts. The biggest shock was that the Crucial P5 performed worse than some of the DRAM-less solutions on the market that cost substantially less. We asked Crucial about this and they informed Legit Reviews that Crucial is taking a harder look at PC Mark 10, as they think that there might be some anomalies in the way that it’s handling their architecture. This is something that Crucial was looking at internally before and it sounds like they are looking for the root cause in the hopes that something can be corrected. Crucial just recently made the switch from using PCMark 8 to PCMark 10 internally, so they are still figuring it all out.

That said, more than one SSD manufacturer has expressed concerns with the PCMark 10 results and have been concerned with how much weight to put onto the results. 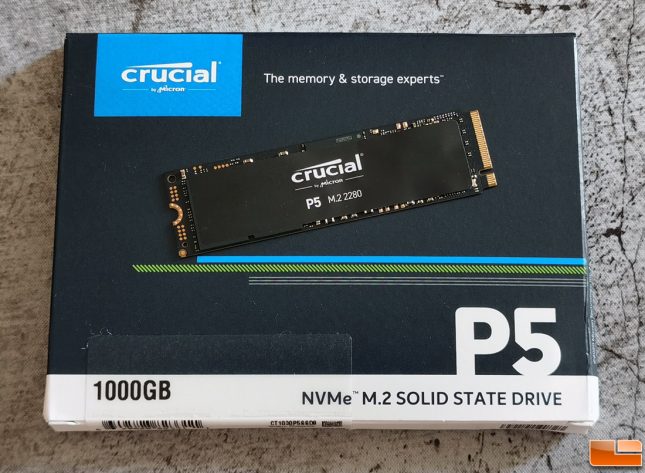 The Crucial P5 drives are backed by a 5-year warranty should any issues pop up. Crucial even offers a 45-day money-back period if you buy the drive direct from them and have any issues.

At the end of the day the Crucial P5 1TB SSD is a solid-performing drive, but it fails to be the ‘extraordinary’ drive that Crucial markets it as being. Maybe the engineering team can work some magic with firmware tweaks down the road, but for now its just another mainstream NVMe drive.