Since these items are sold separately we wanted to take a closer look at each individually starting with the Corsair Vengeance K90 Keyboard. 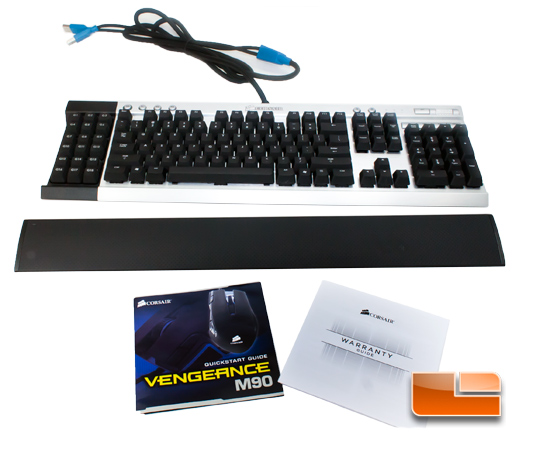 The package comes with the K90 keyboard, a nice removable wrist rest, warranty information, and a small users manual. The optional software is available for download from Corsair’s website. The K90 keyboard is very attractive with the aluminum top plate contrasted with the laser etched keys and reflects a nice blue glow from the LED’s in each key. Also notice the heavy USB cable coming out of the top center of the keyboard nicely sleeved and splitting into two USB 2.0 plugs. One is for the Corsair Vengeance K90 keyboard itself and the other is a pass-through for the USB port on the top edge of the keyboard pictured below. 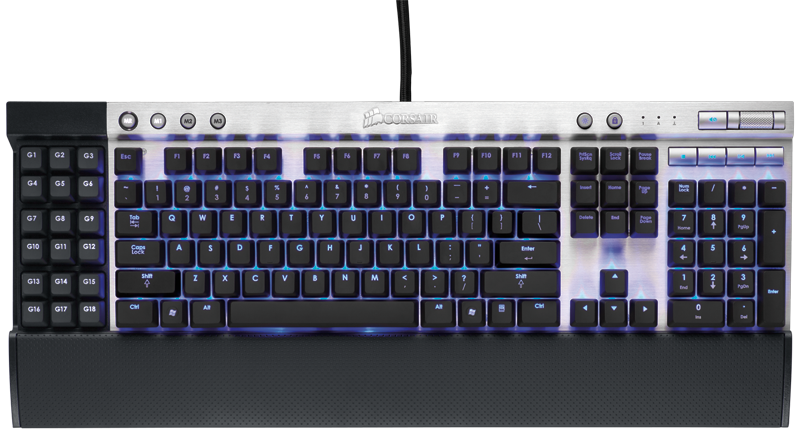 This image from Corsair shows the blue glow reflecting off the aluminum base and notice that not all the keys light up as only the main panel and number pad have LEDs. More on this in a minute.
CORRECTION: The room was bright enough we didn’t notice the G keys are actually faintly lit white and the Delete / Home key bundle has a faint blue. We apologize to our readers and Corsair for originally stating they were not back lit.

If you want to use the included wrist rest you simply snap it on to the front lip and screw it in on both sides. The rest is plastic covered with a thin perforated rubber sheet that should help relive the strain of long gaming sessions. It is well designed and seamless which made it very comfortable over long gaming sessions.
The bottom image highlights something that I just love about this keyboard, the fact that the keys basically float above that aluminum plate and are not surrounded. The reason I like this so much is I tend to eat at my computer during gaming work and occasionally little bits of popcorn or chips falls into the keyboard. With this design they just fall out of the side with a little tilt and blast of air.

The back of the Corsair Vengeance K90 keyboard is simply black plastic with an information sticker placed in the middle of the panel. 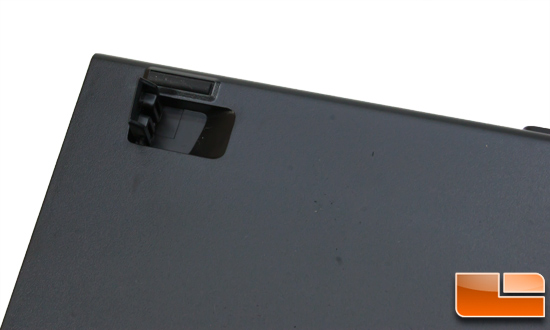 If you are using this keyboard on your desk and prefer a steeper angle for your keyboard there are feet that flip out of the top corners on the back providing 2mm of lift.

Along the top edge of the Vengeance K90 keyboard is the USB 2.0 pass-through port mentioned above. This is great if you want a convenient place to plug in a flash drive or the Corsair Vengeance M90 mouse. If we focus in at the top right corner of the K90 we can see some of the things that make this keyboard different than your run of the mill version. The first round button controls the level of blue LED backlight on each press jumping from 0%, 33%, 66%, and 100% to suit your tastes and room light. Next to that is one of my personal favorite keys, the locking windows button key. If you activate this the windows button key between CTRL and ALT is disabled so you do not accidentally jump out of the game with the start menu up if you happen to hit that window key executing a quick manuver. To the right are the sound and media keys. The sound control is a button to mute / unmute and a rolling barrel knob to adjust volume which works much better than the up down clicking buttons I have used before. Under the volume are the stop, rewind, play/pause, and fast forward media keys. Along the top between the windows lock and volume are three white LED’s showing caps lock, num lock, and scroll lock status. 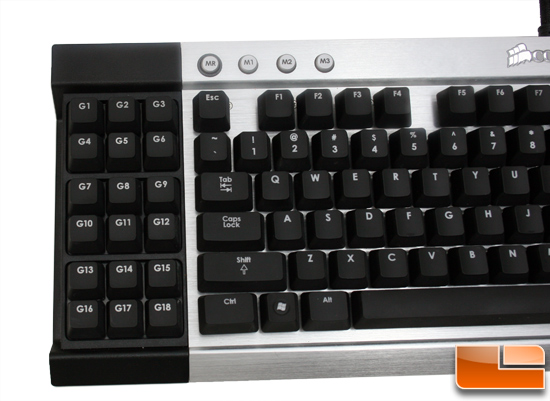 Switching over to the right side is what really makes this keyboard special for MMO / RTS gamers, the 18 key macro pad. Not only does Corsair give you 18 macro keys which should be enough for any hard core wizard, healer, or tank but knowing you might play all three they give you three memory buttons for a total of 54 potential macros. To record your macro set you can either use the software or do it on the fly right from the Vengeance K90’s MR button. Switch characters, no problem just hit the numbered M button that corresponds to that toon. The only issue we had with so many macro keys is that there is no simple way to label them so you either have to have a great memory or cheat sheet. It would have been great to have removable key covers with simple paper inserts to label the nuke set from the healing set. Nothing worse than nuking the boss when you meant to heal the tank. 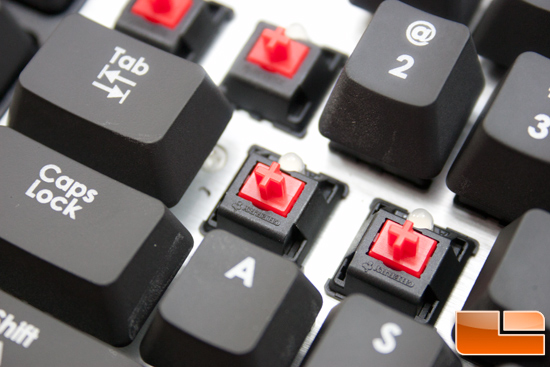 Today there is a big trend toward mechanical keyboards for gamers because of the faster response time and the fact you do not have to press the key to bottom in order to register a key stroke. This makes for lighting fast multi key combos and an audible click as feedback. The king of mechanical key switches is the Cherry corporation and they make several versions of their high end MX series depending on the type of action a manufacturer is looking for in their keyboards. Corsair picked the Cherry MX Red keys which is preferred by those who like a soft touch and moderate click feedback. They also increased the more common KRO-6 for USB keyboards to KRO-20 (20 key rollover) which means you can press up to 20 keys at the same time and they will register. Bit of overkill given only 10 fingers but nice to know you won’t die in the heat of battle due to a missed key press.

These graphics from Overclock.net show the difference between Cherry MX red used in this keyboard and Cherry MX blue used for example in the Razor Blackwidow Ultimate mechanical keyboard (my daily use keyboard). That notch on the white plunger makes a loud tactile click and causes quicker activation in exchange for slightly delayed return where the red version is a smoother and softer click between on and off states. One is not necessarily better than the other, it is all personal preference. 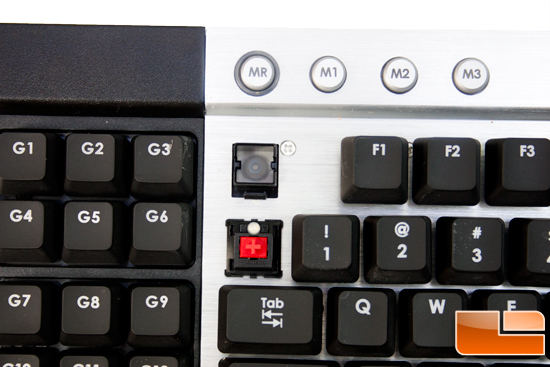 One way Corsair tried to reduce cost was to mix the expensive Cherry MX mechanical keys with much less expensive tuned silicon dome activation keys found on value keyboards. For the Vengeance K90 the F1 through F12, Esc, PrtScn, Scroll Lock, Pause/Break, Insert, Home, Page Up Page Down, Delete, and End keys are silicon domes but least they are silicone for better longevity. I found that I did not really notice that these keys not being mechanical hampered my game play at all. I use the ‘F’ keys so rarely in game that I think it is great that Corsair was creative in ways to minimize the cost of a gamer grade keyboard while still providing high end keys elsewhere.
Questions or comments? View this thread in our forums!