Ever wonder what the memory companies use to test their modules? So did we, and we found out that they use the RAM Stress Test Professional (R.S.T. Pro). Well, one thing led to another and we went out and picked up the R.S.T. Pro to use in this review. What is the R.S.T. Pro? It is a Self-Booting, Operating System Independent memory diagnostic card for exercising and validating RAM. The R.S.T. Pro runs all tests in protected mode which can completely and thoroughly test up to 64 gigabytes of memory. This utility provides users the options of running sophisticated test patterns to detect hard to find memory errors, which are not detected by other test software.

While using the R.S.T. Pro we were able to find memory errors that other testing methods could not find or reproduce. Since we want and encourage our readers to follow up our testing on their own we also used the free testing program called Memtest86 which is a stand alone memory test for x86 architecture computers that boots off a floppy disk. We will go ahead and show the actual errors detected on Memtest86, as it is free and everyone can check into it.

We would also like to note that the errors found in test 5 and 8 do not mean the memory is faulty. As the Memtest86 homepage states: “Errors from this test [5 & 8] are not used to calculate BadRAM patterns.”

We also ran Prime95 while running loops of 3dmark2001 for a minimum of six hours to make sure that under hours of stress and heat buildup that the modules were truly stable.

We considered memory stable when it was able to run 1 extended pass of Memtest86, six hours of Prime95/3dmark testing and without locking up while running all tests on the RSTPro. Many consider if any errors are found using the RSTPro or Memtest86 testing methods the memory has failed. Since 3 of our 6 modules would have failed from testing the modules at default timings we kept going.

By this combination we feel that this review is contains some of the most accurate testing ever completed in terms of memory stability. Sure, not everyone will agree with our stability testing methods, but we can try to make the majority happy! 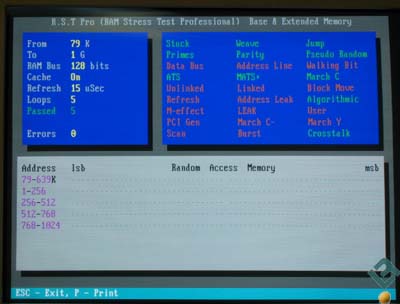 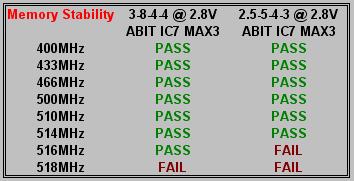 Sure we could get our Corsair XMS Pro modules to run some benchmarks at 534MHz, but when put through some stability stress testing we found the top end of the memory to be 516MHz at default timings and voltages. Once we dropped the timings we found the max to be 514MHz. These are pretty good numbers for having this memory at aggressive timings beyond 500MHz.