Corsair’s NEXUS companion is an interesting device. It has a lot of potential in what it would be able to perform. With its current software version, you can set many options for your other iCUE devices or setup buttons to launch applications with custom buttons and backgrounds. It would be nice to see some additional options like interfacing with OBS to be an addition to it like the stream-deck. The idea of being able to control scene switching with this device would be a greatly appreciated addition to it. It’s interesting to see what additional games the NEXUS will be able to link with providing addition actions to be performed in a way that it provides essentially additional keybindings. For example, in PUBG, having the option to touch a button to use a healing item or changing seats in a vehicle might be useful. The fact is, we don’t know what’s useful and not useful until we have the ability to utilize the options. The NEXUS from Corsair has the potential to because a sort of smart device for your keyboard and computer in way just like your cell phone is. the potential of the device is only limited to the imagination of the developers. 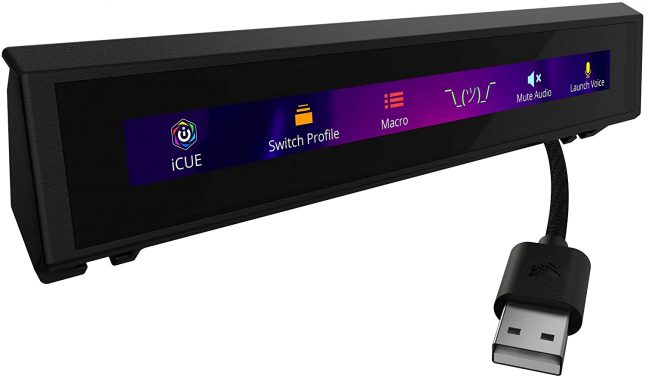 The Corsair NEXUS is a cool product and will make a great peripheral addition your computer, whether it be at an enterprise level for launching scripts, opening multiple applications quicker or at consumer level to other tasks as well. You can make executable scripts and have them launch when your press its respective button or you can simply use it as eye-candy by adding custom backgrounds to it. Being able to see your system temps, loads or voltages provides additional simplicity as you don’t have to run other 3rd party software to see them. You can simply display them at all times or on-demand at the swipe of a finger. You can customize your NEXUS to perform what you want, giving you the options to you want to make your experience with the device unique. For its price of $99.99 shipped, 2yr warranty and its capabilities, the NEXUS is a great addition to add to your gaming PC!