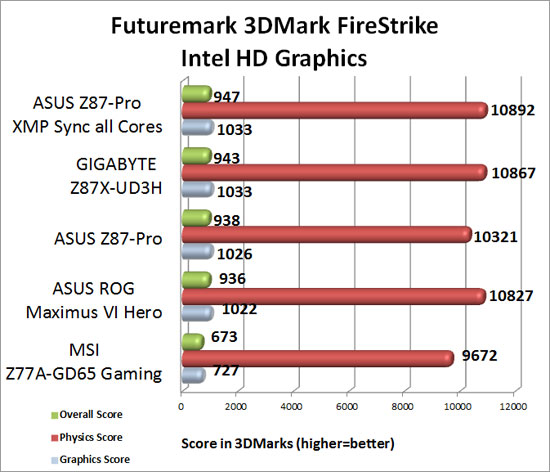 Benchmark Results: All of the Intel LGA1150 motherboards run the Intel Core i7-4770K “Haswell” processor with Intel HD Graphics 4600 and the results are fairly close. The ASUS Z87-PRO LGA 1150 scores on par with the other Intel Z87 boards on the GPU test section, but the physics score was 500 points lower. Once we discovered the issue that the XMP Profiles were being configured differently between the boards, we decided to run the ASUS Z87-Pro both ways. Enabling the ‘Sync All Cores’ in the ASUS Z87-Pro UEFI BIOS brought our results right inline with our other Intel ‘Haswell’ Motherboards. Our physics score was 10892 points versus the original 10321 points. 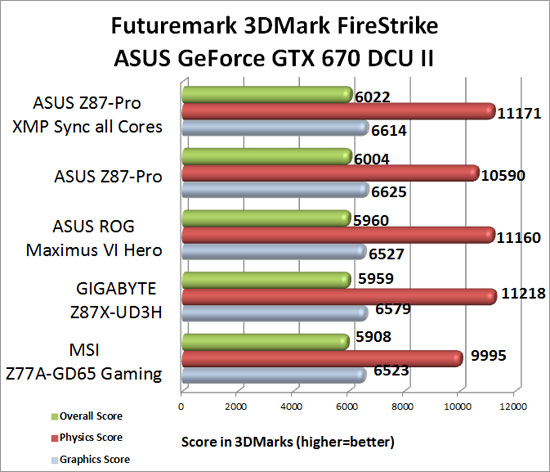 Benchmark Results: When it comes to discrete graphics performance we used an ASUS GeForce GTX 670 DirectCU II video card and again saw the ASUS Z87-Pro running faster than the GIGABYTE Z87X-UD3H and the ASUS ROG Maximus VI Hero motherboards in the overall and graphics tests, but lower in the Physics test. Once we ran the system with the system to sync all cores everything was spot on with our other boards again.