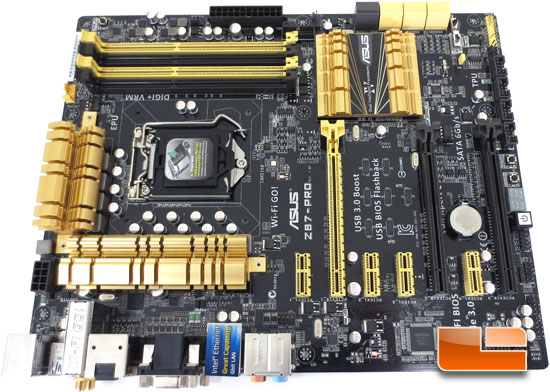 I’m not typically one to care about colors, but I’m not a fan of the black and gold look that ASUS has started using with their Intel Z87 motherboards. With that being said, ultimately the color combination doesn’t matter to me as long as the motherboard has the performance and features that I’m looking for when building a system. As we’ve seen so far the ASUS Z87-Pro certainly isn’t lacking in features. For the most part the ASUS Z87-Pro has a typical layout, Intel LGA1150 over on the left, PCIe x16 Gen 3 slots on the right, ASUS puts a lot of work in to the layout of their board so let’s take a closer look at the more ASUS specific features. 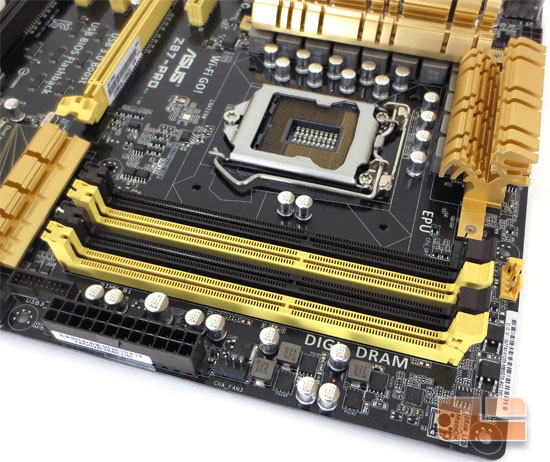 The ASUS Z87-Pro motherboard features the standard four DIMM slots and will support memory up to 3000MHz(O.C.) and a maximum of 32GB! To the right of the DIMM slots is the CPU 4pin fan header (gold) as well as the optional CPU 4pin header. To the left of the ATX form factor mounting hole is the DRAM LED and MemOK! button. The MemOK! button will help to remedy any memory compatibility issues your system may have. Personally I have never needed to use the MemOK! feature, all the memory I have used has worked great on previous generations and I expect that Intel Z87 won’t be any different. Continuing our tour of the Z87-Pro, we can find a 4pin Chassis fan header with the 24pin motherboard power just beyond. 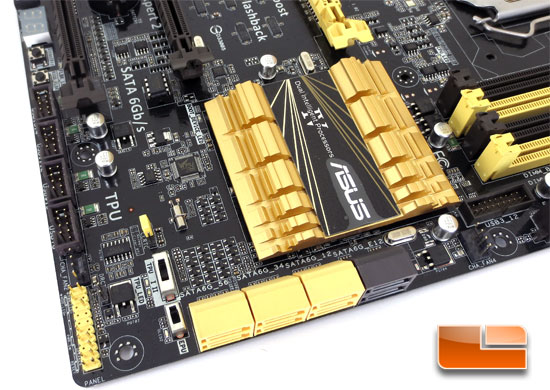 The ASUS Z87-Pro is equipped with eight SATA III 6Gbps ports, though with the latest Intel Z87 chipset six are native to the chipset and only two are from a third party. In the case of the ASUS Z87-Pro we have a ASMedia ASM1061 to thank for the dark brown SATA ports. To the left of the SATA ports as a pair of switches, the EPU switch when enabled can and does help conserve power. The TPU switch will tune your system for performance, so it all depends on what your mood and need are as to which one you might use. Running our eyeballs up the edge of the ASUS Z87-Pro we can see the pin-out for the front panel which includes the power/reset switches, HDD activity lights, Power LED, and the system speaker. Following the front panel pin-out is a 4pin Chassis fan header and four internal USB 2.0 headers. 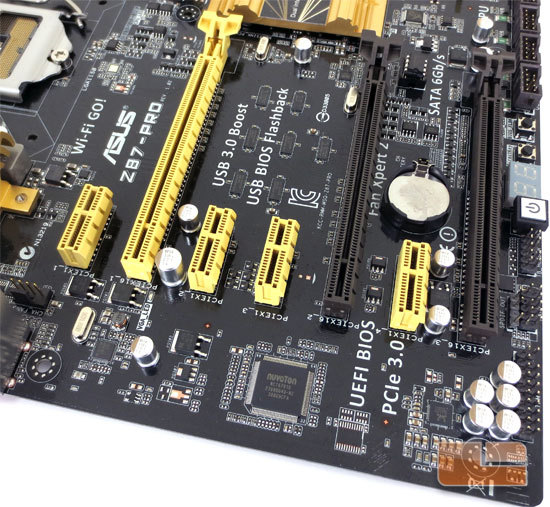 Swinging the ASUS Z87-Pro we can start making out the various chips that give the ASUS Z87-Pro the technology that make it the board it is. Next to the group of five capacitors we can see the Realtek ALC1150 high definition audio codec, moving right we have the Nuvoton NCT679ID Super I/O controller. Behind the various chips is the ever-so-important expansion slots. The ASUS Z87-Pro features three PCIe x16 slots, though running dual cards in the gold and first black slot will limit the bandwidth to x8. The second black PCIe x16 slot is limited to x4. Along the edge of the PCB we can see several of the onboard buttons, the first one this side of the internal USB 2.0 slots is the BIOS flashback followed by the DirectKey which brings the UEFI BIOS up on the next boot. Be aware though, the DirectKey shuts the system down as soon as you press it. Continuing down the edge of the ASUS Z87-Pro we have the Debug LED, Power button, TB_Header, front panel audio, and the T.P.M. (Trusted Platform Module) header. 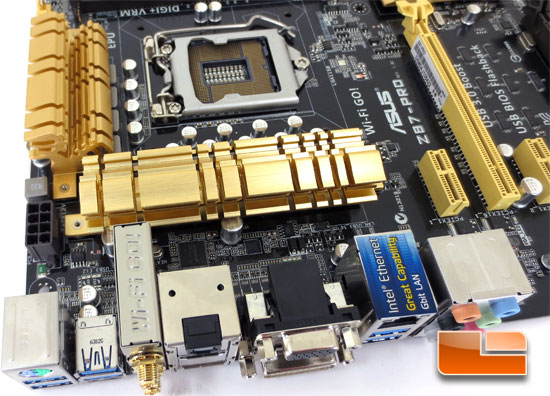 Looking down at the top of the I/O panel and the back corner of the ASUS Z87-Pro motherboard we can see that there is a single 8pin CPU power plug along the edge of the PCB.

One of the standout features of the Intel Z87 Chipset and Haswell processor combinations is the ability to drive three monitors without the use of a discrete level graphics card. In order to accomplish this tast the ASUS Z87-Pro has four different display adapters on the I/O panel, 1xHDMI, 1xDisplayPort, 1xVGA, and 1xDVI. In addition to the display options ASUS has equipped the Z87-Pro with six SuperSpeed USB 3.0 ports. four of which are run off of the ASMedia controller and two are native to the Intel Z87 Chipset. In case you’re wondering the four ASMedia SS USB 3.0 ports are on the left while the two Intel Z87 SS USB 3.0 ports are directly under the RJ45 jack. To the right of the ASMedia USB 3.0 ports we can see the antenna plugs for the Wi-Fi Go!. If you’re looking for audio connections there isn’t much missing on the ASUS Z87-Pro, we have an Optical SPDIF out as well as the usual six 3.5mm audio ports. The RJ45 network jack is powered by the Intel I217V Gigabit LAN controller.