Since video card temperatures and the heat generated by
next-generation cards have become an area of concern among enthusiasts
and gamers, we want to take a closer look at how the graphics cards do
at idle and under a full load. 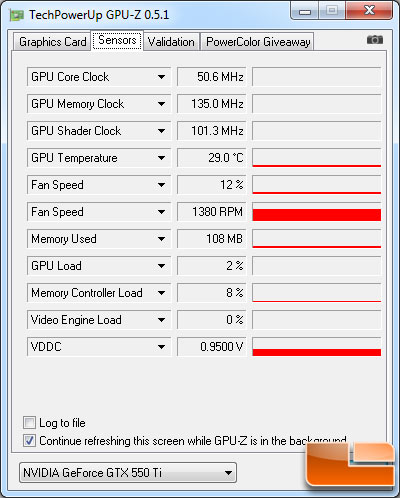 As you can see from the screen shot above, the ASUS Ultimate GeForce GTX 550 Ti had power idle states of 50.6MHz on the GPU core clock and 135MHz on the memory. These clocks
combined with the custom ASUS designed cooler showed that we had an idle temperature of just 29C in a room with a temperature of 21C.

We fired up FurMark and ran the stability at 640×480, which was enough to put the GPU core at 100% load in order to get the highest load temperature possible. This application also charts the temperature results so you can see how the temperature rises and levels off, which is very nice. The fans on the video card was left on auto during temperature testing. When we hit the space bar to stop the rendering the temperature dropped. 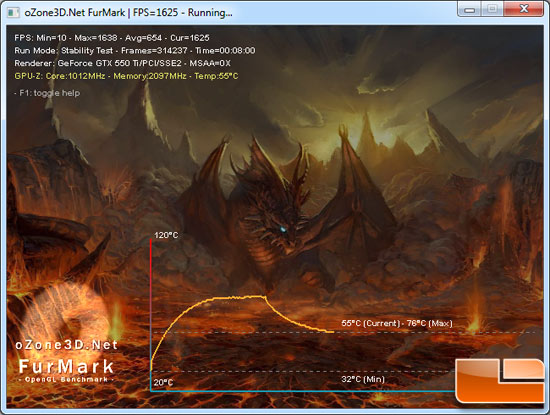 The ASUS Ultimate GTX550 Ti 1GB peaked at 76C according to Furmark, but we noticed that the fan speed and noise barely budged. The fan on the ASUS Ultimate GeForce GTX550 Ti couldn’t be heard over our Titan Finrar CPU cooler, so it’s pretty darn quiet. 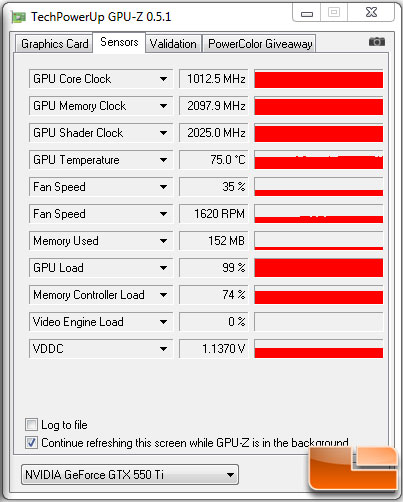 One thing that shocked us is that at full load with the card at 75-76C that the fan wasn’t loud at all. We opened up GPU-Z and it showed the fan was running at 35% at only 1600 RPMs. The ASUS Ultimate GTX 550 runs at 12% fan speed at idle and 1400RPM, so the fan speed difference between idle and load is just 200 RPM!  If you want better cooling performance you can manually increase the fan speed with an application like EVGA Precision.