Today we will be taking a look at the ASUS TUF Gaming GeForce RTX 3070 graphics card that is being sold under part number TUF-RTX3070-O8G-GAMING. This fully custom card is priced at $559.99 and comes with a large triple fan GPU cooler, RGB lighting and military-grade components. The GeForce RTX 3070 delivers performance comparable to the GeForce RTX 2080 Ti at less than half the price, so these cards have the attention of gamers that are looking to max things out on 1440P gaming monitors. It will also be something that 1080p eSports players will be interested in as it will deliver more than enough frames on those high-refresh rate 1080P displays that are popular today. 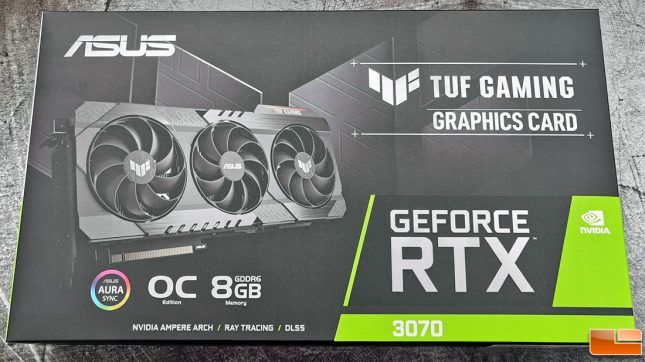 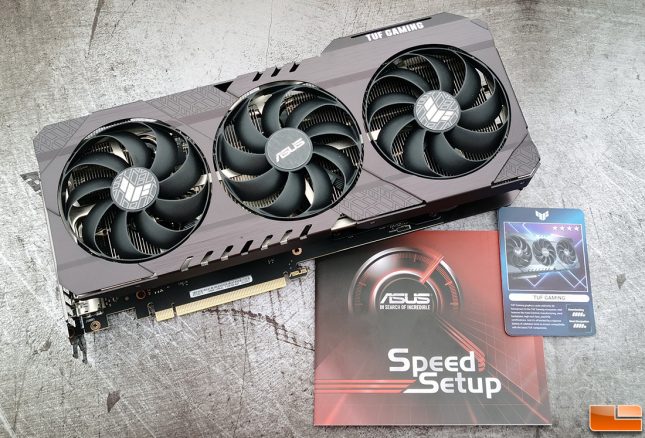 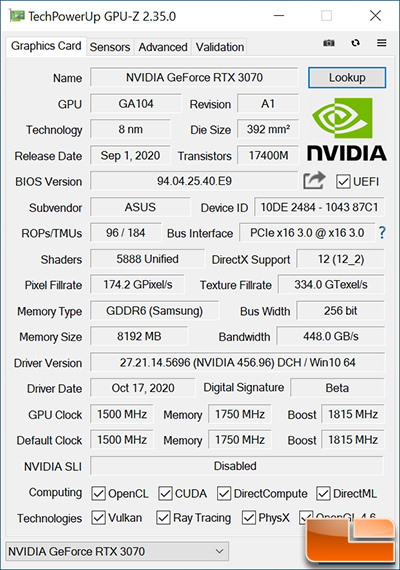 The NVIDIA GeForce RTX 3070 Founders Edition ships with a 1725 MHz boost clock and the ASUS TUF Gaming GeForce RTX 3070 comes factory overclocked with a boost clock of 1815 MHz with the default ‘Gaming Mode’ option. This is +90MHz overclock on the boost clock that could possibly offer about a 5% performance increase. The boost clock is a theoretical value that gives one an idea about where the cards should be running at on real game titles. The card features 8GB of Samsung GDDR6 running at 14Gbps, which are the same memory speeds as the 3070 Founders Edition. 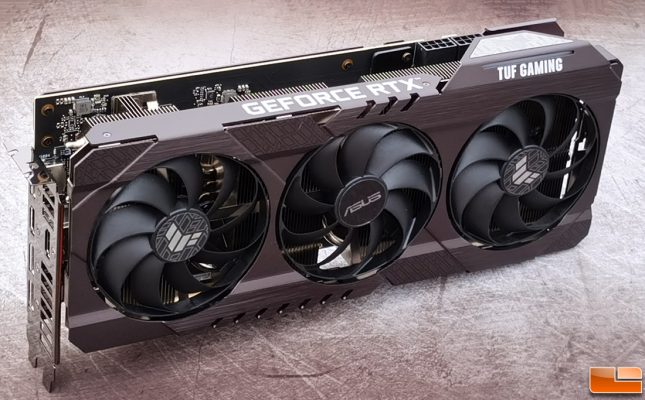 This ASUS card measures 11.81-inches in length (300mm) and stands at 5.00-inches in height (127mm). A quick trip over to the scale revealed the ASUS GeForce RTX 3070 TUF GAMING weighs 2 pounds 7.6 ounces or 1.122 kilograms. The aluminum fan shroud on the front of the card has an industrial appearance with grayscale colors to ensure it works in any PC build. 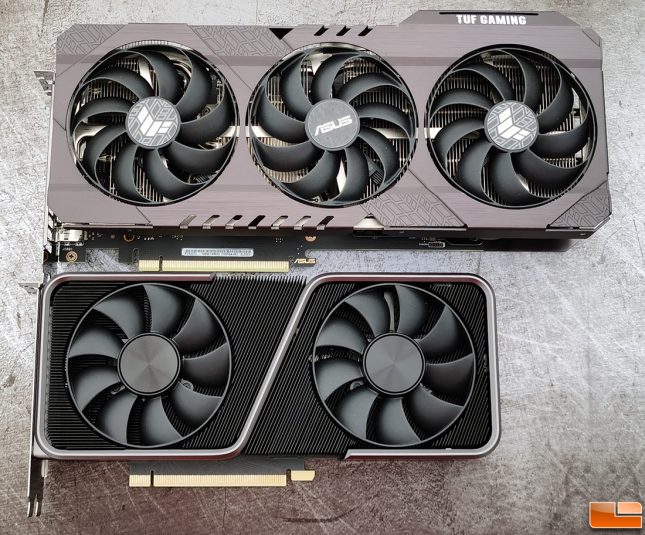 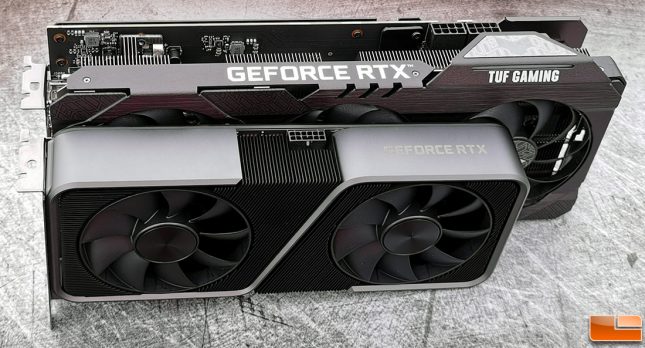 Actually, this image better shows the length and height differences. Another thing to point out is that the ASUS TUF Gaming GeForce RTX 3070 is a 2.7-slot card, so it will take up basically three slots in your case. The 3070 Founders Edition is a true 2-slot card. 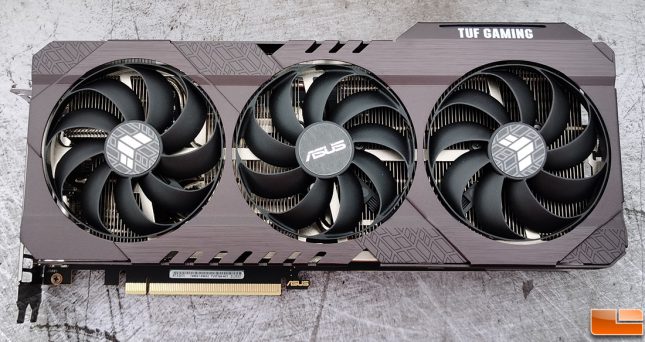 The GPU cooler on this TUF Gaming card features a beefy fin stack that is topped by three axial-tech dual ball bearing fans. ASUS fine tuned the fan rotation to reduce turbulence and when the GPU temperature drops below 55C the fans turn off. Under the fans ASUS used TUF components, which means they went with top-shelf military-grade chokes, MOSFETs and capacitors. 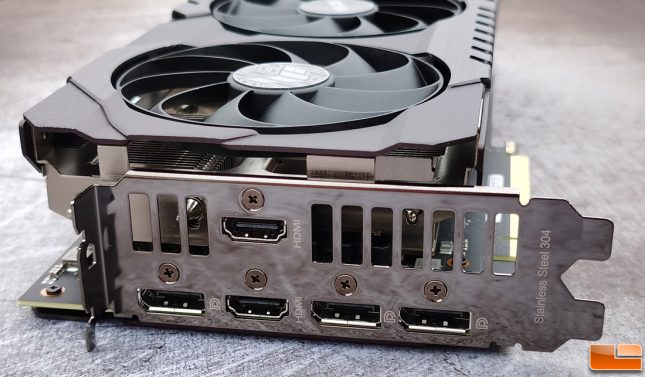 ASUS switched up the display outputs on the GeForce RTX 3070 TUF Gaming a bit and many people will be happy with what they have done. Most GeForce 3070 cards have three DisplayPort 1.4a connections and a single HDMI 2.1 port. ASUS went with three DisplayPort 1.4a connections and two HDMI 2.1 ports! So, if you want a card with two full sized HDMI outputs be sure to put this one on your short list.

Notice that the backplate is stamped as being made from Stainless Steel 304. ASUS picked to use Stainless Steel for the I/O bracket as it is stronger and helps protect the ports better. 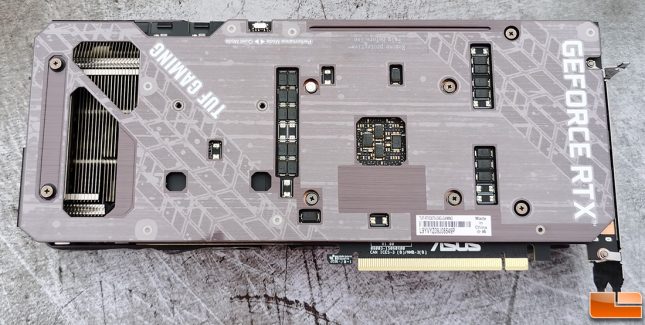 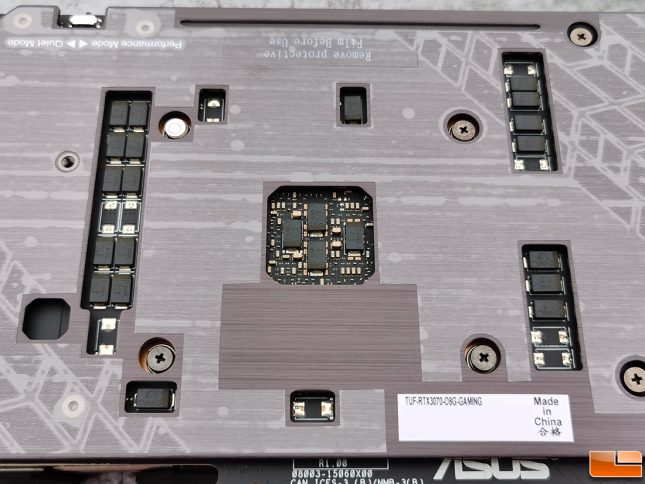 The GeForce RTX 3080 launch made talking about POSCAPS (SP-Caps) a big deal, so we looked and discovered the ASUS GeForce RTX 3070 TUF Gaming uses four POSCAPS. We experienced no stability issues whatsoever on our review sample. 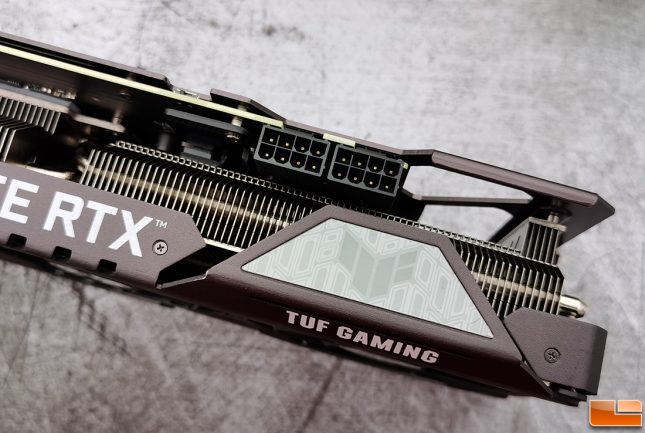 ASUS is using two 8-pin PCIe video card power connectors to deliver power to the 3070 TUF Gaming card. Each power connector has LED lights on the back to let you know if the power cables are correctly connected. 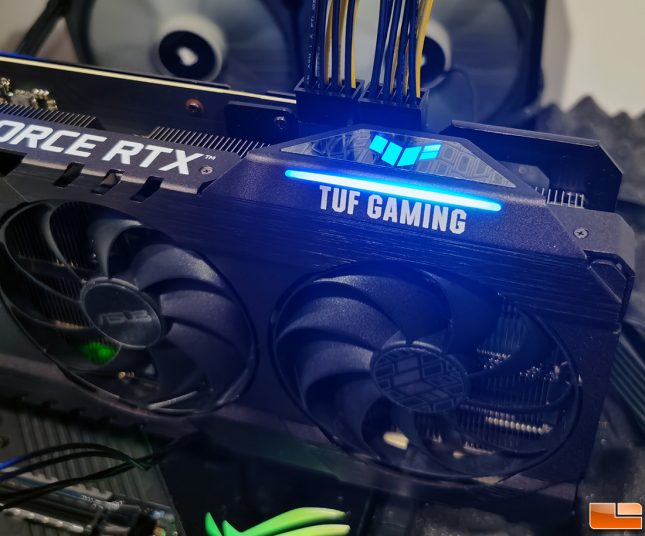 ASUS added a bit of RGB to the front of the TUF Gaming 3070 card and this can be customized to be any one of a wide range of colors and can also be programmed to run different lighting modes. Yes, you can also sync it with your other ASUS components to keep your boards lighting uniformed. 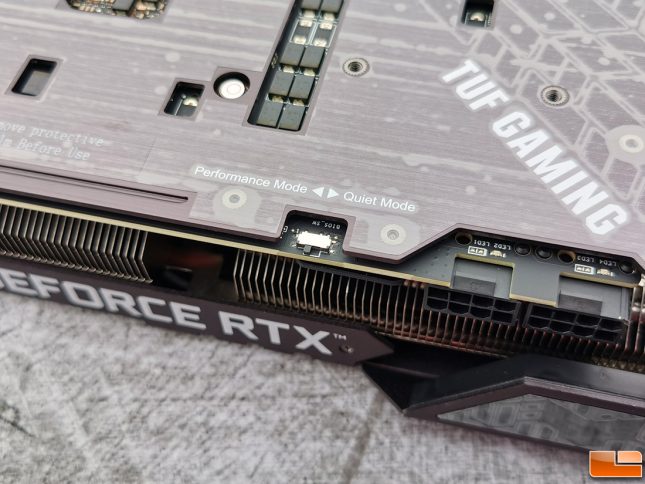 Along the back of the top edge of the 3070 TUF Gaming you’ll find a switch that allows you to between the cards two BIOS chips. Not all cards have a dual-BIOS setup, but it is something nice to have if one should ever fail or get corrupted. The card ships in ‘performance’ mode as that is the default setting. The other model is for quiet mode that runs the cards three fans on a less aggressive fan curve. We tested the 3070 TUF Gaming card in its default ‘performance’ mode.

Looking up from the bottom of the card you can see the three cooling fin arrays and some of the 5 heatpipes that are running through the card. The heatpipes don’t make direct contact with the GPU, but they attach to a ‘MaxContact’ polished plate that does. 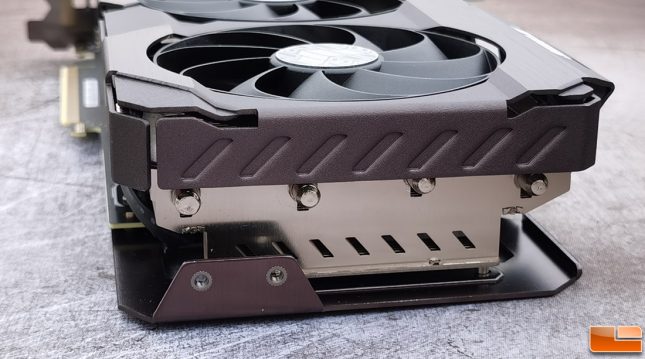 On the end of the ASUS GeForce RTX 3070 TUF Gaming 8GB OC Edition card again see some of the heat pipes and the holes that been stamped into the aluminum cooling fins to optimize the airflow across the array. The two screw holes in the backplate are for an optional extender bracket. Some OEM/SB systems use these and is by no means required as it is optional. Most GeForce RTX 30 series cards have this option.

Let’s check out the test system and benchmark this card!