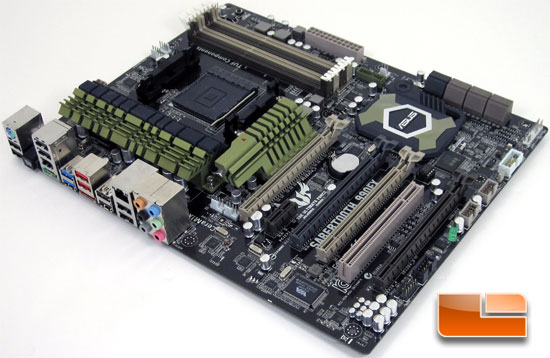 When I first looked at the ASUS Sabertooth X58 motherboard I decided I really liked the look of the Sabertooth series of motherboards. The ASUS Sabertooth 990FX is no different in look and I really like the overall look. Unfortunately, looks aren’t what counts; if a board doesn’t perform, it may as well be a paper weight. Fortunately, ASUS has a history of top performing boards so I doubt performance will be an issue when we get to testing. 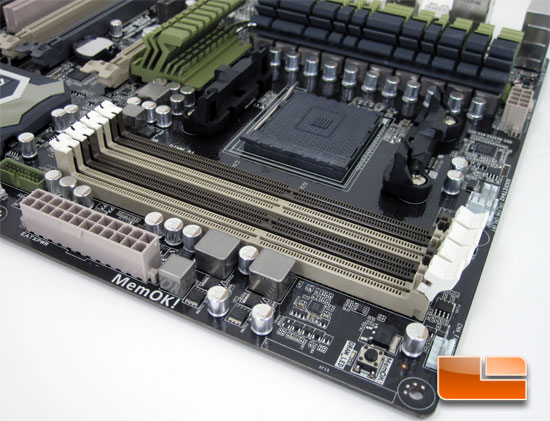 Starting out looking at the memory slots, we have the typical four slots that will run in Dual channel. The ASUS Sabertooth 990FX will support up to 32 GB of memory with speeds up to 1866MHz. In the corner we have the MemOK button which will aid in memory compatibility issues. 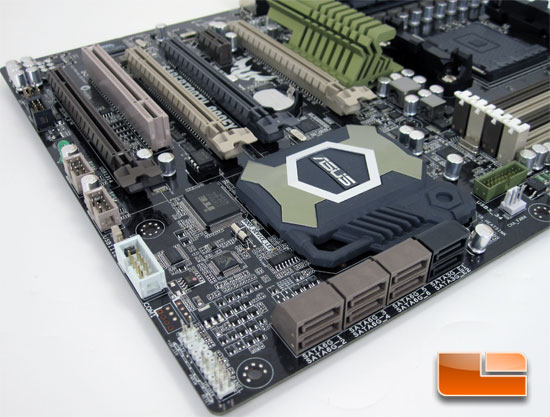 Swinging the ASUS Sabertooth 990FX motherboard around we can catch a look at the eight SATA ports. Six of the ports are SATA III ports and are controlled by the AMD SB950 chipset while the pair of black SATA II ports is controlled by the JMicron JMB362 controller. The passive cooler on the Sabertooth 990FX SB950 chip uses CeraM!X Heatsink coating tech. The CeraM!X coating has a microscopic irregular surface which increases the surface area for improved cooling which in turn improves system stability! To the right of the SATA ports is a 3pin fan header. Above the header is the front panel USB 3.0 header. I like the location of the USB 3.0 header since being at the edge will make the cable easier to hide. Working our way up the left side of the photo we have the pin out for the front panel, com port, CMOS clear jumper, and a pair of internal USB 2.0 headers. 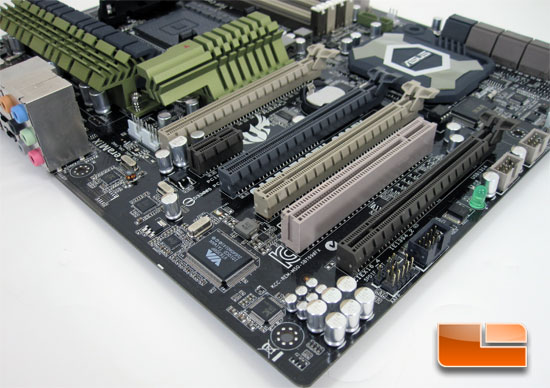 Rotating the board around to get a better look we can see the layout for the expansion slots. The ASUS Sabertooth 990FX has four PCIe X16 slots. When running dual graphics cards in either SLI or CrossfireX you place them in the first and third slots. In a dual card configuration the Sabertooth 990FX will run at x16/x16; with three cards it will run at x16/x8/x8. The Sabertooth 990FX motherboard has a single PCIe x1 slot as well as a single PCI slot. Taking a look at the features and internal connectors along the edge once again, the black header next to the PCIe x16 slot is the internal IEEE1394 (Firewire) followed by the front panel audio and SPDIF headers. Rounding the corner we have the Realtek ALC892 HD audio codec and the VIA VT6308P IEEE1394 host controller. Just past the VIA IC is the ASUS ASP0911 Tprobe controller. Beyond the Tprobe controller is the JMicron JMB362 SATA II controller, and the final chip along this edge is the Realtek 8111E Gigabit LAN controller. 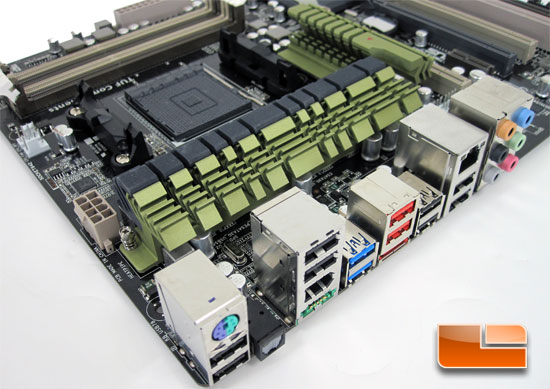 Taking a look at the back panel, we can see the common ports. There is a total of 12 USB ports, 10 of which are USB 2.0 and 2 of which (blue) are the Super Speed USB 3.0. We can see a single powered eSATA port (green) and a non powered eSATA port (red). Both eSATA ports run at SATA II speeds and are controlled by the JMicron JMB362 controller. The ASUS Sabertooth 990FX has a single PS/2 port that will connect to either a keyboard or mouse. We also have the typical six audio jacks as well as an optical SPDIF port. 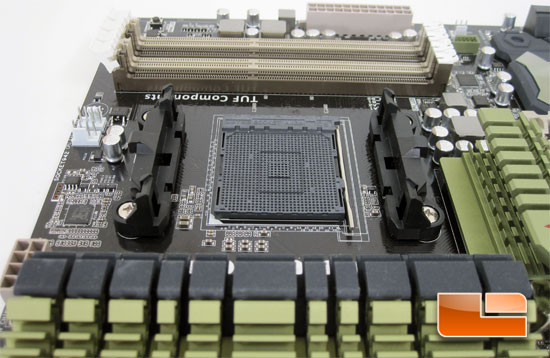 One of the first things that I noticed about the ASUS Sabertooth 990FX is the area around the socket. ASUS has minimized the CPU cooler mounting bracket to just the ends. I’m sure that if you are using a down draft cooler this will aid in airflow to the TUF Caps, TUF Chokes, DIMMs and heatsink assemblies. 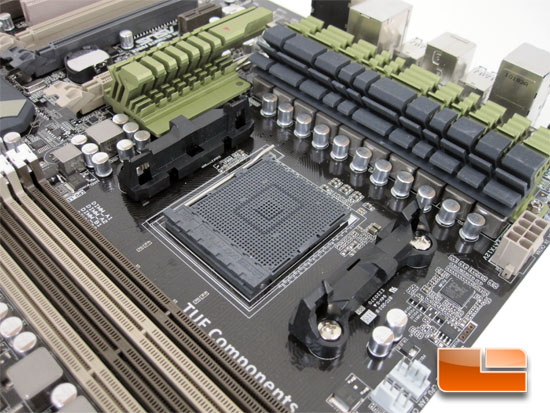 This is just another angle of the AM3+ socket. The Black socket indicates that this is an AM3+ socket that will support the up and coming “Bulldozer” Processors. The new AMD FX processors will have up to eight cores and a TDP of 140 Watts.